The stock market managed to get a slight rebound on Tuesday morning, making up for a small portion of the massive losses that it suffered on Monday. Volatile expectations about trade negotiations are keeping investors on their toes. As of 11 a.m. EDT, the Dow Jones Industrial Average (DJINDICES:^DJI) was up 70 points to 25,788. The S&P 500 (SNPINDEX:^GSPC) rose 13 points to 2,858, and the Nasdaq Composite (NASDAQINDEX:^IXIC) gained 50 points to 7,776.

Even as geopolitical issues heat up, earnings season keeps moving forward, and Walt Disney (NYSE:DIS) will report its latest results this afternoon. Meanwhile, some investors are nervous about the stock sales that Amazon.com (NASDAQ:AMZN) founder and CEO Jeff Bezos has made over the past week and what they might say about the e-commerce giant's prospects.

Shares of Walt Disney were up 1% as investors got ready to hear the latest from the House of Mouse when it releases its fiscal third-quarter financial report this afternoon. The entertainment giant has made a host of strategic moves aimed at fostering growth, and those watching the stock will want to see whether there are any early signs of success from those efforts. 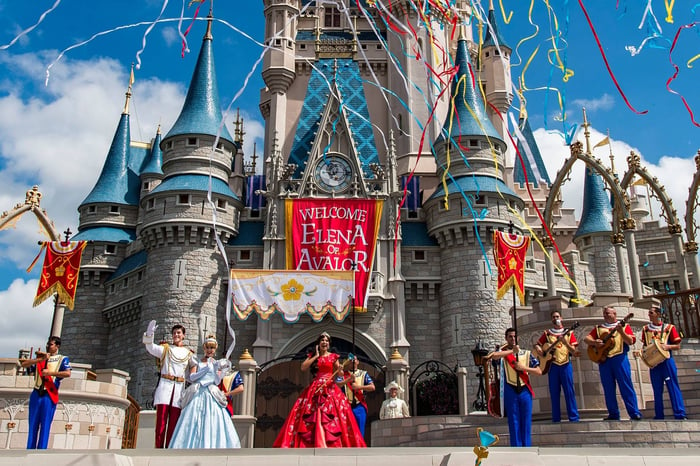 On the movie front, Disney will undoubtedly have a blockbuster quarter. Between Avengers: Endgame, Toy Story 4, Captain Marvel, and the release of the new live-action Aladdin, the company will see record-breaking results at the box office.

Yet what's less certain is how Disney will perform in other respects. The acquisition of Fox's television and movie studio assets should have a positive impact, but investors will want to see how the combined company's reorganization works out. Some industry watchers are nervous about theme park attendance trends, and Disney's media network presence has been going through transition. But even though those factors could all weigh on the bottom line, most long-term investors will keep their eyes focused squarely on the long game for the entertainment titan.

Ups and downs for Disney are inevitable. Yet the company's resiliency has been noteworthy even in the face of industry disruption, and it's hard to bet against the animation giant's ability to weather storms and emerge stronger than ever.

Shares of Amazon.com were up a fraction of a percent Tuesday morning, regaining a bit of ground after a tough Monday. Not only did the e-commerce giant's stock fall in the overall market swoon, but many shareholders questioned whether the company founder's big stock sales reflected a loss of confidence in Amazon.

What Bezos plans to do with the money isn't entirely clear. The Amazon CEO has said that he intends to fund his Blue Origin space company with capital generated by selling shares, and that'll take significant amounts of money to realize its full potential. At the same time, it's possible that Bezos will use cash for personal reasons as his lifestyle changes.

Big insider sales are always scary, but these shouldn't come as a surprise to Amazon investors. Even with the selling, Bezos remains committed to Amazon both personally and financially, and the stock moves shouldn't affect the company.