In stark contrast to the space race of the 20th century, which saw governments compete with each other, the modern space race is primarily taking place in the private sector. This is partly due to waning interest from governments in space missions, but it is also due to potential commercial opportunities to launch satellites and create new modes of human transportation.

The three companies that get the most attention are SpaceX (backed by Tesla CEO Elon Musk), Blue Origin (backed by Amazon CEO Jeff Bezos), and Virgin Galactic (backed by entrepreneur Richard Branson).

With the upcoming IPO of Virgin Galactic via a reverse merger with Social Capital Hedosophia Holdings (NYSE:IPOA), it's as good a time as any to learn about the leaders in the commercial space sector.

Starting with Virgin Galactic -- the company was founded in 2004 and has spent the last 15 years developing rocket technology and assembling vehicles capable of transporting humans into space. Virgin Galactic has been very public about its goal of becoming a space tourism business, but it also believes it can disrupt long-haul travel if it can get the cost of space travel down enough. 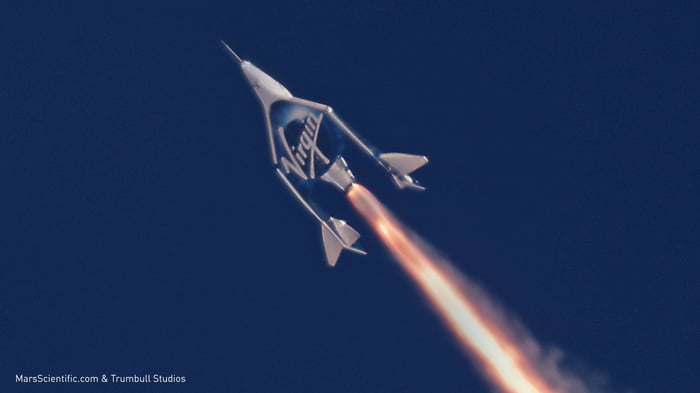 Virgin Galactic is poised to become the first commercial space transportation and tourism business when it starts flying passengers in 2020. It sounds like a ridiculous premise for a business, but the company already has collected $80 million in deposits for its first 600 reservations. The going rate for a tour package is $250,000, which includes a four-day itinerary of training for the journey culminating in a flight where guests spend a full 90 minutes in space.

The company is further along than peers in human space travel in several regards. First, Virgin Galactic has completed test flights with humans onboard its spacecrafts, earning it the first FAA approval for commercial space travel. Second, the company owns an airfield in New Mexico that doubles as a spaceport providing luxury accommodations and training facilities for guests. Finally, Virgin Galactic's IPO will give it access to the public markets, elevating its visibility as a company.

SpaceX was founded in 2002 by Elon Musk, who continues to serve as its CEO. SpaceX is the most successful commercial space start-up ever, measured by its valuation, after raising capital from the private markets at a $33 billion implied value. Musk's long-term ambitions for the company include colonizing Mars, but for now, the company makes money as a contract provider of rockets that deliver government and commercial payloads into space. 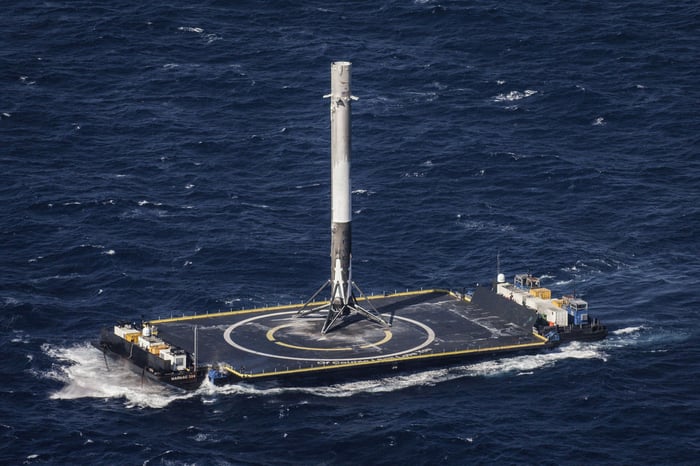 The game-changing innovation is SpaceX's reuseable heavy-lift rockets, the Falcon 9 and next-generation Falcon Heavy. The company has very publicly and repeatedly demonstrated its ability to successfully launch heavy rockets into space and land key components on platforms in the ocean, rendering them reusable. By reusing rockets, SpaceX has been able to reduce the cost of its space launches by as much as 85% in the years since it was founded.

SpaceX has also flirted with offering human space travel -- most notably in the company's stated mission of bringing humans to Mars -- but it has also agreed to send a Japanese billionaire on a mission around the moon as soon as 2023.

For now, SpaceX is focused on the opportunity to launch satellites with its reusable heavy-lift rockets. The company has a significant head start over the competition in this regard and can monetize its technology with an already developed commercial market for satellite launches.

Blue Origin was founded in 2000 by Jeff Bezos and continues to be 100% funded by the internet tycoon. Bezos sells $1 billion of Amazon stock each year to keep the venture going, and with his $100+ billion wealth, funding is secured. Unlike its more focused peers, Blue Origin is going after both the space tourism and commercial satellite markets. 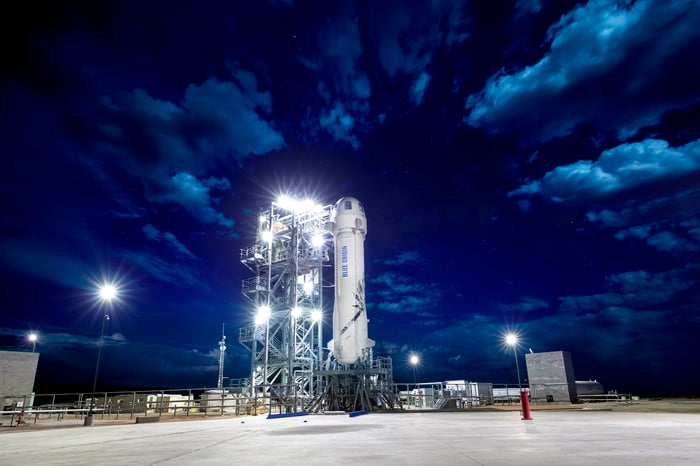 On the human travel and space tourism side, Blue Origin has developed a reusable rocket capable of shuttling six human passengers to space and back down to earth. The company's human transport vehicle was named "New Shepard" after Alan Shepard, the first American astronaut to go to space. This spacecraft has been successfully tested at least 10 times without humans and is expected to be tested with humans within the next year.

The company's space tourism business model will be similar to Virgin Galactic's, but the experience will be different. Blue Origin will submit travelers to an Apollo-like vertical take-off that will send them to the edge of space. Blue Origin's trip will last around 11 minutes and is expected to ask a similar ticket price as Virgin Galactic, although tickets have not yet been put on sale.

Blue Origin also has ambitions to compete with SpaceX on launching satellites into space with its New Glenn rocket, named after John Glenn, the first American to orbit the earth. The New Glenn is still in development but will be a reusable heavy-lift rocket. Blue Origin has signed several deals to launch future payloads for the U.S. government and satellite companies, including Telesat (owned by Loral Space & Communications), beginning in 2021.

Blue Origin is certainly a serious contender in the commercial space race, but it lacks the focus of Virgin Galactic and SpaceX. Although the company has traction in the markets for both space tourism and satellite launches, it is a few steps behind its rivals.

So, who is winning?

The three leading commercial space companies are all aiming for slightly different goals, so there is no clear overall winner in the space race so far.

Virgin Galactic will be the first of the three to hit the public markets in a listing expected by the end of 2019. The company is also expected to be the first to commercialize human space transport with space tours beginning in 2020. Perhaps these two firsts are "races" the company can claim victory in.

SpaceX has the largest valuation of the three companies and hasn't had any issue raising more capital in the private markets. The company has already successfully tested its reusable rocket technology, and it has started making commercial deliveries of space payloads such as satellites and scientific instruments for the government.

If there is a laggard, it is probably Blue Origin. The company is simultaneously tackling the human transport and commercial payload markets, but it is still developing and testing its offerings. However, Blue Origin isn't struggling by any means. The company has stable financing from Bezos and is far along in accomplishing its goals -- it's just not the market leader in any particular aspect.

One thing that is clear from studying the current crop of leading space companies is that the industry has a bright future. There is strong investor demand in both the private and public markets to fund these ventures, and the technologies being pioneered have promising applications with the potential of translating into big business.