Shares of CVS Health (NYSE:CVS) were jumping 5.9% higher as of 11:17 a.m. EDT on Wednesday. The nice gain came after the pharmacy services and health insurance giant reported its second-quarter earnings results before the market opened. 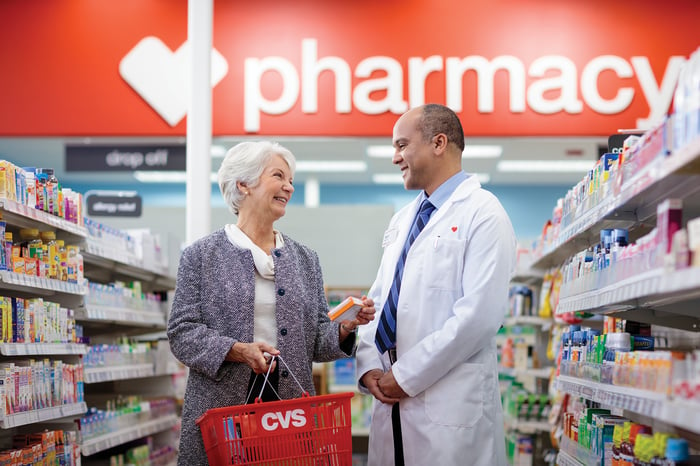 The main reason for the positive reaction to CVS Health's second-quarter results is that it beat expectations across the board. In May, the company projected that its Q2 adjusted EPS would come in between $1.68 and $1.72. The consensus Wall Street analysts' estimate was for Q2 revenue of $62.7 billion and adjusted EPS of $1.69.

There were several reasons for CVS Health's financial improvement. The biggest, by far, is the impact of its acquisition of Aetna late last year. Without this transaction, the company's revenue growth would have been well under 5%.

However, CVS Health received help in other areas as well. A shift in the Easter holiday from the first quarter in 2018 to the second quarter in 2019 boosted year-over-year comparisons for front-store sales. The company benefited from higher brand-name drug prices. It also reported increased pharmacy volume for its pharmacy benefits management (PBM) unit and its retail pharmacy business.

CVS Health is on track for a much better year than the company thought when it provided full-year 2019 guidance in February. Look for the Aetna integration to continue as a catalyst in the future. CVS Health expects significant synergies and hopes to introduce new product offerings that take advantage of its scope of operations as a large pharmacy retailer, PBM, and health insurer.