Please ensure Javascript is enabled for purposes of website accessibility
Log In Help Join The Motley Fool
Free Article Join Over 1 Million Premium Members And Get More In-Depth Stock Guidance and Research
By Dan Caplinger - Updated Aug 8, 2019 at 11:12AM

The wind-turbine blade manufacturer managed to turn things around after a tough stretch, but the future is less certain.

Renewable energy holds a lot of promise, and the companies that specialize in the equipment that goes into renewable energy production have a huge opportunity. TPI Composites (TPIC 4.70%) makes the composite blades for wind turbines, and demand for turbines has been high. Yet last quarter's poor performance shocked investors, and many feared that tougher times would persist well into the future.

Coming into Wednesday's second-quarter financial report, TPI Composites investors were prepared to see further losses amid sharply higher revenue. TPI's numbers were better than expected on the bottom line, yet despite that good news, changes in guidance suggest that the wind turbine business could be far from getting itself completely back into shape.

A stiff wind pushes TPI back into the black

Second-quarter results were generally favorable. Revenue for the blade maker jumped to $330.8 million, up by more than $100 million from the year-ago period. Net income of $1.83 million reversed a year-earlier $4.05 million loss, and earnings of $0.05 per share were quite a bit better than the loss of $0.26 per share that most investors were resigned to seeing from TPI. 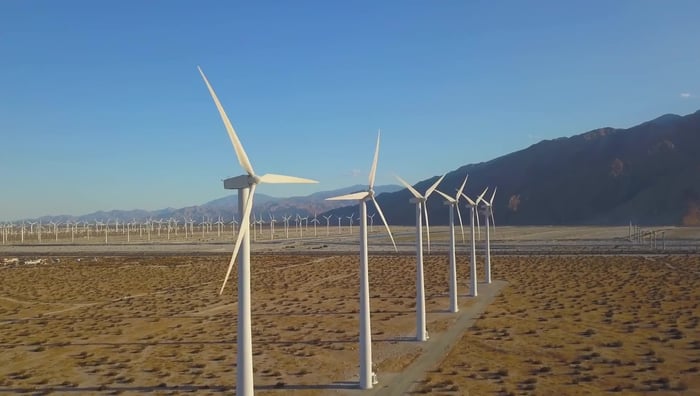 Most of TPI's key fundamental metrics saw gains during the quarter. Total billings were up 28% to $304.5 million. Total invoices for wind blade sets rose 24% to 716, adding almost 2.03 gigawatts of electrical generation capacity to its customer base. TPI added two new dedicated manufacturing lines during the period, bringing its total to 54, and total installed manufacturing lines climbed to 50, up 10 from a year ago. Of those, 30 lines are in operation, with 13 in start-up mode during a pre-production or ramp-up phase. Seven are in transition toward a new wind blade model.

However, TPI did see a little bad news. Manufacturing-line utilization fell two percentage points to 70% during the period. Moreover, currency impacts weighed on results, costing the company almost six percentage points of growth. The euro's weakness hit the company's operations in Turkey, while its Chinese facilities suffered from the rising dollar against the yuan.

From an efficiency standpoint, TPI made some progress. Overhead expenses were down 16% from year-ago levels, as lower incentive compensation and reduced performance assumptions led to reduced costs.

What's ahead for TPI Composites?

CEO Steve Lockard put the solid quarter into context. "During the quarter, we successfully mitigated challenges we encountered earlier this year in an efficient and cost-effective manner," Lockard said, "and we continue to grow our infrastructure, improve our operations, and strengthen our team and capabilities." In particular, he pointed to efforts to stabilize operating conditions at its facility in Matamoros, Mexico, as well as making a transition with a key supply partner as being useful for TPI Composites overall.

But not all of TPI's near-term guidance was positive. The company reiterated its past guidance for full-year revenue of $1.45 billion to $1.5 billion, but it cut its earnings expectations to a loss of $0.18 to $0.23 per share, worse by about $0.10 per share. Sets invoiced of 3,180 to 3,220 would be at the lower end of the previous guidance range. In addition, TPI seems to see weakness lasting through 2020, as it cut its revenue projections for next year by $100 million to a new range of $1.6 billion to $1.8 billion. Adjusted pre-tax operating earnings will be about $30 million lower, with expectations for between $140 million and $160 million.

Shareholders weren't very happy about anticipated headwinds, and the stock fell 5% in after-hours trading following the announcement. TPI should have the wind at its back over the long run, but at least for now, investors aren't likely to see as much strength in the wind blade maker's financials as they'd like.