There's a big story hidden in the dismal third-quarter numbers.

2018 is turning out to be a sad year for TPI Composites (TPIC 1.93%). Or at least that's what you'd deduce from the company's latest third-quarter numbers and its outlook for financial year 2018.

But the financial projections for 2019 and 2020 that TPI's management just outlined tells us the wind is blowing in the right direction for the company, as the adoption of renewable energy sources such as wind gathers steam.

Here's all you need to know about TPI's Q3 numbers and why you'd be better off looking beyond them if you're already invested or you plan to invest in the stock.

TPI's third quarter was no better than its second, as profit continued to slide on lower billings and decelerating sales. (The amount TPI invoiced during the quarter under its long-term supply agreements that will be later recognized as revenue) In-the-know investors, however, would know there's no reason to panic.

TPI sold fewer numbers of wind blades in Q3, as production declined nearly 19% year over year for three reasons: the transition of some manufacturing lines, the expiry of a couple of contracts late last year, and a delayed start-up. The first one is all you need to focus on.

A strong order flow means TPI is aggressively expanding its manufacturing capacity. At the same time, it's transitioning some facilities to new blade models that meet customer specifications. Wind-power companies generally provide design specifications to TPI as they strive to boost energy efficiency and costs. Facilities in start-up or transition phases typically use up more resources, such as labor and raw materials, over a smaller production base until they hit full capacity, which can dent sales and drive costs up. 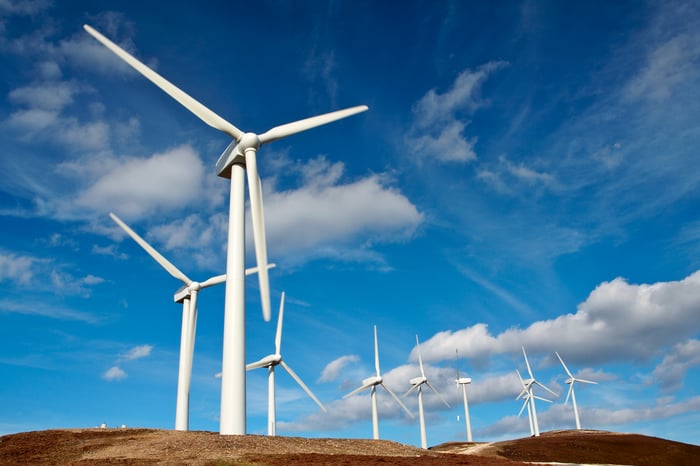 That, however, is only a blip, as all these investments TPI is making should pay off in the long run. So far this year, TPI has added net nine new manufacturing lines, taking its contract value to nearly $6.3 billion through 2023. Simply put, TPI can potentially generate that revenue over the next five years under its existing long-term supply agreements. Of that, a minimum volume commitment of roughly $4.3 billion ensures that much revenue for the company unless a contract is terminated.

To give you an idea what kind of growth that translates to, consider that TPI's contract value was only around $4.4 billion a year ago.

During TPI Composites' Q3 earnings conference call (here's the full call transcript), CEO Steven Lockard gave great insight into the global wind-energy market: "Global annual wind power capacity additions are expected to average nearly 67 gigawatts between 2017 and 2027, or 10-year CAGR of 8.2%, according to MAKE Consulting. This forecast also estimates that the top 20 emerging markets will grow at a CAGR of 26.5% between 2017 and 2027."

Lockard further explained how TPI plans to exploit those opportunities.

Our strategy is to continue to diversify our manufacturing footprint to take advantage of growth in both emerging and mature markets and leverage our low-cost hubs to not be too dependent on any one market. We believe we remain well positioned to execute this strategy and serve global demand from our facilities in the U.S., China, Mexico, and Turkey. We also expect to enter a new geography during 2019 to accommodate customer demand and to diversify our global footprint and supply chain even further.

It'll be interesting to see which new market TPI enters next year. A stronger global footprint should also help TPI smooth over the ongoing U.S.-China tariff war to some extent. For example, the company can flex its operations in Mexico to churn out more blades for a U.S.-based customer and send blades manufactured in China elsewhere instead.

TPI's revenue visibility has enabled management to set out financial targets for the next year but beyond.

Those are really encouraging projections, and management is confident that TPI can grow its sales more than twofold by 2021. So if TPI's weak Q3 numbers disappointed you, remember to look at the bigger picture the next time you sit down to analyze a company and its stock.