Due to a shift in Cedar Fair's fiscal calendar, there were 64 additional operating days in the second quarter of 2019 compared to the prior-year period. This beneficially impacted the company's results. That said, Cedar Fair demonstrated some solid operational improvements.

The amusement park operator's revenue rose 15% year over year to $436 million, due in part to a 10% increase in operating days in the period. Higher attendance, in-park per-capita spending, and out-of-park revenue contributed to the gains. The company put in-park per-capita spending in the quarter at $47.22, up $1.82 over the year-ago period, and out-of-park revenue around $49 million.

On a comparable operating calendar basis, Cedar Fair's net revenue grew 3%, fueled by a 4% increase in both in-park per-capita spending and out-of-park revenue.

"Our commitment to broaden the guest experience and invest in more immersive attractions is successfully expanding our audience and improving the value perception of our parks," CEO Richard Zimmerman said in a press release. 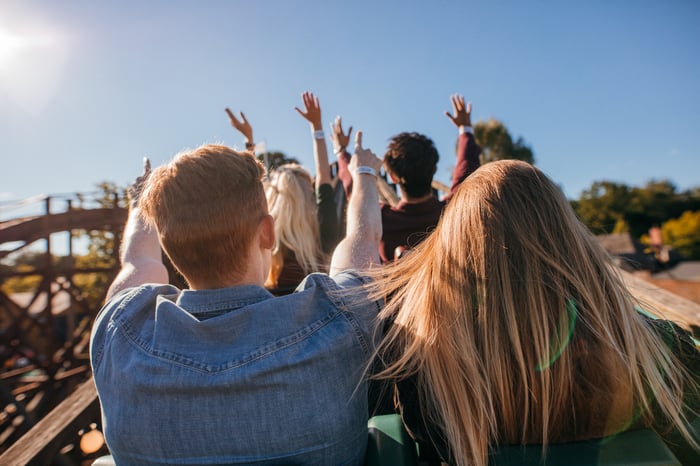 Operating income surged 50% to $102 million, as the 15% increase in revenue more than offset an 8% jump in operating costs and expenses. The growth in costs and expenses was mostly due to additional operating days, as well as higher labor costs driven by wage-rate increases and staffing for new events.

Zimmerman also said that Cedar Fair is pleased with the early performance of the Schlitterbahn parks, which the company expects will help to strengthen its portfolio of regional amusement park assets and cash-generating ability.

"We feel very good about how the year is tracking as we move into the month of August, followed by the increasingly important and very popular Halloween and winter holiday events," Zimmerman said. "The strength of our core business, combined with the positive early returns we are seeing from the two recently acquired Schlitterbahn water parks, makes us confident that everything is in place this year for a strong finish."