Please ensure Javascript is enabled for purposes of website accessibility
Log In Help Join The Motley Fool
Free Article Join Over 1 Million Premium Members And Get More In-Depth Stock Guidance and Research
By Billy Duberstein - Jul 3, 2019 at 8:20AM

Cedar Fair is looking to grow in Texas.

Compared with many high-yield real estate investment trusts in the market, Cedar Fair (FUN 6.87%) has had a rather underwhelming 2019. Although the REIT sector has surged this year, Cedar Fair has been left behind. The stock is roughly flat for the year and is down 25% over the past 12 months. 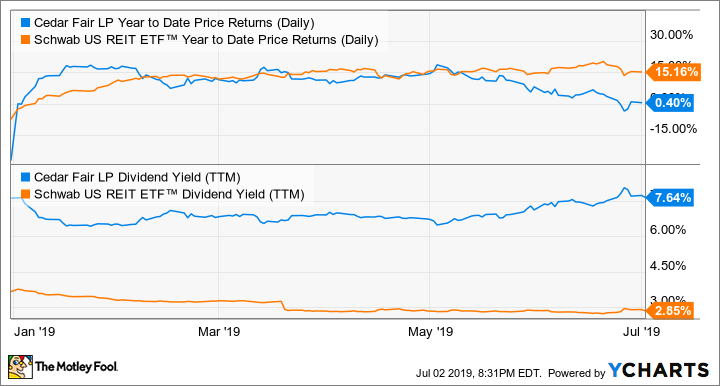 Nevertheless, Cedar Fair has a few things going for it. As the owner of 12 theme parks and manager of another, along with several hotels and 600 luxury RV sites on or near its properties, the company has a pretty solid economic moat.

Cedar Fair's theme parks are generally in locations away from large city centers, where its facilities are go-to destinations for the local population. It's also an "experience" stock unlikely to be disrupted by technology. In fact, management anticipates that 2019 will mark the 10th consecutive year of revenue growth. By the way, the yield on Cedar Fair's annual shareholder distribution to unit holders is nearly 8%.

Typically, Cedar Fair grows by adding new rides, new food and beverages, and new features such as season passes to its existing facilities. However, the company just made two rather sizable acquisitions, which will extend the company's reach into Texas, a new geography for the company. 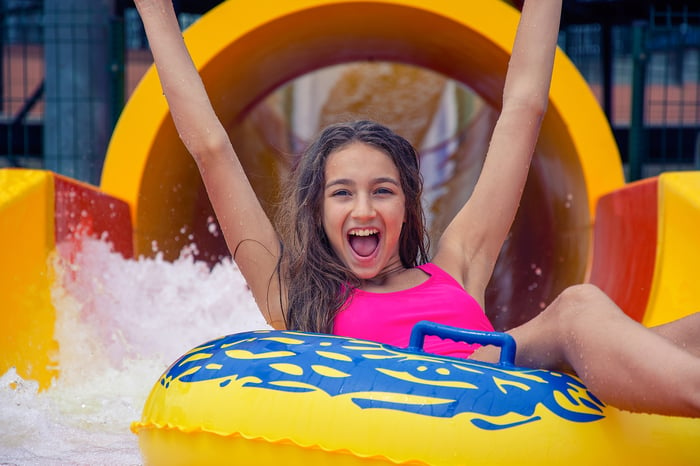 Cedar Fair is purchasing two large water parks in Texas under the Schlitterbahn brand: one in New Braunfels, and another in Galveston. The total acquisition will be $261 million in cash, with the option to buy another 40-acre property owned by Schlitterbahn in Kansas City, Kansas, for $6 million. The transaction will expand Cedar Fair's total park count to 15.

Cedar Fair management has described Schlitterbahn as "iconic," and it's easy to see why. The New Braunfels Schlitterbahn park just celebrated its 40th anniversary  and Amusement Today, an amusement park authority, has named it "Best Water Park in the World" for 21 straight years. The indoor Galveston Park is no slouch, either, having been named "Best Indoor Water Park in the World" for the past 10 years.

The Schlitterbahn parks brought in 1.2 million guests and generated revenue of $68 million in 2018. That compares with Cedar Fair's 25.9 million guests and $1.35 billion in 2018 revenue. Cedar Fair's adjusted EBITDA margin was also 35% last year, and while the company didn't disclose Schlitterbahn's profitability, it did say this: "Cedar Fair expects the two Texas locations to achieve an adjusted EBITDA margin in line with Cedar Fair's standalone results as management implements a number of growth and operational initiatives at the parks over the next two years, reflecting an accretive EBITDA multiple post-synergies."

So it sounds as though Schlitterbahn may not currently be as profitable as Cedar Fair, but Cedar Fair appears to think it can leverage operational expertise to boost margin at Schlitterbahn. Then, when figuring the cost synergies of bringing the assets underneath Cedar Fair's company, the transactions could become margin-accretive.

Cedar Fair does have a fairly good track record of improving its margin over the long term, though these improvements don't occur within a straight line: 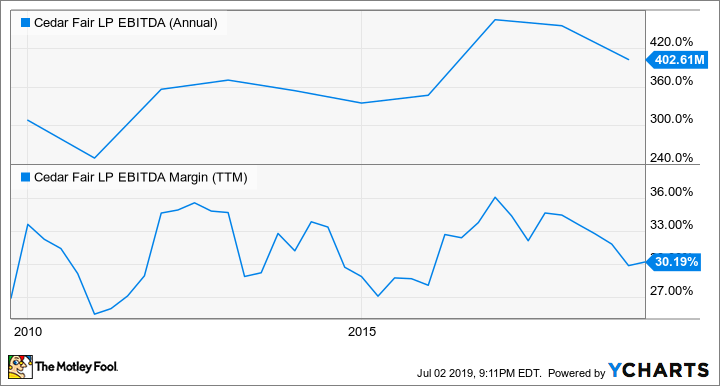 To fund the acquisition, Cedar Fair issued $500 million of 10-year 5.25% senior unsecured notes. That's obviously more than the $261 million required to buy Schlitterbahn. Another $150 million will go toward buying the land underneath its California Great America Park. Buying that land will negate the need for lease payments -- which, since it's California, is probably skyrocketing -- and give Cedar Fair greater control of the location.

In all, Cedar Fair has shown operational excellence and discipline over the course of its corporate life. While any large acquisition has some risk involved, it's probably a good bet that management will be able to integrate these assets effectively into the Cedar Fair family.

In the first quarter of 2019, management noted that deferred revenue was up 12% for the first four months of the year, meaning the number of people signing up for season passes is up by double digits compared with last year at this time. Many of the company's parks in the Midwest and Canada are closed in the winter, but if advance ticket purchases are any indication, Cedar Fair should have a strong 2019. If the Schlitterbahn acquisition synergies are achieved, the company could have a much better year than the market apparently thinks.