Shares of Goodyear Tire & Rubber Co. (NASDAQ:GT) dropped 10.3% in July, according to data provided by S&P Global Market Intelligence, after the company reported second-quarter results that were down year over year and short of analyst expectations. The miss continued a difficult year for the tire maker, which is operating in what management describes as a "challenging" environment.

Goodyear shares were basically flat on the month heading into its July 26 earnings report but fell sharply after the company said it had earned $0.25 per share in the second quarter on revenue of $3.6 billion. This was short of analyst expectations for $0.34 per share in earnings on $3.78 billion in sales. 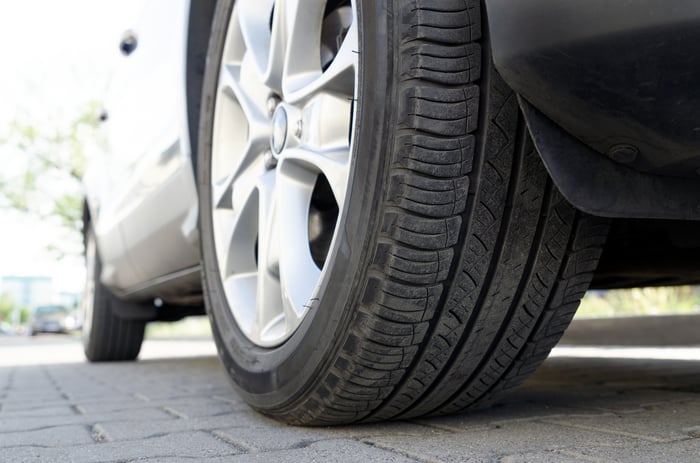 So far, 2019 has not been a good year for Goodyear. The company in the first six months of 2019 has generated sales of $7.2 billion, down 6% year over year, due to unfavorable foreign currency conversion and lower volumes. Tire unit volumes totaled 75.4 million, down 3% from 2018. Original equipment volume is down 9%, while replacement tire shipments are down 1%.

The company has come under pressure due to the ongoing threats of trade wars against Mexico and China, persistent fears of an automotive slowdown, and concerns about the health of the U.S. consumer. During the post-earnings conference call, Goodyear CEO Richard J. Kramer conceded that the company is operating in a "challenging macroeconomic environment for the industry."

With July's drop, shares of Goodyear have now lost 38% of their value so far in 2019 and are down 50% over the past year. On the call, Kramer said that the company is working on a "significant restructuring plan" for the U.S., although he's not yet ready to provide details.

In March, Goodyear announced a streamlining of its German factories that it says will add $60 million to $70 million annually to earnings once it's completed in 2022. Kramer said the U.S. actions, which will address the company's "low-value, high-cost capacity," should generate savings "at least as high" as Germany and on a similar timetable.

Goodyear is trading at just 6.5 times earnings and perhaps doesn't have much further to fall. But the combination of continued macro pressures, the threat of trade wars, and a vague restructuring plan that's a few years away from completion has given investors few good reasons to jump in at these levels.