Convenience can sometimes come at a big cost. While consumers, especially Apple (NASDAQ:AAPL) fans, love to flock to the latest and greatest technologies, there are times when maybe that might not be the best approach. A good example is the in-screen fingerprint reader that Apple has been working on. Fingerprint scanning itself isn't new, as iPhones first featured it way back in 2013. And neither are in-screen fingerprint readers, as many Android devices feature them already. However, they aren't terribly good.

The problem is that, as companies shift more toward biometric data, especially Apple, which is a leader in the industry, it could spell bad news for both consumers and businesses.

Why it's bad for consumers

As companies gravitate away from pin codes and more toward face IDs and fingerprint readers to unlock their devices, users give more and more of their information away to be stored on a phone. It's dangerous because now these tech companies have even more information than ever before -- sensitive information that if compromised or mismanaged could put users' privacy at risk. 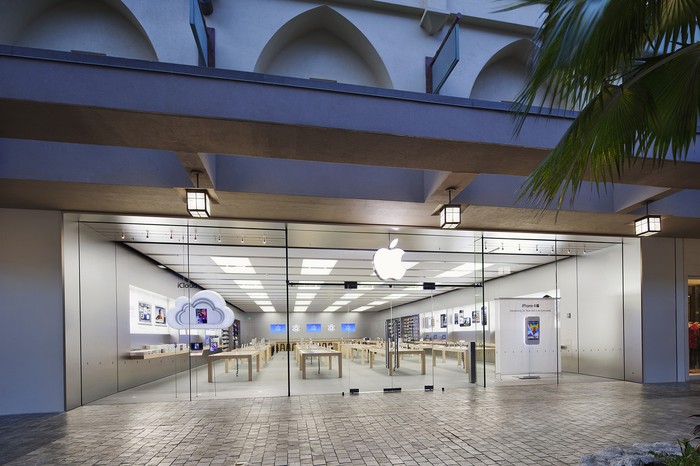 Unlike simply resetting or changing a password, users do not have the same recourse if their biometrical information is compromised. The potential for identity theft could be heightened as a result of these types of breaches, and in 2018, losses totaled $1.48 billion due to identity theft.

Even if there hasn't been a breach, requests for data from law enforcement could also make that information available to the police. And although Apple may be committed to protecting user privacy, that doesn't mean that all companies are of the same mindset.

Why it's bad for businesses

From a business standpoint, biometrical data also creates a bigger liability issue. While Facebook (NASDAQ:FB) may be facing issues related to protecting data, there's more safeguarding that would need to be in place to protect biometrics given the vulnerability of such information. Forbes recently reported on a case where there has already been a breach that has impacted millions of users and that included biometrical data being compromised. (This breach included both fingerprint and facial recognition.) While the long-term consequences of that are unknown, the problem for users is obvious: Biometric data can't be changed and will remain linked to them forever, barring some significant changes to their physical appearance.

As biometrics play a larger role in the tech industry, there will also be more ways for it to impact users' day-to-day lives, especially if we see apps start to go down this route, too, and if passwords become obsolete. That's only going to make that information much more vital to protect.

Legal experts note that many states do not have regulations protecting biometric data, but that's starting to change, and that means companies should be proactive in ensuring that their policies and procedures are airtight to ensure data is well protected.

Why does this matter to investors?

By focusing on novelty features like fingerprint scanning, Apple is exposing itself to more liability. With nearly $60 billion in profits for fiscal 2018, the company certainly has ample room to handle the added costs and controls. However, cost isn't the only consideration, as from an investor's standpoint, it's questionable how much value this adds to a product compared to the potential costs and liabilities that could come from it.

For now, consumers may not think twice about giving Apple their biometrical data, but as more breaches happen and as we start to see the consequences realized from them, it could scare people away from devices that use biometric data. While that day might not come anytime soon, if it does, it could be damaging for a company that's already had trouble with iPhone sales.