Please ensure Javascript is enabled for purposes of website accessibility
Log In Help Join The Motley Fool
Free Article Join Over 1 Million Premium Members And Get More In-Depth Stock Guidance and Research
By Daniel Miller - Oct 26, 2019 at 8:00AM

Here are three crucial investor takeaways beyond the headline numbers.

To sum up the past five or so years for Ford (F 0.86%) using an old saying: The automaker can't win for losing. Years ago as Ford was rolling and generating record annual profits, the stock's valuation never benefited, as Wall Street could only focus on plateauing auto sales around the corner. Such is life for a cyclical industry. That old saying holds true for Ford's third quarter: Despite the business beating top- and bottom-line estimates, its stock declined. Let's dig into highlights from Ford's third quarter, why the share price slipped, and some important takeaways investors need to be aware of.

Despite these beats, Ford's stock declined in the following trading session as investors and analysts focused on the company's lowered full-year guidance. Ford cut its 2019 EBIT guidance to a range between $6.5 billion and $7 billion, down from the prior range of $7 billion to $7.5 billion. Ford's lowered profit guidance was due to a number of factors: higher warranty costs, elevated incentive spending, weak results in China, and declining EBIT margins in North America.

There were bright spots in Ford's third quarter, and there were certainly some red flags. Let's dig into three key takeaways and why they're important for investors. 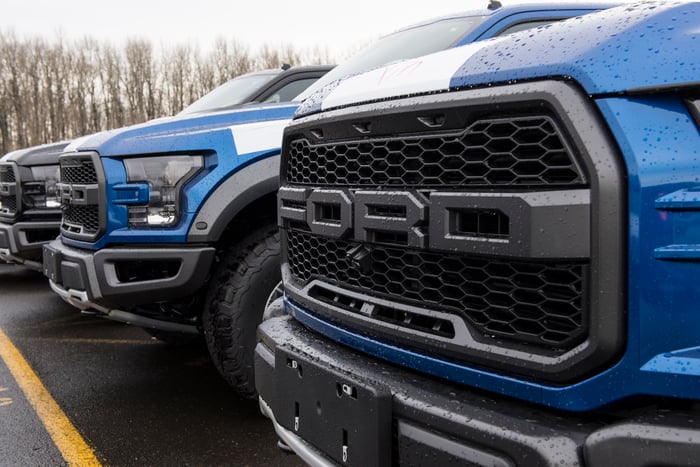 You may or may not recall Moody's Investors Service cutting Ford's credit rating to junk level a little over a month ago. The downgrade to Ba1, just below investment-grade level, sent Ford's stock about 3% lower. Moody's cited cash flow concerns, profit margins, and its looming restructuring as the main reasons. Long story short, this downgrade makes borrowing more expensive for Ford, and it prevents some pension funds from being able to buy Ford bonds.

Why does this matter, you ask? Because the automaker's third-quarter decline in North America EBIT margins and lowered profit guidance could be the last straw for S&P Global Ratings and/or Fitch Ratings to follow Moody's and cut Ford's rating into junk status. Now, if these potential rate cuts do happen, it isn't the end of the world for investors, but it will cost Ford more to finance its debt and will be one more aspect working against its restructuring and overall turnaround.

Anyone that knows the automotive industry, at least from an investing standpoint, knows incentives as a naughty word. Rising incentives are bad news because they essentially mean it's less profitable to sell vehicles, which can lead to a vicious cycle if other competitors boost their spending to compete. Nobody wins when the auto industry enters an incentive war; it only erodes profit margins.

Investors shouldn't panic yet, for a few reasons. One reason: Per Edmunds data, Ford still has the highest average transaction prices among Detroit automakers during the third quarter. Further, Ford is replacing 75% of its North America product lineup by volume by the end of 2020, and new products require far fewer incentives to sell. Essentially, while third-quarter incentives weren't ideal, there's no reason to sound the alarm -- for now.

The last important takeaway for investors is that Ford has much work to do overseas, especially in China. While Ford's North America market shined and generated more than $2 billion in pre-tax profits, not a single overseas market was profitable. In fact, South America, Europe, Middle East and Africa, China, and Asia Pacific combined for a $683 million loss during the third quarter.

China was the roughest of overseas segments, with a pre-tax loss of $281 million and a 27% decline in revenues. It's likely that Ford's sales in China will dip below 600,000 units for 2019, which is a level Ford hasn't recorded since 2012 and a far cry from its 1.2-million-unit peak in 2016. The silver lining for investors, if you can call it that, is that despite the sales and revenue decline, management was able to cut costs and improve operations enough that it actually narrowed its pre-tax loss by 26% compared to the prior year.

Ford managed to top analysts' estimates during the third quarter, but as I've mentioned, the company faces many concerns. Those concerns, including overseas woes, incentive spending, and potential downgrades, combined with a lowered full-year guidance, were enough to send the stock lower.

Ford certainly faces challenges as the company embarks on a massive restructuring mission, but it still has a lucrative North America profit engine and a very profitable Ford Credit financing arm, and it is making the right moves to focus on more-profitable products. Stay tuned. Investing in car stocks isn't easy, but this ride is far from over.