The launch of the Tesla (NASDAQ:TSLA) Cybertruck a few weeks ago earned Elon Musk and his industry-shaking energy company plenty of media attention. And aside from an embarrassing gaffe involving its supposedly unbreakable windows, the new vehicle has enjoyed quite a reception, with more than 200,000 pre-orders already in place. 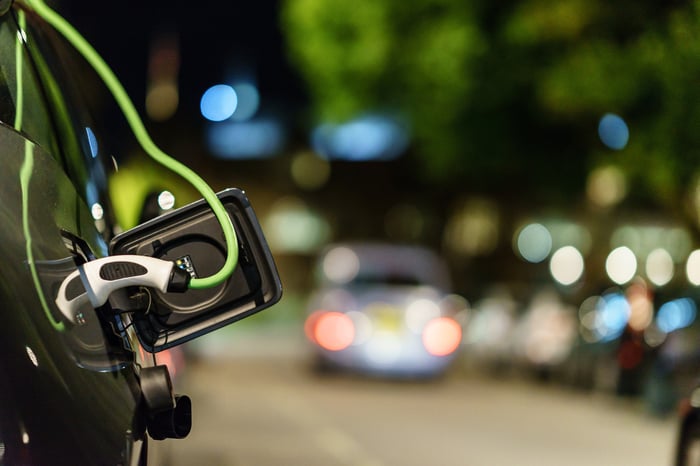 There's no doubt that Musk's eccentric style, as well as never-before-seen products like the Cybertruck, have helped to make Tesla the most recognizable electric-car maker in the industry. Outside of the United States, however, there are many companies that are quietly setting themselves up to compete with, and perhaps even to surpass, the quirky entrepreneur at his own game. Here are three of our favorites.

"Tesla" and "China" have been big buzzwords for years, associated as they both are with potentially world-changing innovation and growth. So when a Shanghai-based automotive start-up comes along amid whispers of being "China's Tesla," you know it's worth your attention.

Founded back in 2014, Nio (NYSE:NIO) manufactures premium electric vehicles for the international market. While its products have generally been met with critical acclaim, the company has also developed a reputation for being risky and unpredictable. For one thing, the company had a bad start to the year, with mass layoffs and the cancellation of a proposed factory. Some commentators fear that its valuation is based on a vague notion of "potential," rather than its current financial performance -- although perhaps a similar charge could be made against Tesla itself.

On the other hand, the stock has been looking a little more attractive lately. In the fiscal quarter ending in October, Nio delivered almost 5,000 vehicles, representing a 35% sales surge, while last month it saw its share price jump following the announcement of a partnership to develop autonomous cars with technology giant Intel. Nio is definitely a high-risk bet, but the company's commitment to pushing boundaries, combined with its exceptionally low price, makes it simply too hard to write off.

Based out of the economic powerhouse of Shenzhen, BYD Company (OTC:BYDD.F) is one of the world's fastest-growing auto companies, and now may be the perfect time to get familiar with it. From the unusual name (an acronym for "Build Your Dreams") to its unique headquarters (a 670-acre campus complete with schools, hotels, and a monorail system), the company exudes the sort of confidence associated with the early days of Silicon Valley.

Little-known internationally, BYD is already a giant in China, its huge array of products touching on almost every high-tech sector from consumer electronics to energy storage. In fact, the company is already the world's largest producer of battery-powered vehicles.

Though the company has made little impact outside of China and has yet to show any real global ambition, this doesn't mean there isn't still room for phenomenal growth. Electric cars only account for 2% of total car sales in China, partly because the country is poorly equipped with electric charging points. Even if it never ventures beyond its own borders, the future looks exciting for BYD.

When Elon Musk announced this year that the next Gigafactory would be located on the outskirts of Berlin, all attention turned to the German auto industry -- and its relative failure to produce anything as exciting as its American counterpart.

One of the industry giants that has long been promising to change this is The Volkswagen Group (OTC:VWAGY). In November, the company made good on its word by starting production of a new electric vehicle dubbed the ID.3. In what it calls its "electric offensive," Volkswagen also aims to dedicate tens of billions of euros by 2028 in order to launch as many as 70 new electric models.

One of the world's largest companies, the 82-year-old Volkswagen has survived countless cycles of boom-and-bust -- not to mention dictatorship, war, and the division and reunification of its host country -- making it particularly adept to achieving long-term aims such as this one.