But while management lauded the company's performance as "solid," shares of the leader in adhesive-dispensing systems fell around 3% as the market absorbed the implications of continued macroeconomic and trade uncertainty.

Let's look at how Nordson ended its fiscal year, starting with how its quarterly headline numbers fared on a year-over-year basis. 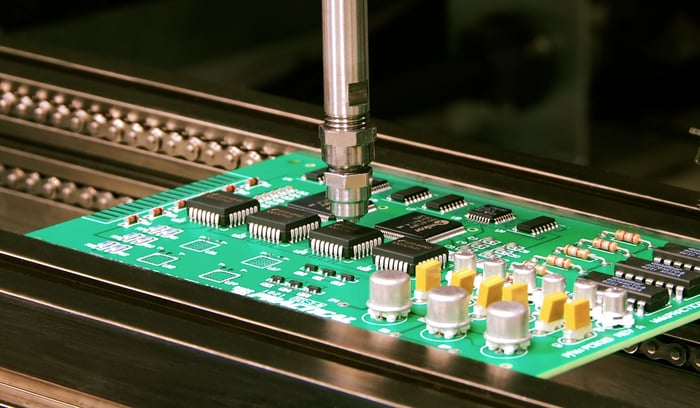 A Nordson adhesive dispenser working on a semiconductor board. Image source: Nordson.

Keep in mind that the GAAP earnings above include the impact of one-time items like restructuring costs and discrete tax adjustments. Excluding those items, Nordson's non-GAAP earnings climbed 24.3% year over year to $1.79 per share. By comparison, most Wall Street analysts were modeling slightly lower adjusted earnings of $1.78 per share, but on higher revenue of $598 million.

As measured by segment:

On a consolidated basis, however, Nordson's backlog at the end of October was $385 million, down 1% year over year and falling from $431 million three months earlier.

At the same time, the company also achieved enviable improvements in operating margin for each segment, including 31% from adhesive dispensing (up 350 basis points year over year), 22% at advanced technology systems (expanding 150 basis points), and 25% from industrial coating systems (up 425 basis points). Adjusted EBITDA grew 15% to $140 million, or 24% of total sales.

"The macroeconomic environment remains challenging, with uncertainty impacting customers' investment decisions," CEO Sundaram Nagarajan said. "Our ability to drive full-year organic growth in most product lines demonstrates the resiliency of our end markets and value we deliver to our customers."

On that light guidance, sources of Nordson's strength

But Nagarajan also admitted the company has opted to take "a conservative approach" to its outlook, particularly given a persistent lack of growth in orders for advanced technology systems serving the electronics end market.

As such, Nordson is targeting full fiscal-year 2020 organic sales growth of approximately 1% to 3%, with a modest 20-basis-point contribution from acquisitions, and a foreign currency headwind of about 30 points (assuming exchange rates remain roughly steady). It also suggested operating margin and EBITDA margin should remain somewhat steady from fiscal 2019 (at roughly 22% and 27%, respectively). On the bottom line, the company expects this should translate to around a 2% to 6% increase in GAAP earnings per share.

"The diversity of our end markets and geographies, as well as our ability to execute on our growth initiatives, while providing superior service to our customers, continue to be key drivers of our success," Nagarajan said.

Nonetheless, considering most analysts were anticipating more-robust fiscal 2020 revenue and earnings growth of 3.4% and 10%, respectively, it should come as no surprise to see Nordson stock pulling back today.