When it comes to corporate household names, McDonald's (NYSE:MCD) and PepsiCo (NASDAQ:PEP) are two of the biggest -- and let's be frank, more controversial. The burger chain has routinely been knocked for the unhealthy nature of many of its signature offerings. The planet's undisputed silver medalist in soft drinks is likewise pushing a namesake product blasted for its health ramifications. Yet the companies are holding up better than you might think.

On the positive side, PepsiCo is expected to cap off 2019 with its headiest revenue growth since 2011. McDonald's share price set an all-time high this summer. However, it doesn't take much effort to reframe those accomplishments in ways that show matters as less than idyllic. PepsiCo is targeting just 4% in organic top-line growth this year, even if it will be the first time since 2011 that PepsiCo manages to grow its business better than 2%. McDonald's shares have fallen 11% from their summertime peak, even as the general market moved higher. But for those looking to invest today, which stock comes out ahead? 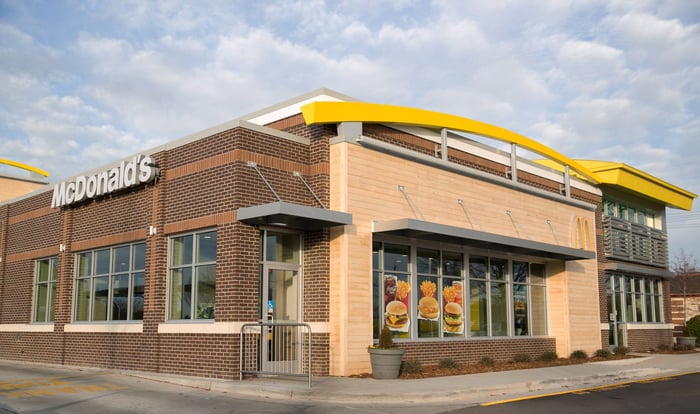 PepsiCo has been marching in place since 2011. After sluggish years of sub-2% revenue growth -- including three years of actual declines  -- its annual revenue is clocking in just shy of the $66.5 billion it recorded in 2011.

It has managed a healthier growth cadence lately, relatively speaking. Revenue rose 3.1% through the first nine months of the year, with a 4.3% year-over-year uptick in PepsiCo's latest quarter. Sales volumes for sugary carbonated beverages have been shrinking for the last few years, but the market's growing taste for flavored sparkling water has helped offset some of the sting. PepsiCo's extended reach into other aisles of the grocery store with its Frito-Lay salty snacks and Quaker oatmeal divisions also provides it with valuable diversification.

The path down the company's income statement is often complicated given the global variables and product-line shuffles, but pretax profits rest slightly above their 2011 level. Despite the nuances, income investors have been treated to growing payouts. When PepsiCo boosted its quarterly distribution in July, it extended its string of dividend hikes to 47 consecutive years.

Among Dividend Aristocrats, McDonald's is no slouch either. Its latest dividend hike pushed its streak to 43 straight years of increasing payouts. But -- again like PepsiCo -- its top-line results in recent years have been unimpressive. Revenue has fallen every year since it peaked in 2013 -- but there's a method to the company's madness.

McDonald's has been handing off company-owned locations to franchisees, a move that trades revenue for lower royalties and franchise fees. Its margins are rising, but pretax profits are holding steady given the shrinking revenues. The upside here is that the refranchising push passes on more of the risk to third parties.

Neither company's growth will wow you, though analysts see a return to top-line gains for McDonald's next year and PepsiCo delivering its healthiest revenue uptick since 2011. Dividend yields -- with PepsiCo at 2.8% and McDonald's at 2.5% -- are predictably steady.

But for the better investment now, I'm still going to go with McDonald's here, largely because it has the clearest near-term catalysts that could power its gains. The fast-food giant has been at the forefront when it comes to taking advantage of third-party delivery apps. The ability to shift the costs of operating a delivery fulfillment system onto those upstarts has given it easy access to the most convenience-seeking customers.

With both companies' numbers starting to move in the right direction, you could probably win by investing in either, but McDonald's appears to be the better bet to beat the market in 2020.