The automaker's stock price has been sagging for years and brand loyalty is down, but Jim Hackett has some ideas.

Although it's able to consistently boast the title of America's best-selling automotive brand, Ford Motor Company (NYSE:F) has been having a rough few years. The automaker's former CEO, Mark Fields, was ousted in 2017, at least partially due to a downward trend in the company's stock price since he took the reins in 2014.

Fields was replaced by Ford Smart Mobility boss Jim Hackett, whose leadership hasn't reversed the ugly trend of Ford's stock price. However, according to a recent interview with Automotive News (subscription required), Hackett has a plan to finally right the ship. 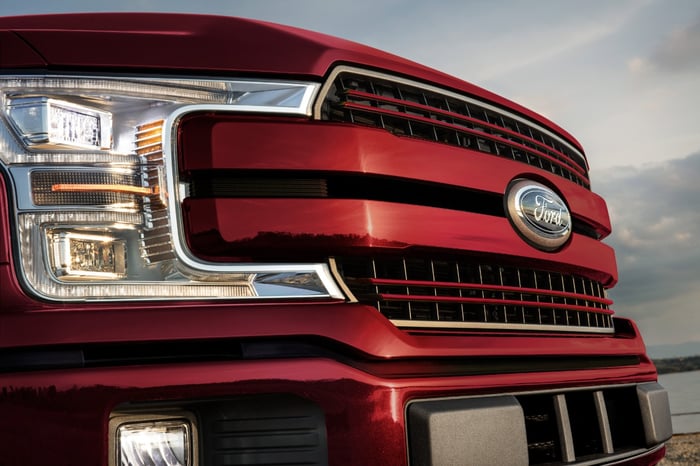 "I see a dramatic improvement in the business," Hackett told Automotive News at Ford's headquarters in late November. "When I came in, it was my observation that it had been frozen a little bit, like caught in amber. Everything that was great about it was frozen. ... Ford needed to break the amber and start to transform."

We're not sure the "caught in amber" analogy quite works, but Hackett sure sounds optimistic about Ford's near future. Let's take a look at what there is for the Blue Oval to be optimistic about.

A lot riding on the Mustang Mach-E

One thing that Hackett understandably wanted to talk about in this interview was the Mustang Mach-E, the all-new electric Mustang SUV that was just unveiled at the Los Angeles Auto Show in November. While its name is controversial with brand purists (there's a Change.org petition to change the name), this new crossover has gotten a ton of attention and is already succeeding in acquiring conquest sales from drivers who are new to Ford and new to electric vehicles.

"We're hopeful the Mach-E is an exemplary story of the way we're trying to change Ford," Hackett told Automotive News. "It's an incredible turnaround in speed and quality and innovation, which is what we talked about 30 months ago that we want to bring to the company." If the Mach-E flops, then Hackett could face the same fate as Fields. But if it's as much of a hit as it's already shaping up to be shortly after its unveiling, then it will give Hackett the redemption that never quite surfaced for his predecessor.

The Ram 1500 and the Chevrolet Silverado 1500 are both all-new for 2019, so what is Ford's plan to keep up with the increasingly tough competition?

"The fitness of the kind of competition that comes at us gets better and better," Hackett admitted in the interview. "We can't stand on our laurels here, and we're not." That's good, because resting on one's laurels is something that tends to happen with automakers in the pickup truck business. Outside of general advancements in engineering making the vehicles more capable, there really haven't been a lot of major changes to the American pickup truck in decades. Hackett continued:

We take the advantages of [aluminum], and we now start to marry the intelligence -- the emergence of the connectivity, the awareness of how people use the vehicles. The intensity of understanding what people do in our F-150s has probably never been higher. We have to keep changing the product for them in ways that they care about.

What Hackett is talking about is a bit delicate, because brand loyalty is a big factor in the pickup truck game. However, a recent survey by CarGurus revealed that Ford truck drivers are the second-least brand-loyal, with only 27% of them unwilling to consider another brand, so Ford can't count on loyalty.

If it changes the F-150 too much, it risks losing the brand loyalists it still has. If the F-150 doesn't change enough, the truck could fall behind the competition and lose relevance. Crafting the next generation of the wildly popular truck will take a great deal of care in striking a balance between familiarity for the Ford truck loyalists and adding new features and technology to keep it modern.

What the future has in store

Jim Hackett is handling the near future of Ford like his job depends on it, which it likely does. If the Mustang Mach-E launch goes smoothly and if the next-generation F-150 is the hit that it needs to be, then it's hard to imagine Ford being in a bad place a couple of years from now. However, investors and Ford's board of directors could get impatient waiting for that turnaround to happen, which would be bad news for the optimistic CEO.

The good news for investors is that Ford's stock could be getting ready to grow: Its price-to-earnings (P/E) ratio (stock price divided by earnings per share) as of this writing is 23, and has been climbing since the beginning of 2019 after being mostly flat since 2016. A stock's P/E ratio has a growth estimate built into it, and a rising P/E ratio can be an indicator that the stock price is getting ready to grow as well.

That said, when a company is well-established like Ford (and well over a century old, in this case), a relatively high P/E ratio could be a sign that the stock is overvalued, so there's still some risk involved. While P/E ratio shouldn't be your sole basis for picking a stock, it's a sign in this case that Ford stock could be poised to grow, making it a potentially good buy in 2019. If you have a good feeling about future Ford trucks and EVs, it could be a good time to buy and hold.