It's weird to think that the following two things are true: The world is dominated by massive corporations with immense scale and wide reach and the lifespan of massive companies has never been shorter. In fact, in 1965 the average lifespan of companies on the S&P 500 was 33 years, but it plunged to 20 years by 1990, and is expected to drop to a modest 14 years by 2026. The simple truth is that adapting is difficult, and the world will leave companies behind in the blink of an eye. Finding phenomenal stocks that you can buy and hold forever is increasingly difficult, which is why investors should consider these three juggernauts.

Amazon's surge onto the retail scene has been one of the more incredible business developments in history: it completely changed how the world buys products. Amazon has single-handedly caused many retail stores and chains to close their doors forever, but Walmart (NYSE:WMT) has proven capable of adapting to the new retail landscape and should remain a stock investors can comfortably buy and hold forever.

Once Amazon shook up the retail industry with its e-commerce prowess, Walmart knew it needed to move to an omni-channel retail strategy and bolster its e-commerce business. In a big move, Walmart snapped up Jet.com in 2016 for $3.3 billion. Many investors won't recognize Jet.com, and that's how Walmart wanted it: It didn't want the company for the brand, it primarily wanted Jet.com founder Marc Lore, and the company's technology and expertise.

Since the acquisition of Jet.com, Walmart has consistently improved its online business through buy online and pickup in-store, same-day grocery delivery, buy online and return in-store, and overall efficiency, among other factors. In fact, during the third quarter, digital sales rose 41%. U.S. comparable-store sales jumped 6.6%, which drove overall sales up 3.3% -- great growth for the world's largest brick-and-mortar retailer. 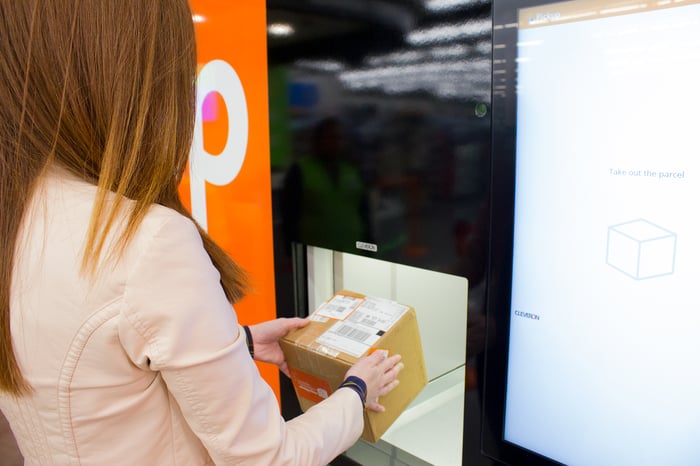 While Walmart's e-commerce growth is a huge part of investors' bullish thesis, the legendary retailer can't neglect the massive scale and brick-and-mortar network that helped shield it from Amazon's retail surge. What many investors overlook is that Walmart is already completely remodeling 500 stores annually, out of roughly 4,800 stores, in addition to thousands of special store projects. What's even more intriguing is how Walmart is evolving and considering new revenue streams, such as providing 5G antennas on its network of store roofs, on which other companies could rent space to build their network infrastructure. Management is even considering allowing third parties to sell through its e-commerce website using its logistics, warehouses, and delivery network. It's this outside-of-the-box thinking that should intrigue investors and reassure them that Walmart has the forward thinking process to be one of the few retailers that can challenge Amazon and thrive long-term.

If you're looking for companies that you trust to evolve and adapt over time, it sure helps you sleep at night if you choose a company that has already proven it can do so. Procter & Gamble (NYSE:PG) is a shining example of how to adapt to the changing retail landscape and reignite growth.

Surprisingly, for a company known for having a staggering 21 brands that generate over $1 billion in annual sales -- and 11 more that are well on their way to that mark and generating over $500 million annually -- P&G's evolution was seemingly counter-intuitive: less is more. That's right, P&G's strategy to reignite growth that had stagnated for years was to axe roughly 100 brands and double down on 65 stellar brands with renewed marketing, focus, and investment strategies.

P&G's renewed focus on its best brands helped drive organic sales 7% higher during the first-quarter fiscal 2020, with all 10 of the company's global categories increasing. The result was significant enough for management to quickly bump up its full-year revenue and earnings guidance. The recent quarter wasn't a one-hit wonder. You can see toward the end of the chart below that investors have consistently bought into the new strategy and driven the stock up roughly 73% since May 1, 2018, as the company's turnaround gained traction. 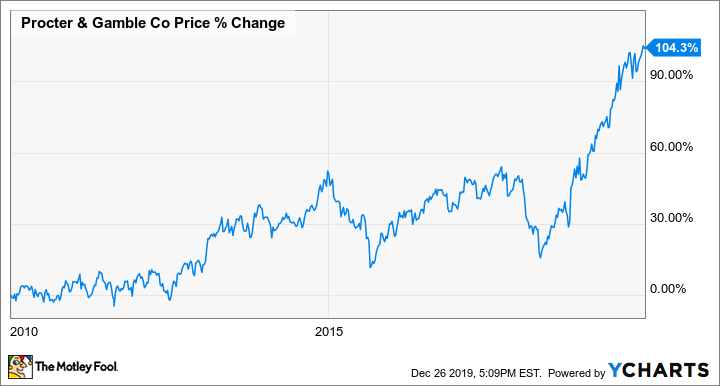 Not only has P&G proven it can adapt, evolve, and reignite its growth strategy, the company should stand the test of time thanks to its development of an economic moat. P&G's economic moat, also known as sustainable competitive advantages, is based on its list of highly popular brands that dominate market share and shelf space, and make P&G a hugely valuable and dependable supplier for retailers needing to move product and attract consumers with innovation, marketing, and brand name. In other words, retailers across the nation are better with P&G products throughout the aisles, and that won't change over the long term. That's why investors are similarly better off owning P&G in their portfolios.

New king on the block?

Walt Disney (NYSE:DIS) is practically ingrained into consumers' lives from top to bottom. It has characters and content that lure you to movie theaters, hotels, and theme parks, and can also keep you entertained at home streaming original content episodes with your favorite beverage in a Disney-themed cup with a Star Wars Death Star-shaped ice cube -- Disney has it all covered. Disney has proven its content is king, but here are a couple of reasons investors can buy shares and hold for the long term. 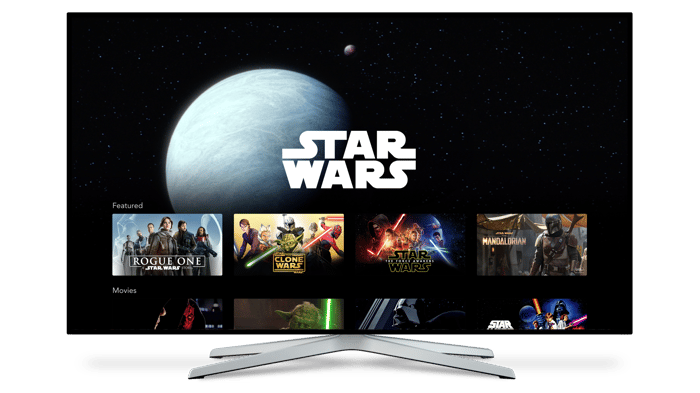 While many large companies fail to adapt to quickly changing markets, Disney has proven it can evolve with whatever the entertainment industry can throw at it. At a time when Disney's highly valuable ESPN entity is struggling with consumers cutting cable, the House of Mouse has proven it can adapt and succeed in new ways. The entertainment juggernaut's recent launch of Disney+ combined with Hulu and ESPN+ for $12.99 was wildly successful in terms of initial downloads and in-app purchases, and its original series The Mandalorian, thanks to "Baby Yoda," has turned into a social media sensation. At a time when content is king, Disney continues to develop movies, shows, and characters that people want to watch. Even if consumers continue cutting the cable cord, the company will find a platform to sell you its content successfully.

Speaking of finding ways to sell you its content, Disney struck gold at the box office in 2019. Fun fact: Disney had six movies top $1 billion worldwide box office in 2019, seven when Star Wars: The Rise of Skywalker crosses that mark, which is more than the industry has totaled in any single year. Disney's success at the box office will likely continue for the long term thanks to Marvel and Star Wars films, and its success will only increase with Disney's acquisition of 21st Century Fox in March. Furthermore, the company's movie dominance will only bolster its successful launch into the streaming world as it continues to build its library of content.

Disney's launch into the streaming wars as a way to offset part of its cord cutting media woes shows investors its ability to adapt and evolve, something absolutely critical if you're going to invest and hold forever. While we've hardly been able to scratch the surface of why investors can buy and hold Disney shares -- remember it also boasts world-class theme parks, additional media entities, and even a healthy dividend -- remember that content is king and Disney has just about all consumer angles covered.

Choosing brilliant stocks that can adapt, evolve, and thrive over the long term is increasingly difficult in the stock market today. That's what makes Procter & Gamble, Disney, and Walmart special and worth consideration for savvy investors' portfolios.

P&G realized the pathway to reignite growth was to cull a huge part of its brand portfolio, which is a difficult and risky decision to make. Disney proved it had the capability, content, and talent to jump into the streaming wars and put industry stalwarts on notice. And Walmart is brainstorming out-of-the-box ideas for new revenue streams, while bolstering its e-commerce platform and reinforcing its already strong brick-and-mortar network. For those reasons, investors can be comfortable buying and holding these companies forever.