Please ensure Javascript is enabled for purposes of website accessibility
Log In Help Join The Motley Fool
Free Article Join Over 1 Million Premium Members And Get More In-Depth Stock Guidance and Research
By Rick Munarriz - May 14, 2020 at 9:00AM

The world's largest cruise line operator and the top dog in family entertainment both have cruise ships in their arsenals, but their near-term recovery prospects are sailing in different directions.

Investing in Carnival Corporation (CCL 0.72%) (CUK 0.23%) and The Walt Disney Company (DIS -1.38%) this year has been a lot like the real-world version of the Pirates of Caribbean theme park attraction: a rough sail with a lot of ups and downs. All sailings have been canceled since mid-March, and neither company is hopeful of getting back to business until August -- even with a limited fleet.

Disney obviously has more to worry about than its four cruise ships these days. All but one of its theme parks worldwide remain closed. Multiplex operators are also closed, drying up what is historically the first release window for its industry-leading movie studio business. The production of new TV shows and movies is also on ice, and most Disney Store locations remain shuttered. Both stocks have taken on water in 2020, making back some of the losses in recent weeks after hitting multi-year lows in March. The businesses are ultimately very different, so let's take a deep dive to see which stock is the better buy. 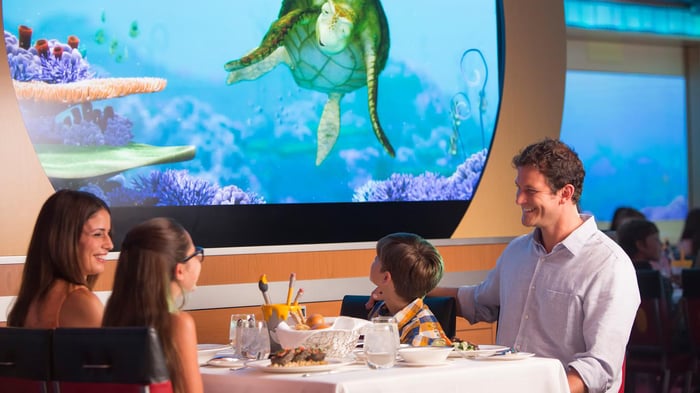 Carnival is obviously all in when it comes to cruising. It's the global leader in this market, accounting for 45% of the people cruising in any given year. It commands a fleet of 104 ships with 249,000 lower berths across several different brands. It plans to add another 17 ships through the next five years, though given the current operating climate it will be interesting to see how that plays out.

Disney expects to expand its fleet from four to seven ships in the next three years, but it's obviously not all in when it comes to the cruise industry. The company doesn't break down how much its Disney Cruise Line contributes to its revenue mix, only saying that it's not a substantial contributor. Right now, diversification is a good thing for the media giant. Analysts believe Disney will be able to stay profitable for the full fiscal year, building on that next year before reaching last year's profit level by fiscal 2022.

Carnival isn't as fortunate. Every Wall Street pro is bracing for a large deficit this year, with some seeing the red ink bleeding into 2021. It's going to take a lot longer for Carnival to bounce back, as analysts see it earning half as much by 2023 as it earned in 2019.

Both companies have suspended their upcoming dividend payments, but Disney's payouts should recover quickly beyond that. Disney will be able to scrape by financially under the current climate. Carnival has had to line up billions in financing -- at high borrowing rates -- just to make it through the year.

All of this may seem to point to Disney as the better buy, but Carnival's stock happens to be trading at more depressed levels than the House of Mouse. Even after bouncing back nicely since its early early April swoon, the stock is still trading 77% below its May highs from last year. Disney has shed less than a third of its peak value.

However, it's hard to recommend Carnival over Disney here. We still don't know when Carnival's ships will start sailing again. There's also no way to tell the ultimate price tag of passenger and crew member lawsuits or how long it will take for consumers to come back around to fill its more than 100 ships. Disney has question marks too, but for every concern about the leisure market, there are positive exclamation points in the form of record-breaking growth for its Disney+ streaming service, the shelter-in-place stability of its media networks segment (which historically commands the thickest share of its segment operating profit), and the potential for e-commerce. There's a huge advantage right now to being a media stock instead of a pure play in cruising.

Even when it comes to cruising, Disney will have an easier time filling its much smaller fleet when the coast is clear. It caters to a younger audience than traditional cruising, which is a group that's less at risk than the typically older passengers on the larger cruise lines who may not be allowed to sail for the time being. It's a premium brand with a niche audience, and it should recover long before 45% of the global cruise audience returns to Carnival with open passports. Disney is the better buy here.

3 Dates for Disney Stock Investors to Circle in August