The customer-service company has bounced back from steep sell-offs in March, and its share price is now up roughly 8% year to date.

Shares of Zendesk (ZEN -0.31%) gained 11.5% in May, according to data from S&P Global Market Intelligence. The customer-service software stock saw recovery in conjunction with the broader market last month, and the gains followed a 20.1% increase for its share price in April. 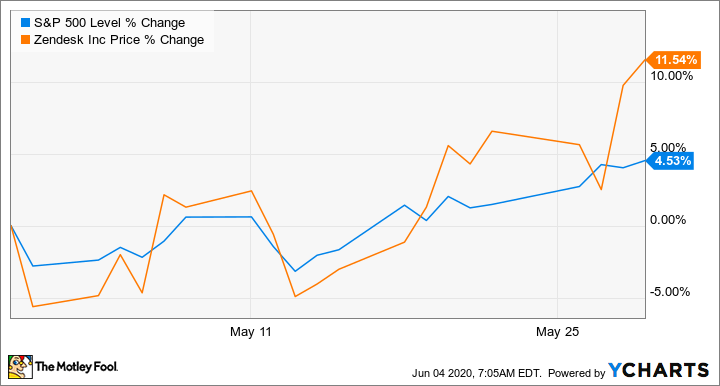 Zendesk dipped early in May's trading despite better-than-expected first quarter results, but the stock recovered as the market regained ground and closed out the month with double-digit gains. The company's share price also appears to have gotten a boost following management's participation in investor and analyst conference calls.

Zendesk released first-quarter earnings after the market closed on April 30, delivering top- and bottom-line results that topped the market's expectations. The company posted non-GAAP (adjusted) earnings per share of $0.11 on sales of $237.5 million for the quarter, surpassing the average analyst targets for adjusted earnings of $0.06 per share on revenue of $236.8 million. The first-quarter beat was followed by a day of sell-offs for the broader market, but Zendesk's shares then proceeded to climb as positive market momentum set the backdrop of May's trading.

While market recovery drove much of the stock's gains last month, Zendesk also saw significant positive movement corresponding with presentations given by management near the end of the month. Senior Vice President Marc Cabi and President of Sales Norman Gennaro gave a virtual presentation for the Cowen and Company 48th Annual Technology, Media & Telecom Conference on May 26, and the two executives followed up the event with an investor meeting hosted by RBC Capital Marktes on May 27.

Zendesk stock has dipped early in June's trading, with shares down roughly 3.5% in the month despite a rally for the broader market. 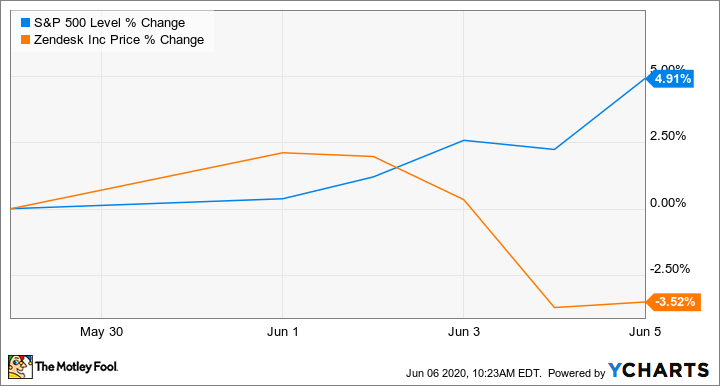 Zendesk is targeting sales between $237 million and $243 million in the second quarter, representing 23.2% year over-year growth at the midpoint of the target. Management is guiding for adjusted operating income between $8 million and $12 million for the period, excluding share-based compensation and other selected expenses.

Zendesk is valued at roughly 9.4 times the average analyst sales target for the year.