In a potential win for international tobacco titan Philip Morris (NYSE:PM), the FDA approved its "heatsticks" and the associated electronic IQOS device for marketing as a "reduced exposure" tobacco product, offering reduced exposure to the substances found in ordinary cigarettes or cigars. The authorization lets Philip Morris advertise the items as safer "modified risk tobacco products," or MRTPs.

Instead of involving actual combustion of tobacco leaves and preservative chemicals in a traditional smoking item such as a cigarette, the IQOS and heatstick system takes a different approach. The user puts a paper-wrapped tobacco "heatstick" into a reusable holder resembling a high-tech cigar, which is then placed in a heater. 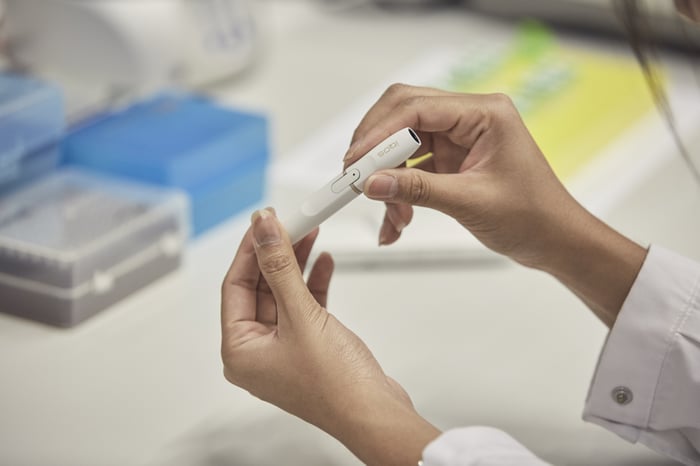 According to Philip Morris, this device "simultaneously heats the tobacco to temperatures up to 350°C, while monitoring its temperature to ensure consistent taste and to avoid burning." The user then inhales aerosol tobacco vapor, rather than smoke, which is said to ensure "the levels of harmful chemicals are significantly reduced compared to cigarette smoke."

While the heatstick system is not risk-free and still delivers addictive nicotine to the user's body, the FDA approval indicates "reduced risk or reduced exposure from using a tobacco product is supported by scientific evidence." The agency also notes that using heatsticks in place of combustion-based tobacco products could help smokers quit, but cautions it will "closely monitor" the IQOS system, watching to make certain the items "do not cause increased use among youth."

Philip Morris, noted as a strong dividend stock, is down slightly in morning trading today despite the FDA news.