While traditional banks are bracing for more loan losses, wealth managers are benefiting from volatility.

UBS Group (UBS -1.28%) is one of the world's premier asset managers, with business lines in investment banking, corporate and consumer banking, and the golden goose -- global wealth management. After plunging in the market's sell-off earlier this year, UBS's stock has been climbing steadily on the back of a strong first-quarter earnings report. It's now down about 7% in 2020 after surging more than 50% from its lows.

While the other big bank stocks have been largely sluggish since March, UBS is racing ahead in a competitive space. Here's what's behind UBS's rally, and why it might be a great buy today. 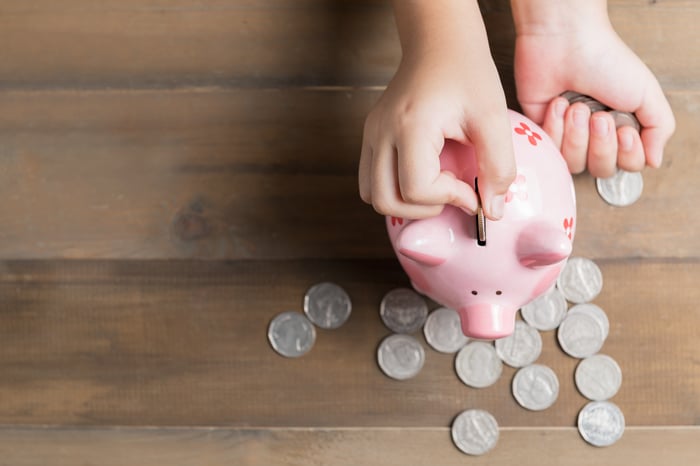 A different kind of recession

During the Great Recession, banks -- both foreign and domestic -- were a large part of the problem. Overleveraged trading divisions were hit hard as mortgage-backed securities, one of the largest markets for bond notes and derivatives trading, were decimated.

The fundamentals of the current recession are very different. No longer so overextended, banks had been on a relatively conservative growth trajectory, bolstered by strong balance sheets and a booming economy. While many are bracing for extensive loan losses, they appear to be better capitalized in this crisis.

And some -- those that rely less on lending and more on wealth management and investment banking -- are doing even better. Given its market positioning and revenue drivers, UBS is one of the institutions getting a boost during this crisis. For the quarter ending on March 31, UBS reported that net profit after taxes rose 40% year over year, a phenomenal gain.

UBS's global wealth management group, which accounted for 57% of the company's operating income, reported numbers that reveal a coronavirus bump. While net interest income remained fairly steady (up 2% year over year), transaction-based income increased 19% over the same period in 2019 and 28% from the fourth quarter on "higher levels of client activity" -- understandable given March's record volatility.

While often derided as the least prestigious (read: Smallest) of the global investment banks, UBS's investment banking division (which contributed 31% of operating income) reported stunning numbers in the first quarter: $1.6 billion in net income, up from $949 million in the previous quarter and $1.1 billion in Q1 2019 -- incredible increases of 70% and 47%, respectively.

With the global recovery still very much up in the air, that continued uncertainty may mean those elevated client activity levels are here to stay. So, while banks like JPMorgan Chase have failed to regain traction after the coronavirus plunge, UBS became the little engine that could.

While 46% of surveyed clients reported short-term (over the next 12 months) pessimism, 70% were optimistic about the world economy over the next 10 years. Of those clients, only 16% plan to decrease their investments, while 47% do not plan to adjust their portfolios. And, in the face of a global recession, 37% plan to increase their investments. With investor sentiment this high, UBS can feel safe delivering value in the face of global turmoil.

It looks like investors can also feel safe about UBS's dividend. In early April, FINMA, the Swiss Financial Market Supervisory Authority, asked banks under its jurisdiction to reconsider their dividend policies in order to shore up their balance sheets in the face of pandemic-induced uncertainty. While UBS complied, splitting its dividend into two payouts this year, Axel Weber, UBS's board chairman, said: "Our financial strength well above regulatory requirements and prudent risk management allow us to deliver on our current capital returns policy."

For the notoriously conservative Swiss bank, these words all but spell a return to consistent and potentially increasing dividends outside of regulatory measures. And, with a price-to-earnings ratio of just 9.2, significantly lower than the 10.4 industry average, UBS's stock should continue on its march upward.

As bank investors look for long-term value and safer investment strategies, UBS as a global asset manager is well positioned to succeed in this pandemic. Its business and balance sheet are strong, and as long as uncertainty exists in the world, it looks like UBS will continue to take advantage.