The U.S. economy officially entered a recession in February that ended the expansion that started in mid-2009. That 128-month period marked the longest continuous growth streak on record. The S&P 500 rose by just over 200% in that time, but shares of Netflix (NASDAQ:NFLX) soared higher by more than 6,000%, making it one of the biggest winners of the decadelong rally.

The streaming-video giant now faces the prospect of operating through what could be a bumpy recovery or even a global recession in late 2020 and into 2021. Just how well positioned is it for a selling environment characterized by weak consumer spending and falling incomes? 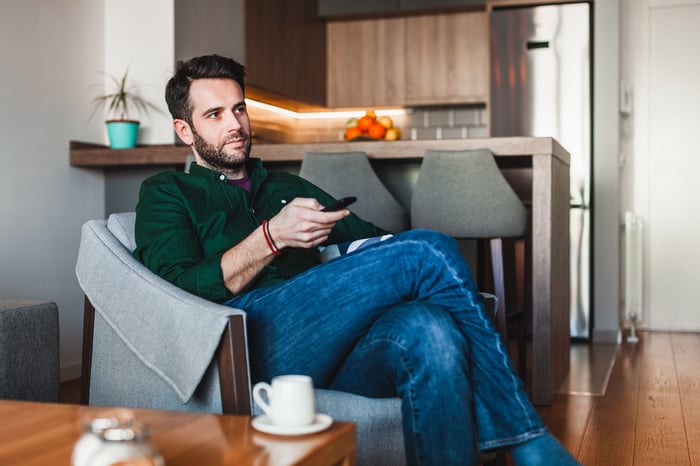 Netflix sells a home entertainment service, putting it in the consumer discretionary niche that (in contrast to staples like groceries and cleaning supplies) often sees revenue slumps during recessions. What's more, the company makes it easy for members to cancel or pause their service. There are no long-term commitments with a Netflix streaming plan, and subscribers can always choose to cancel or downgrade to a cheaper monthly option.

But Netflix's standard plan is just $13 per month, and most of its members spend many hours each week engaged with the service. That value puts it well below costlier choices like vacations and eating-out splurges, which tend to plunge during economic downturns. It's even likely that the streaming service will see more demand as consumers look to cut costs from more expensive entertainment options such as theme park trips or theater visits. The coronavirus pandemic has amplified these trends by putting a higher premium on at-home diversions.

So while Netflix isn't immune to downturns, it is more resistant to recessions than media giants like Disney (NYSE:DIS) and Comcast (NASDAQ:CMCSA), both of which reported sharp earnings declines through the early months of the pandemic.

Netflix has been burning through cash for several years, holds significant debt, and maintains huge spending commitments on content that has yet to hit its services. These factors would typically weigh against it being an attractive recession-era stock. They each raise the risk of financial stress from a growth pullback.

But look a bit closer and you'll see evidence of a flexible, robust financial model. Netflix's operating margin has been improving by roughly 3 percentage points with each passing year, reaching 13% in 2019 versus 4% in 2016. 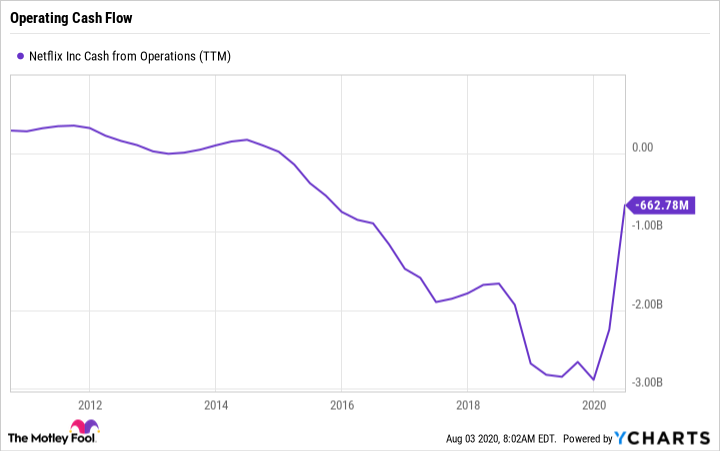 The last few months have demonstrated just how voluntary its cash burn position is, too. When forced to pause spending on new content development during the pandemic, Netflix jumped into positive cash flow in the fiscal second quarter.

"It was a unique window into forward-looking cash generation potential." CFO Spencer Neumann told investors in June as he suggested that the resultant 15% cash flow margin might mark the low end of what shareholders can expect to see once the business matures into its full cash potential in a few years. Rival content owners like AT&T's (NYSE:T) Time Warner segment all carry plenty of debt and hold large liabilities for content payments several years into the future. Netflix is arguably riskier than its mature rivals right now since it hasn't yet achieved sustainable free cash flow. But it is moving in that direction and clearly has room to slash outflows if the need arises.

Of course, a financially strong business can still see its stock price hurt during a prolonged economic pullback. That risk can't be ignored for Netflix shares, which have outperformed the S&P 500 by nearly 300 percentage points over the past five years. A big pullback in the broader market would likely have a disproportionate impact on such a rallying stock.

But short-term slumps aside, Netflix is well positioned to maintain or expand its user base during recessions while improving its balance sheet. Those assets help make it one of the most recession-proof stocks in the media and entertainment sector.