Boeing stock rebounded even as the company lost more orders, IBM was up following a hybrid cloud win, and American Express is considering an acquisition.

The Dow Jones Industrial Average (^DJI 1.27%) was having another strong day on Tuesday, up 0.71% at 2:40 p.m. EDT and handily outperforming the other major U.S. stock indexes. In COVID-19 news, Russia announced that it had approved a vaccine and would begin inoculating teachers and medical workers this month. However, the effectiveness and safety of Russia's vaccine is unknown. 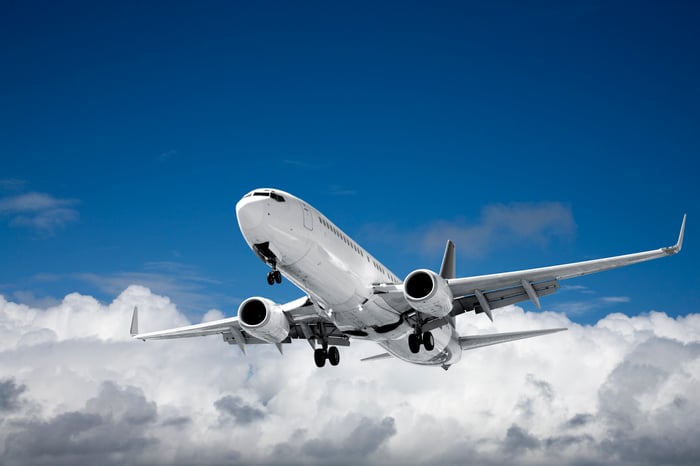 Airplane manufacturer Boeing lost 43 orders for its 737 MAX planes in July. Nearly 400 orders for the still-grounded plane have been canceled this year. The 737 MAX is going through a recertification process, but it may still be months before the planes are cleared to carry passengers.

On top of the cancellations, Boeing delivered just four airplanes in July, including two freighters and two 787 Dreamliners. The company delivered 19 planes in the same period last year.

While Boeing is struggling to deliver planes to customers, demand for air travel is slowly recovering. The Transportation Security Administration (TSA) reported more than 830,000 passengers going through U.S. airport checkpoints last Sunday, the highest level since mid-March. While passenger volumes remain deeply depressed, they've increased by a factor of 8 from the lows reached in April.

Despite the cancellations, shares of Boeing were up about 4% by Tuesday afternoon.

IBM announced on Tuesday that it had signed a multi-year agreement with Coca-Cola European Partners (CCEP) to move the Coca-Cola bottler to a hybrid cloud environment using Red Hat OpenShift and Red Hat Enterprise Linux. IBM acquired Red Hat in a $34 billion deal in 2019, bolstering its hybrid cloud capabilities.

Previously, IBM worked with CCEP to move one-third of its enterprise workloads from a dedicated U.S. data center to IBM Cloud in Europe. Under the new agreement, IBM will manage CCEP's hybrid cloud environment, which will include the use of IBM's public cloud.

IBM is far behind industry leaders Amazon Web Services and Microsoft Azure in the public cloud market, but the company is betting that a hybrid cloud approach will resonate with its large enterprise customers. Shares of IBM were up about 1% by Tuesday afternoon.

A deal could value Kabbage at $850 million, according to Bloomberg's sources, below a $1 billion private valuation achieved in 2017. Kabbage furloughed employees in March due to the pandemic, but it was able to participate in the Paycheck Protection Program and provide loans to more than 130,000 businesses.

Shares of American Express were up 3.2% by Tuesday afternoon on the news. If a deal is reached, it could be announced sometime this month.