Walt Disney and SeaWorld released earnings this month, and both are looking for signs of a recovery in the early stages of reopening their parks.

There hasn't been much good news for vacation stocks. While many travel and entertainment companies were able to open their doors for the summer season, it remains to be seen how well business is going to bounce back amid the continued spread of COVID-19.

Disney (DIS 0.13%) and SeaWorld Entertainment (SEAS -1.02%) both operate theme parks that were closed for more than two months during the pandemic but have since reopened. Both companies released earnings this month detailing how they've been faring as parks reopen, and investors are waiting cautiously to see how much improvement they can expect going forward.

Bringing magic back to the kingdom

The king of entertainment has had a rough few months. One of its main revenue drivers, the parks and experiences business, came to a screeching halt as vacation-goers stayed home. However, Disney operates a diverse assortment of services that helped cushion the blow from this segment. 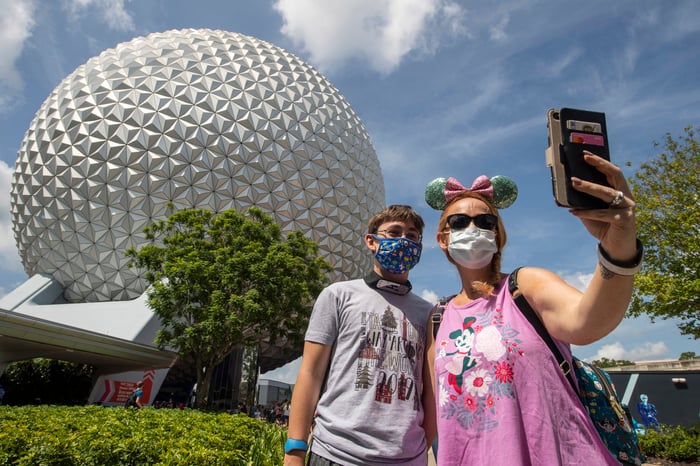 Fiscal third-quarter earnings came out on Aug. 4, and the company suffered quite a bit as compared to the second quarter, which included just the first two weeks of U.S. lockdowns. At that time, the park closures were not as big of a headwind as total revenue increased 21% year over year. However, revenue in the parks, experiences, and products segment declined 10% in a sign of things to come.

In the latest period, total revenue plummeted 42%, while the parks segment decreased 85%. The quarter ended June 27, and Disney World in Orlando had only just begun to welcome guests, while other Disney experiences had more time to build momentum, including its Asia theme parks and Disney Springs food and shopping venue in Florida, which reopened in May. Ultimately, the closures in that business resulted in a $3.5 billion hit to operating income for the company.

Disney ended the quarter with $23.1 billion in cash and equivalents, so liquidity is not an issue. But so far, the theme park recovery is slow. Disney World is operating at "positive net contribution," according to CFO Christine McCarthy, but the uncertainty surrounding COVID-19 in Florida has meant that attendance at Disney World is less than what management expected. That said, bookings indicate that guests are ready to come back as consumer confidence increases (and new COVID-19 cases decline).

Florida is in the thick of the uncertainty with a new record for deaths from COVID-19 in a single day reported recently. Meanwhile, Disneyland in California is still closed, although a dining and entertainment portion has partially reopened. The late summer months will be important for investors to track -- updates regarding coronavirus cases or progress in developing a vaccine will affect park attendance and the company's top line in its fiscal fourth quarter.

Vacation by the sea

SeaWorld's theme parks are in a similar situation, but unlike Disney, the company doesn't have a broad range of services or products that it can lean on in the meantime. That means when parks were closed, revenue was completely on hold as well. 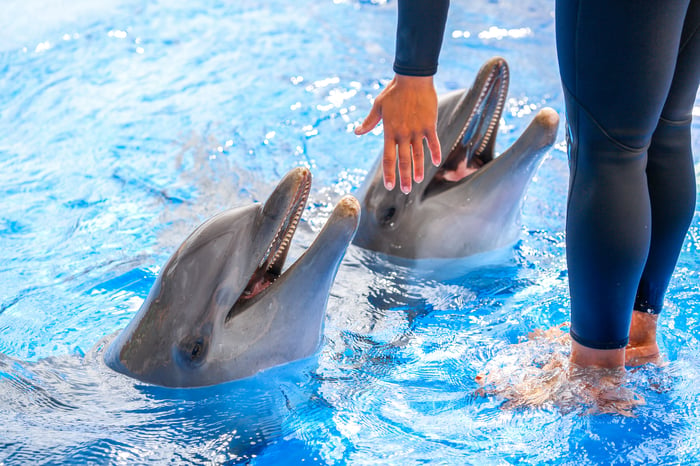 SeaWorld reported second-quarter earnings on Aug. 10, and not surprisingly, there was a 96% decrease in revenue year over year. Although all of its parks were closed for several months beginning March 16, a phased reopening began June 6, and as of the report date, nine of its 12 parks are currently open. Attendance during the quarter decreased 96%, driving the massive decline to just $18 million in total sales.

Since a preliminary report on July 29, the company noted in the week ended July 26, attendance had increased 14% over the first full week of reopening, and that figure improved to 15% for parks that have been open at least 30 days. With limited capacity due to measures related to the pandemic, attendance can only improve so much, but interim CEO Marc Swanson Beyond said during the earnings call, "Without the capacity limitations, attendance versus the prior year would likely have exceeded 50% in some parks on certain days." There has also been an absence of attractions and marketing to boost attendance.

On a positive note, people are anxious to get back to traveling, and the company's Discovery Cove park in Florida already boasts a 169% increase in 2021 bookings over the same period last year. The company is also confident that once it opens popular exhibits and increases marketing, attendance will jump.

SeaWorld had $376 million in cash as of June 30, enough to hold the business over based on its average $12 million monthly cash burn in the second quarter. Additional liquidity totaling almost $800 million means the company can bide its time short term, waiting for visitors to gradually return. But with potential new lockdowns also in the cards, the remainder of 2020 offers little certainty for the company. Its stock is down 43% year-to-date, and it will stay depressed until COVID-19 is behind us.