Is there hope for these three companies that once rocked the Canadian marijuana industry?

However, external headwinds and a few internal mistakes led to huge losses for these companies last year. "Cannabis 2.0," the second wave of recreational cannabis legalization in October 2019 (including vapes, edibles, beverages, concentrates, and more), sparked some hope -- but issues remained as product launches took time and the coronavirus pandemic hit.

The situation is tough for these companies, but they seem to be making efforts to recover. Is there any hope for these pot stocks in 2020? 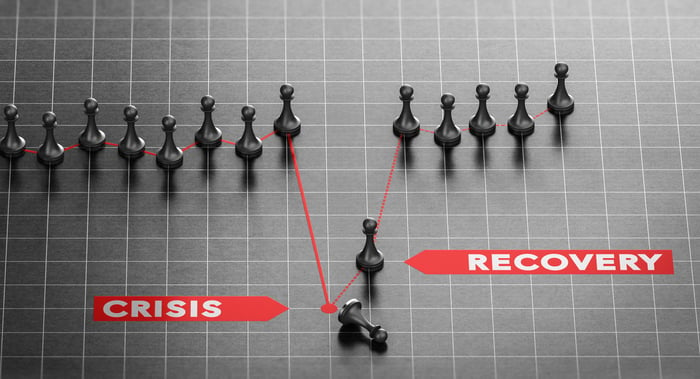 Stock dilution is usually not seen as a good sign, because it reduces the value of an investment. But Aurora Cannabis had no other option but to execute a reverse stock split in May to save itself from being delisted from the New York Stock Exchange (NYSE) when its shares fell below $1, the NYSE standard trading price. Unlike its peers, Aurora hasn't been able to bag a partnership deal with a strong consumer company; instead, it has been adopting various cost-cutting strategies to save cash.

It has shut down five of its smaller facilities and merged a few of them in Canada, while ramping up operations in its Nordic facility in Europe. The company expects these moves to reduce its operating expenses enough to achieve positive EBITDA (earnings before interest, taxes, depreciation, and amortization) by the first quarter of fiscal 2021, ending in September.

As I discussed earlier, Aurora's chances of recovery will depend on key markets like the U.S., where growth is evident. We will know more about how Aurora's strategies are working out when it releases its fourth-quarter results, expected on Sept. 25.

Hexo needs to be careful

An NYSE listing warning in April after its stock, too, fell below $1 put HEXO in a spot. It, too, had no option but to use stock dilution to raise capital. It also sold its Niagara, Ontario, facility, for $10.2 million Canadian dollars. The intention was to focus on profitable operations, including an expansion of its Belleville, Ontario, location.

The company had CA$95.3 million in cash, cash equivalents, and short-term investments at the end of the third quarter. It also managed some additional financing of CA$50 million.

Its net revenue (minus excise taxes) grew 70% year over year to CA$22.1 million. But EBITDA losses came in at CA$4.3 million in Q3. The good news is, that's an improvement from losses of CA$8.5 million in Q3 2019. Hexo hopes to achieve positive EBITDA by the first half of fiscal 2021, which will depend on the impact of the pandemic on the company's operations, store rollouts, and customer demand.

Its performance seems to be on track for now. HEXO has made its way into a new market via its partnership with Israeli medical cannabis producer Breath of Life International, and into the U.S CBD (cannabidiol) market through its partnership with Molson Coors Beverage Company.

My only worry is that HEXO has been leaning way too much toward stock dilution, which doesn't help shareholders in the long run. The company's shares are down 54.8% year to date, while Aurora's and Canopy's stock prices have also fallen by 60.5% and 15%, respectively. Meanwhile, the market as tracked by the SPDR S&P 500 ETF is up by 4.2%. 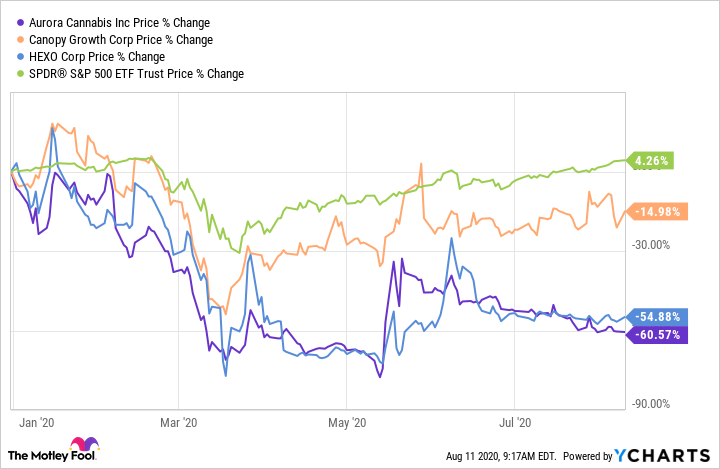 Canopy Growth is on the right track

Canopy Growth is doing everything right. It has a secure balance sheet and a strong partnership with Constellation Brands, which recently increased its stake in Canopy despite the latter's ongoing losses, showing its faith in both Canopy and the cannabis sector. The increased stake resulted in Canopy recording cash and short-term investments of CA$2 billion as of June 30, a pinch of good news in its fiscal first-quarter 2021 results, reported Aug. 10. The company also saw 22% growth in net revenue from the year-ago period, mainly driven by higher medical cannabis sales in Canada and Germany.

Its cannabis derivatives product launches -- including vapes, beverages, and chocolate products -- are also going according to plan. After receiving positive feedback about its few cannabis beverages, Canopy has now produced close to 1.2 million servings of its four ready-to-drink beverages under the Tweed, Houseplant, and Deep Space brands, according to its Q1 press release -- making it the No. 1 cannabis beverage company in Canada.

Especially with Constellation's help, Canopy can capture a good market share with its cannabis beverage products in the U.S.

What are the chances?

Chances are high that U.S. federal legalization of marijuana could happen by 2022, giving these three pot stocks better opportunities to expand their businesses in a booming market. The enthusiasm is evident in the states, like Illinois, that have most recently legalized cannabis and have seen tremendous growth this year, pushing U.S. cannabis companies' revenues sky-high. Their Canadian peers will also enjoy some of these gains if federal legalization sees daylight.

Financially, Canopy Growth is in a safe place and has more expansion ability. Its partnership with Acreage Holdings (which will happen after federal legalization passes in the U.S.) will also give it a wider footprint. HEXO is still a risky investment at the moment, as challenges remain. Aurora Cannabis's cost strategies to achieve profitability look compelling, but let me remind you it also has a reputation for missing its targets. That said, looking at the growth of the marijuana industry this year, it appears that Aurora Cannabis and Canopy Growth are better situated to recover, if their strategies work out.