The pandemic is ushering in a wave of digitalization that will greatly benefit these three businesses.

It may seem inconceivable that businesses can continue to grow during this COVID-19 pandemic. After all, the lockdowns and movement control restrictions have resulted in large swaths of the world being shut down. Businesses are facing plunging demand for their goods and services as more people lose their jobs, while non-essential services are forced to shutter to stop the spread of the disease.

However, the last five months have taught us otherwise. Not only have some businesses managed to stay resilient in the face of adversity, but they have also thrived. The pandemic has helped to separate the wheat from the chaff -- businesses that can adapt and ensure their goods and services stay relevant are poised to emerge even stronger after the crisis abates.

This pandemic has been an unexpected litmus test to separate strong businesses from weaker ones. There's no better time than now to buy these three companies. 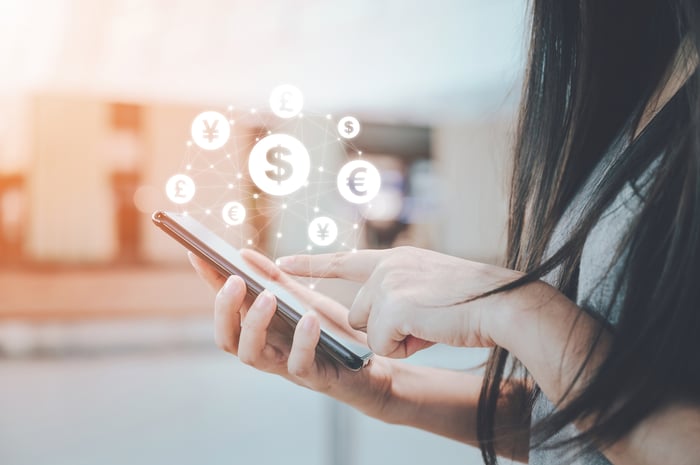 Visa (V 0.30%) is a payments technology company that has championed the use of digital payments even before the pandemic hit U.S. shores. With a total of around 3.5 billion cards in issue around the world, Visa is well-positioned to benefit from the wave of digitalization that is being driven by the pandemic.

Although payments volume dipped by 12% year over year in the latest quarter, this was mainly due to movement restrictions in place that prevented people from swiping their cards in stores and physical retail outlets in April and May. By June, e-commerce purchases, excluding travel, were 12% higher than in January. Visa also added more than 80 million contactless, tap-to-pay cards since January, and tap-to-pay penetration increased in almost fifty countries.

In the same month, Visa also announced that it was working with Facebook (META 2.79%) on a new peer-to-peer payments system using Facebook's WhatsApp messaging software in Brazil. These trends and collaborations pave the way for Visa to continue to grow its user base as digitalization efforts are accelerated worldwide.

Apple (AAPL 0.79%) has been slowly but surely pivoting its business away from being product-centric. The inventor of the iconic iPhone is seeing increasing contribution from its Services division. This division made up 22% of total revenue for the third quarter of 2020 and is growing at around 15% year over year.

The company enjoyed a record quarter with sales growth in all categories, as more people purchased iPhones, Macs, and iPads to stay in touch with their loved ones during lockdowns. Innovations continue to drive sales, with the new iPhone 12 and Apple Watch Series 6 premiering soon in early September during a virtual launch event. Apple also has plans to compete in the digital payments space by acquiring Canadian start-up Mobeewave, a maker of technology that allows mobile devices to accept in-person payments without additional hardware.

MercadoLibre (MELI 2.76%) is the e-commerce giant within South America that is using its Mercado Pago platform to power online and digital payments across the continent. In its recently released second-quarter earnings, gross merchandise volume (GMV) reached $5 billion, up 101% on a forex-neutral basis. Mobile gross merchandise volume jumped even more at 273% year over year and took up 69% of GMV. Another impressive statistic was the growth in unique active users, up 45.2% to hit 51.5 million.

Net revenue jumped 123% year over year to hit $878 million. As explained by Pedro Arnt, CFO of MercadoLibre, on the company's latest conference call, changes in consumer demand brought about by the pandemic have accelerated adoption of digital platforms significantly in the Latin American region. This trend has led to operating leverage resulting from scale benefits and has also allowed the company to temporarily decrease its marketing spend.

With e-commerce purchases hitting new all-time highs in June, when 13 million customers made their first online purchase last quarter, there appears to be much more room for growth for the e-commerce outfit. The company is also forging alliances and collaborations with partners to extend its reach and capabilities. A partnership signed with Paypal (PYPL 1.74%) in December last year has allowed MercadoLibre to integrate Paypal as a payment option in both Brazil and Mexico, thereby opening up the company to a wider audience. And in early August, a collaboration between Mercado Pago, the fintech and payments arm of MercadoLibre, and Telefônica Brasil has opened up opportunities to capture more clients on its platform.