Visa (V 0.30%) beat earnings estimates in its fiscal third quarter but saw a decline in net income due primarily to a reduction in consumer spending related to the recession.

Net income in the fiscal third quarter ended June 30 was $2.4 billion or $1.07 per share, down 23% from the third quarter of last year. Revenue was down 17% to $4.8 billion, driven by declines in payments volume, cross-border volume, and processed transactions.

Payments volume was down 10% year over year, which reflects lower consumer spending due to the recession, high unemployment, and stay-at-home orders. Visa officials noted, however, that payments volume in the U.S. "meaningfully improved" as the quarter progressed, driven by the relaxing of shelter-in-place restrictions in most states. Cross-border volume -- shoppers and merchants in different countries -- was down 37%. Further, total processed transactions were down 13% to $30.7 billion, year over year. 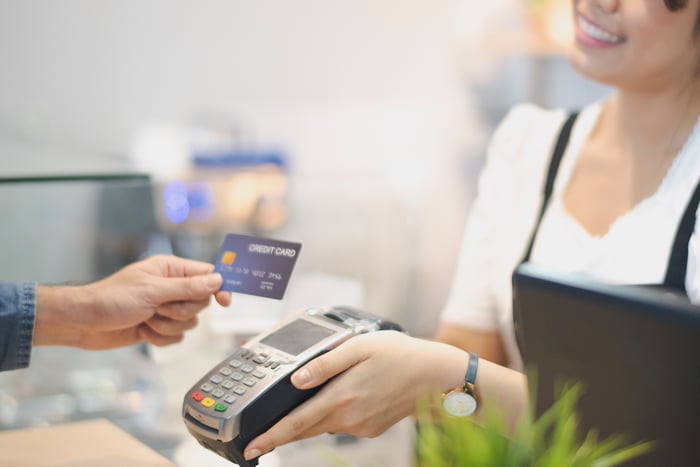 The company did see growth in its e-commerce or online business, as well as in tap to pay, contactless transactions. Visa credentials in e-commerce purchases, excluding travel, was 12% higher in June than they were in January, Visa Chairman and CEO Al Kelly said on the earnings call. Also, spending per active credential was up 6% in the U.S. over that same period. These numbers were also up in the U.K. and Brazil.

Also, in the U.S., Visa has added more than 80 million contactless, tap to pay cards since January, reflecting the social distancing measures in place throughout the country. In the quarter, Visa saw tap to pay penetration increase in almost 50 countries, Kelly said.

"Tap to pay is likely to accelerate post-COVID, especially as consumers start going back to the office where they tend to conduct smaller transactions for their commute, paying for public transit fares and buying food and drinks," Kelly said on the call.

The stock was down about 1% in trading on Wednesday but up 3% year to date.

Why Shares of Visa, Mastercard, and Blackstone Are Rising Today
376%