Please ensure Javascript is enabled for purposes of website accessibility
Log In Help Join The Motley Fool
Free Article Join Over 1 Million Premium Members And Get More In-Depth Stock Guidance and Research
By Keith Speights – Aug 16, 2020 at 5:56AM

You don't hear much about these products. But they're quietly making Pfizer a lot of money.

Which of Pfizer's (PFE -1.10%) products grab investors' attention the most? I'd put BNT162b2, the COVID-19 vaccine candidate that Pfizer is developing with BioNTech, high on the list. The company's top-selling drugs Ibrance and Eliquis would also certainly make the cut. Pneumococcal vaccine Prevnar 13 might be worthy of inclusion as well.

There's another franchise in Pfizer's lineup, though, that doesn't get a spot in the limelight often. But it could be on track to generate annual sales of more than $3 billion. What is this unheralded franchise that's worth billions of dollars to Pfizer? The big pharma company's biosimilars. 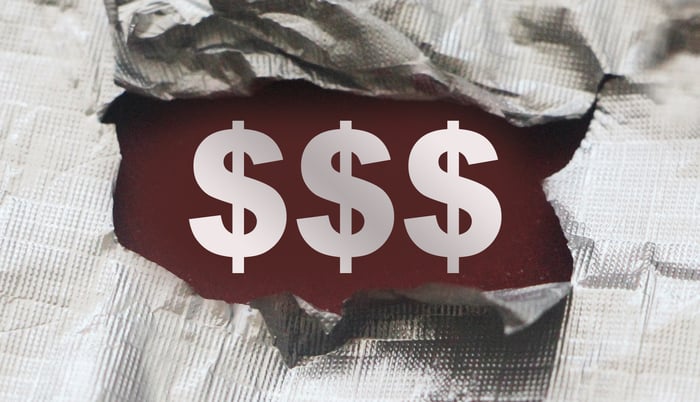 You can think of biosimilars as kind of the generic versions of biologic drugs. These biologic drugs are made within living organisms and tend to be super-complicated to manufacture. Because of this complexity, there aren't nearly as many companies that make biosimilars compares to those that make generic drugs.

Pfizer jumped into the biosimilar business with its 2015 acquisition of Hospira. When the giant drugmaker closed the deal, Hospira hadn't yet won U.S. approvals for any of its biosimilars (although it had received European approvals for three biosimilars.)

Today, Pfizer claims five biosimilars on the market in the U.S. Its biggest winner so far is Inflectra/Remsima, a biosimilar to Johnson & Johnson's blockbuster autoimmune-disease drug Remicade. Inflectra/Remsima raked in $308 million in the first half of 2020, up 6% year over year.

Retacrit stands out as the only other biosimilar in Pfizer's lineup other than Inflectra/Remsima that gets a line item in the company's quarterly earnings release. The biosimilar to Amgen's Epogen, a biologic used to treat anemia in patients with chronic kidney disease, made $176 million in the first half of 2020, more than double its total in the prior-year period.

Pfizer will soon have another biosimilar competing in the U.S. market. In June, the company won FDA approval for Nyvepria. It's a biosimilar to Amgen's Neulasta, a bone marrow stimulant used to prevent infection in patients on chemotherapy. Pfizer plans to launch Nyvepria in the U.S. later in 2020. The drugmaker has also filed for European approval of its Neulasta biosimilar.

In addition, Pfizer won FDA approval in November 2019 for Abrilada, a biosimilar to AbbVie's autoimmune-disease drug Humira. However, the company hasn't launched Abrilada yet. Why? AbbVie built up a strong set of patents that protect its top-selling drug for a few more years. It reached agreements with Pfizer and other potential biosimilar rivals to hold off on their launches until early 2023.

A billion here, a billion there

Based on Pfizer's results in the first half of 2020, the company appears to be on track to generate more than $1.1 billion from its biosimilars franchise. However, the actual total could be well above that figure since Ruxience, Trazimera, and Zirabev should pick up more momentum in the coming months.

Bernstein analyst Ronny Gal thinks that biosimilars are entering a "golden age." He projects that Pfizer could be on course to make around $3 billion per year from its biosimilars down the road. That estimate seems realistic considering the growth for the company's current biosimilars plus the potential for its biosimilar to Humira, which ranks as the No. 1 best-selling drug in the world right now.

The late Illinois Senator Everett Dirksen reportedly once said, "A billion here, a billion there, and pretty soon you're talking real money." Pfizer's biosimilars franchise seems destined to produce plenty of "real money" over the long run. That's great news for the pharma stock on top of its strong prospects for Ibrance, Eliquis, BNT162b2, and other drugs and pipeline candidates.