Please ensure Javascript is enabled for purposes of website accessibility
Log In Help Join The Motley Fool
Free Article Join Over 1 Million Premium Members And Get More In-Depth Stock Guidance and Research
By Howard Smith – Aug 17, 2020 at 7:36AM

The lack of college football and other fall sports will impact the bottom lines of these companies.

The mixed success of professional sports restarting has been closely watched by many in the business world. The NBA, NHL, and MLS have created bubble-like environments that so far have avoided disruption by the coronavirus. Other sports like international soccer and Major League Baseball are attempting to play outside of a "bubble."

While those sports continue to play, college administrators seem pessimistic about their fall sports amid COVID-19-related delays and reschedulings. Now that some major conferences have decided to cancel fall football and other sports, investors can begin to consider the implications. Companies including Disney (DIS -2.60%), DraftKings (DKNG -3.85%), and MGM Resorts International (MGM -1.83%) have seen increases in their share prices partly related to the return of college sports and the income from broadcasting and sports betting. Let's look into whether the cancellation of college football and other fall sports could reverse those gains and impact share prices. 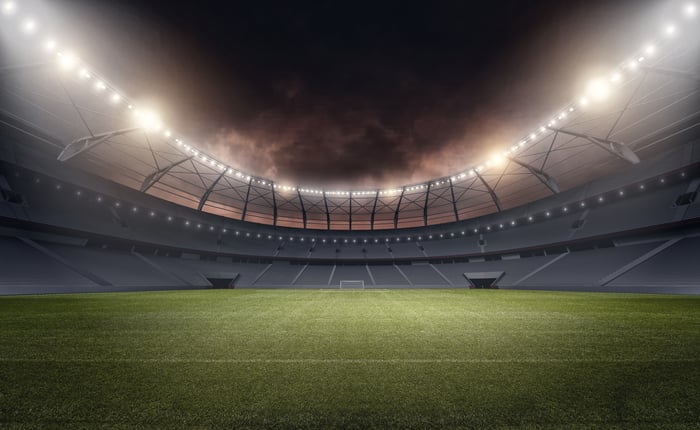 Disney has experienced mixed impacts from the pandemic. It's been hard hit as cruise ships remain docked, theme parks have only recently reopened at limited capacity, and movie production and releases have been paused. On the positive side, growth of Disney's streaming services has been strong, and as of June 27, the company boasts 100 million subscribers combined for its Hulu, ESPN+ and Disney+ streaming services.

But its biggest revenue contributor is still its media networks segment, which includes cable networks and broadcasting.

Percentage of Disney revenue by segment

Data source: Disney financial filings. Note: Numbers add up to more than 100% due to inclusion of intersegment content transactions that are subsequently eliminated from total revenue.

The progress on streaming services alongside the restart of professional sports, including the NBA playoffs at Disney's ESPN Wide World of Sports complex in Orlando, has helped push the share price back to within 10% of where it started the year. Now that college football is at risk, however, the recent gains may recede. Investors should be prepared for another dip in Disney's share price if ESPN's College GameDay isn't there to help bring in revenue this fall.

MGM Resorts has also had a difficult time navigating the pandemic, as its casinos were forced to close and have only reopened at partial capacity as MGM tries to attract consumers who are comfortable to travel again.

But MGM has been pushing more into sports betting via its BetMGM app, which launched in March as a joint venture with GVC Holdings (GMVH.F -12.19%). The company also recently struck a deal with the NFL's Denver Broncos to put a sportsbook lounge inside the Broncos stadium, helping to promote the app.

BetMGM also recently announced a multi-year betting partnership with NASCAR. The agreement will introduce in-race betting options for race fans on the BetMGM platform. It will allow various types of pre-race and in-play bets, including driver matchups, race stage winners, and over/under bets based on the winning car number.

Media mogul Barry Diller has taken notice, and his media and technology company IAC/Interactive (IAC -1.91%) just took a 12% stake in MGM Resorts worth about $1 billion. This news help boost recent gains for MGM's stock, which is up over 35% just in the month of August. 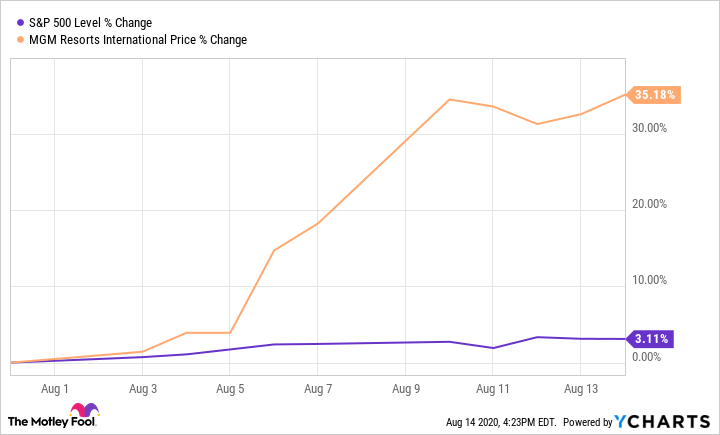 The optimism on sports betting seems to now be built into the share price. If cancellations in fall college sports take the sector down, these recent outsize gains may also evaporate.

DraftKings is another stock that has optimism built into its share price. Shares have held up well considering the online fantasy and sports betting company made its public debut in April, when professional sports had been halted.

But the company is spending money to grow, and has yet to show a profit. Recently reported results showed the company's losses have tripled in the first half of 2020 compared to the year-ago period. Even if DraftKings continues to achieve strong revenue growth -- the company predicts a range of 22% to 37% second-half growth in 2020 -- it is valued at over 45 times sales. Any disruption from setbacks in college sports programs that impact its growth trajectory will likely bring that rich valuation down.

With the potential loss of college football this fall, and even NCAA basketball in question for the spring, the share prices of these three companies may be impacted. But investors might look at this as an opportunity to pick up shares at better prices for a long-term investment.

Disney is a high quality blue chip company that looks to have a success in its streaming business, and pandemic-related affects should eventually wane for its other businesses. MGM Resorts should see its casino business return, and its push into sports betting is likely to become a meaningful future contributor. DraftKings is a speculative investment at this point, but investors going in with that strategy in mind might find a share price sell-off an attractive entry point.

With long-term thinking in mind, the suspension of college sports might be looked at as an opportune time to enter these names.