Unlike its two biggest rivals in the off-price retail landscape, TJX Companies (NYSE:TJX) does have an e-commerce business. That said, e-commerce accounted for just 2% of the company's sales last year. TJX has focused the bulk of its attention on driving continued growth in store traffic.

That focus on brick-and-mortar sales in non-essential categories meant TJX suffered mightily during the peak of the COVID-19 pandemic earlier this year. However, on Wednesday, the off-price giant reported solid sequential improvement in its sales and earnings trends for the second quarter, which bodes well for its future recovery.

In the first quarter of TJX's 2021 fiscal year, sales plunged by more than 50%, as the company's stores were closed for about half of the period. The sudden closure of its stores also sabotaged earnings and cash flow. TJX took an inventory writedown of approximately $500 million, contributing to its pre-tax loss of $1.3 billion. Cash burn totaled nearly $3.4 billion, as the company kept current on its bills even after sales fell to virtually zero in the back half of the quarter.

That said, CEO Ernie Herrman told investors in late May that sales in stores that had been reopened for a week or more were outpacing year-ago levels. This suggested that TJX's results would improve significantly on a sequential basis in the second quarter.

Indeed, TJX reported on Wednesday that sales declined a more tolerable 31.8% year over year last quarter, landing at $6.67 billion. This was slightly ahead of the average analyst estimate of $6.57 billion. The company said that comparable sales for stores that were open decreased just 3%. In other words, most of the year-over-year sales decline was driven by stores that were still closed early in the quarter. 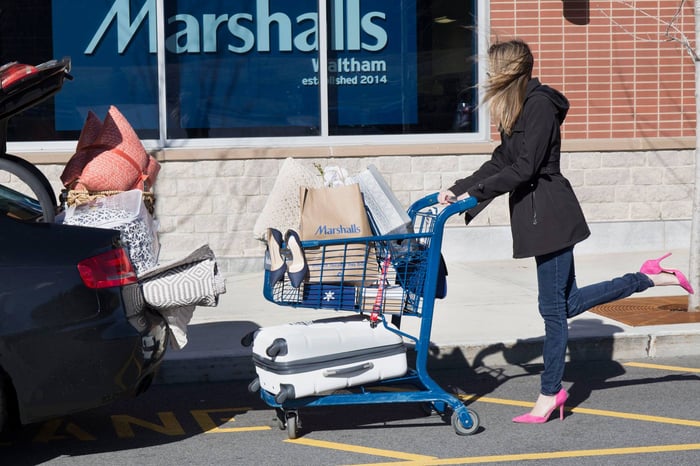 TJX's sales results differed markedly across the company's various divisions. Not surprisingly, HomeGoods was the big standout, with 20% comp sales growth (again including only those stores that were open). By contrast, the T.J. Maxx and Marshalls chains underperformed a bit due to their focus on apparel, and TJX's operations in Canada suffered due to coronavirus-related distribution challenges.

With sales on the mend, TJX's pre-tax loss moderated to just $92 million in the second quarter. Profitability would have been even better but for various pandemic-related costs the company is incurring and a special appreciation bonus paid to most employees last quarter. TJX reported a net loss of $214 million ($0.18 per share), which also reflected the partial reversal of tax benefits it had booked a quarter earlier.

Just as importantly, cash flow surged last quarter, as TJX finally sold the inventory it had paid for in the first quarter. Operating cash flow for the quarter totaled nearly $3.4 billion, with free cash flow just behind at almost $3.3 billion. For the first half of the fiscal year, cash burn was a modest $113 million.

To be fair, some of this surge in cash flow was driven by an unintended inventory reduction, as sales exceeded expectations last quarter while TJX experienced some delays within its supply chain. By the end of the quarter, the company was carrying just $3.74 billion of inventory -- down 26.4% year over year.

The future remains bright for TJX

TJX expects comp sales to decline 10% to 20% in the third quarter, roughly in line with recent sales trends. However, given that there probably won't be large numbers of stores closed for a long period of time this quarter, this guidance points to another sequential improvement in TJX's top-line sales trend. That may enable the company to return to profitability.

The exact timing of TJX's return to profitability isn't that important in the grand scheme of things. Thanks to its strong Q2 cash flow and the issuance of $4 billion of debt at low interest rates in early April, TJX ended last quarter with $6.6 billion of cash on its balance sheet. Clearly, the company has the financial strength to weather the pandemic, no matter what lies ahead.

The same can't be said of many other apparel and home furnishings retailers. Numerous chains are liquidating or closing large numbers of stores. That's creating a massive long-term opportunity for market-share growth.

If TJX can generate in-store sales within 10% to 20% of 2019 levels in the midst of a pandemic -- when many consumers are still avoiding non-essential activities -- it's a fair bet that sales will surge once the pandemic ends. With TJX stock still trading 16% below the all-time high it reached earlier this year, the off-price giant looks like an inviting bargain for patient investors.