Please ensure Javascript is enabled for purposes of website accessibility
Log In Help Join The Motley Fool
Free Article Join Over 1 Million Premium Members And Get More In-Depth Stock Guidance and Research
By Jennifer Saibil – Aug 21, 2020 at 7:00AM

Which athletic gear stock is the better long-term investment?

Many of the decisions in investing pit relative safety against the potential for high growth coupled with high risk. Nike (NKE -12.81%) and lululemon athletica (LULU -6.88%) are both athletic apparel companies, and between them, Nike would appear to be the safe choice, while Lululemon represents the exciting higher-growth category. But there's a lot more nuance here.

Nike is the leader in athletic apparel and footwear -- in fact, despite its focus on activewear, it's the largest, most popular apparel maker overall in the U.S. Its revenue for the fiscal year that ended May 30 was $37.4 billion -- more than most of its largest competitors combined. Nike began by making sneakers under the watch of founder Phil Knight and has expanded to add full lines of clothing and footwear that have become the new American dress code. It also bought the Converse brand. 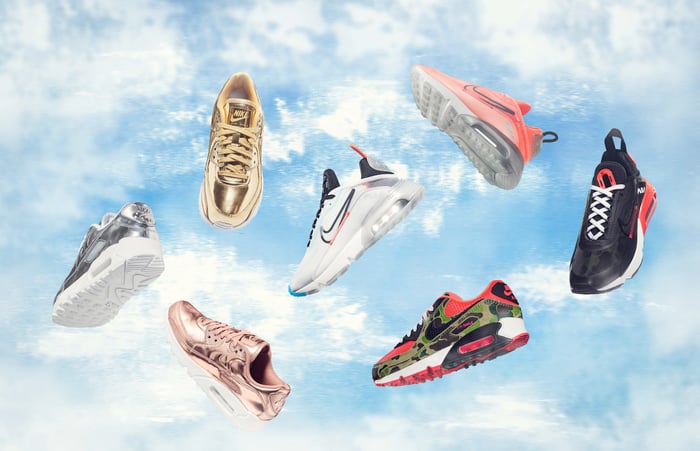 To keep its edge, Nike is always updating its offerings and incorporating new technologies into them. It's also well-known for landing strong celebrity endorsements, and the Jordan line, named for NBA legend Michael Jordan, remains a perennial favorite some 35 years after it was introduced and 17 years after Jordan's (third) retirement from the National Basketball Association.

By comparison, 22-year-old Lululemon is the upstart in the industry, and it takes a bit of a different angle than Nike. It doesn't (yet) sell footwear, and its focus is on yoga-inspired basics. Its differentiation lies in its trademarked fabrics, such as Nulu and Everlux, that have been designed for supreme comfort and flexibility, as well as its devotion to a community of sweat-minded customers. It has also harnessed the power of e-commerce. All of this helped it achieve phenomenal growth, which it kept up until the arrival of COVID-19.

Luluemon has outpaced Nike in growing its sales, but their e-commerce growth rates have been similar, and Nike has maintained impressive growth to pad its already outsized lead.

As seen in the above chart, sales for both companies slowed markedly in the most recent quarter due to the widespread closures of retail stores, but Nike's plunge was much worse. That can partially be explained by Lululemon's relatively heavier reliance on e-commerce -- in the company's fiscal first quarter, which ended on May 3, it accounted for 54% of revenue.

By contrast, in Nike's fiscal fourth quarter, which ended May 31, e-commerce accounted for close to 30% of sales -- but the company is looking to improve on that. 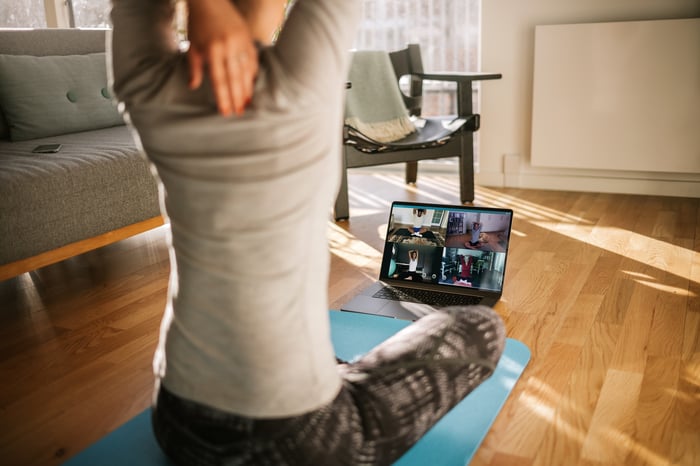 Nike is in the middle of a "digital transformation," as new CEO John Donohoe applies his years of tech-industry experience to the task of bringing the company fully into the digital age. The goal is for digital channels to provide half of Nike's sales, and management is making many changes to hit that target, investing in the Nike and SNKRS apps to build an ecosystem where customers can find products, community, and inspiration. Donohoe also unveiled the consumer direct acceleration strategy on the fiscal fourth-quarter conference call, saying the company wasn't satisfied with its current leadership position, and was "pursuing even further separation. We're transforming Nike faster to define the marketplace of the future."

Lululemon dubbed its mission the "Power of Three plan." The three goals it has in mind under that strategy are to launch innovative products, pursue an omnichannel program, and expand internationally, and it has made fantastic headway on all of these fronts. In a move that shows its ability to expand into new territory, it recently acquired home fitness technology company Mirror -- a move that it expects will bolster its online community and provide more sales through cross collaboration.

Nike and Lululemon both have solid business models that are well-positioned for growth, and so are their stocks. As of Thursday's close, Nike's shares are up by almost 7% year to date, while Lululemon's are up by about 58%, and Nike's annualized five-year return is 14% while Lululemon's is 42%. Luluemon's valuation has historically been sky high, and it's currently trading for around 76 times estimated earnings for the next four quarters, while Nike's forward P/E ratio is around 45.

Nike is a dependable choice that has produced strong returns and has the power to keep a healthy lead over its competitors, but Lululemon has proved that it's more than the flavor of the month, and it has the ability to keep moving forward and producing high growth for investors.