Few companies have risen as fast and as furiously as Pinduoduo (NASDAQ:PDD). From a standing start five years ago, Pinduoduo has become a $100 billion market cap company, and is now the second-largest mass-market e-commerce company in China.

Pinduoduo's mission to date has been to scale up as quickly as possible and offer a wide array of goods at rock-bottom prices through its group-buying platform. Needless to say, that social discount-buying model has been a hit in these times. Yet having already amassed 683 million active buyers and 569 million monthly active users, and now accounting for roughly 25% of China's parcel delivery, this amazing company is now setting its sights on transforming the Chinese agricultural sector, which could be yet another huge opportunity. 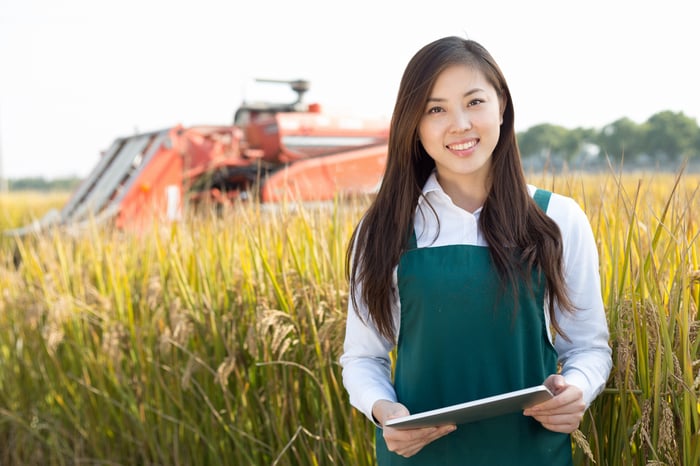 CEO steps down, but looks forward

It should be noted that Pinduoduo's 40-year-old founder, Colin Huang, decided to step down in recent months, although he will still be chairman of the board and retain a super-majority voting share thanks to Pinduoduo's dual-class share structure.

New CEO Lei Chen said on the recent earnings call that Huang is stepping down to "invest and support foundational -- fundamental research in areas that become the future driver of the company such as agri-tech [Phonetic]. We believe this new division of labor allow Colin and I [to] cooperate efficiently as peer company in this next rate of growth and development."

Thus, it appears that Huang is not totally stepping down from Pinduoduo-related ventures, but will be devoting his time to developing a new initiative that Pinduoduo will also be helping to drive. Here's how.

"Our aim is to further consolidate our position as China's number one online agricultural platform and to build a worldwide presence in agriculture," Chen elaborated on the conference call with analysts.

Pinduoduo thinks it can do this because it has such good visibility into consumer demand for agricultural products, technology expertise, and intimate knowledge of supplier pain points. David Liu, vice president of strategy, gave the following facts: Pinduoduo thinks it can remake Chinese agriculture via digitization and by implementing a lot of the technologies that helped catapult it in the world of e-commerce. One way is to optimize crop allocation to better meet demand and reduce spoilage, so that farmers are less susceptible to wild price swings for a particular crop. Pinduoduo is also introducing Duo Duo Farms, a smart farming model that implements the latest farming techniques such as drip irrigation, Internet of Things (IoT) sensors, and robotics to help reduce costs.

One final, and perhaps most interesting, goal is to push Chinese agricultural regions to develop standards for specialized agricultural products that may fetch a premium price, similar to Champagne sparkling wine from the Champagne region of France. Liu had this to say on the conference call:

Take the French Regional Champagne as an example. Sparkling wines made in Champagne are tightly regulated and must be made from a few prescribed bottles using traditional methods to ensure consistent quality. ... Similarly in China, given its vast agricultural resources, we see opportunity to help create new brands for consistently high quality produce for the various geographic indications around the country. In fact, one of our Duo Duo Farm projects in Yunnan is working to establish a nationally recognized destination for yacon grown there. 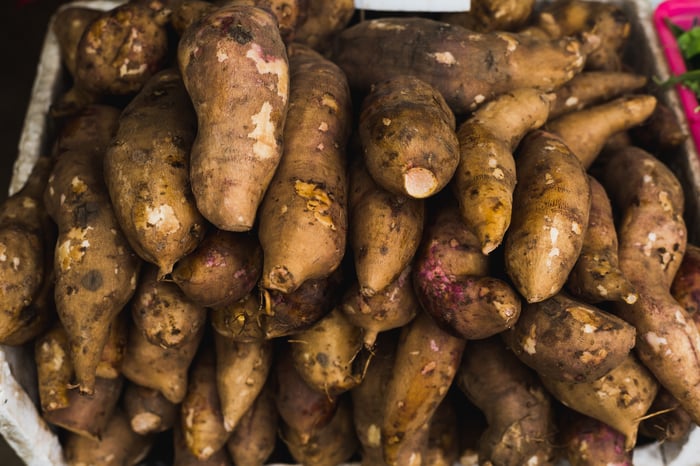 Paying up for visionary growth

No doubt, Pinduoduo is an expensive stock. It still loses hundreds of millions in renminbi every quarter, and the stock trades around 21 times trailing sales. After its recent earnings report, Pinduoduo sold off in the double digits, but that was after a massive run-up this year: 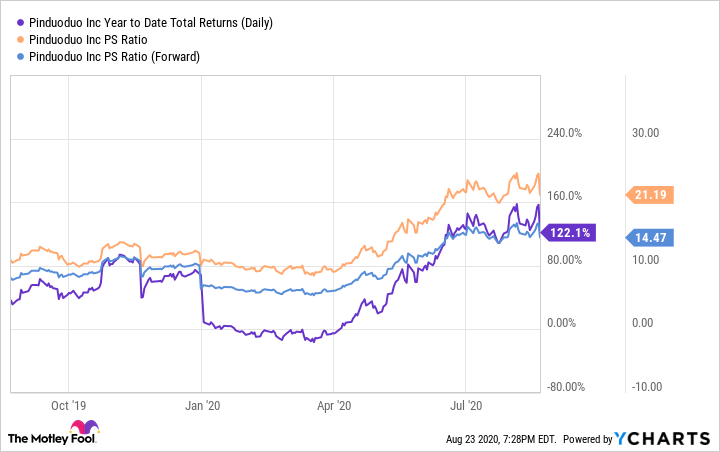 Nevertheless, the sheer amount of user and revenue growth -- which was still up 67% year over year in the pandemic-fueled quarter -- has been eye-opening for Pinduoduo, and much of that owes to the creativity and execution abilities of the management team.

Even with Huang stepping down, it appears he is still quite devoted to the long-term vision for the company, and Pinduoduo is setting its sights on an even bolder new mission just five years into its existence. Thus, I think Pinduoduo has a visionary leadership that investors can get behind when looking out several years.