It's not too late at all to scoop up shares of these Robinhood favorites.

The bad news is that many stocks now sport downright frothy valuations, including a lot of the most popular stocks on the Robinhood trading platform. But don't think you have to stay away from stocks because of the sky-high valuations. Here are three popular Robinhood stocks that are still worth buying even with the market at an all-time high. 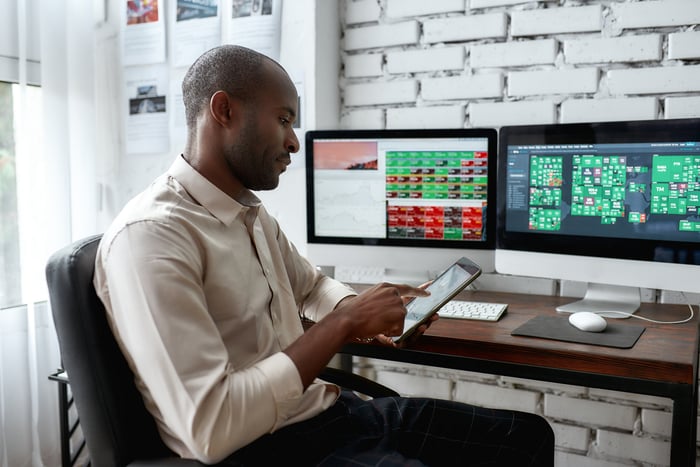 Berkshire Hathaway (BRK.A 0.35%) (BRK.B 0.40%) is one of Robinhood investors' favorite stocks that hasn't fully bounced back from the sell-off earlier this year. But as its chairman and CEO Warren Buffett celebrates his 90th birthday, Berkshire remains a solid stock to buy for long-term investors.

While Berkshire's valuation isn't as low as it was in the first half of 2020, it's still attractive. The conglomerate's shares trade at only 1.3 times book value.

Arguably one of the best reasons to buy Berkshire is its massive cash stockpile (and what Buffett will do with all that money). As of June 30, 2020, the company had cash, cash equivalents, and U.S. Treasury Bills of $142.8 billion. Berkshire bought back over $5 billion worth of its shares in the first half of the year.

Look for more stock buybacks in the future, which will increase the value of its outstanding shares. When the market falls again (note: it's when not if), Buffett will still have a lot of dry powder to buy other stocks and perhaps even an entire company or two on the cheap.

Sure, Amazon.com's (AMZN -0.77%) share price is higher than ever. And yes, the stock trades at a jaw-dropping 116 times expected earnings and over 130 times trailing 12-month earnings. You might think that's a sure-fire sign to stay away. But it's not.

Take a look at the following chart. Amazon stock is actually trading near the low end of its valuation range over the past five years. 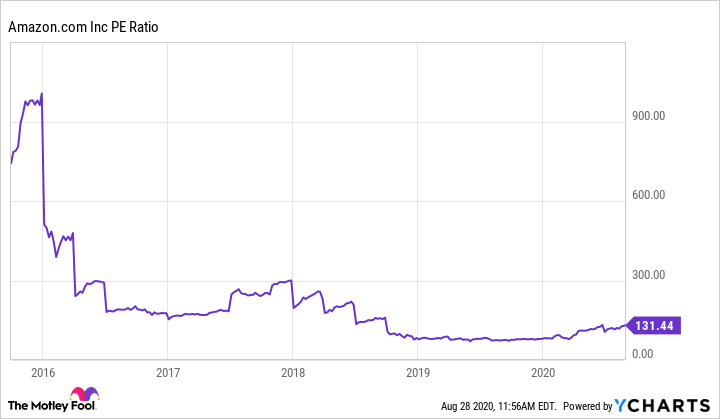 You can pretty much throw earnings-based valuation metrics out the window with Amazon. The e-commerce and cloud computing giant reinvests heavily into opportunities for future growth.

Amazon's business boomed with the coronavirus pandemic. It will likely keep on booming as consumers shop more online and as organizations move their applications and data to the cloud.

The company is expanding its presence in the grocery market with the launch of Amazon Fresh stores. It's going head-to-head with Apple Watch and Fitbit with its new Halo device. Amazon also has new growth opportunities in healthcare and self-driving car technology. This high-flying stock should have a lot more room to run.

You might be surprised that Novavax (NVAX -2.88%) is on the list. After all, the biotech stock is up a whopping 2,600% year to date. It now sports a market cap of around $7 billion. Novavax doesn't have a product to generate revenue and is a long way from becoming profitable. But the opportunities for Novavax are ginormous.

Uncle Sam appears to think highly of the prospects for NVX‑CoV2373, too. In July, Novavax won $1.6 billion in funding from Operation Warp Speed, the U.S. government's initiative to accelerate the development of COVID-19 vaccines.

Novavax is also moving forward with filing for FDA approval for another pipeline candidate, NanoFlu. The experimental flu vaccine beat Sanofi's market-leading FluZone Quadrivalent in a head-to-head late-stage study. If approved, NanoFlu has a good chance of becoming a blockbuster for Novavax.

To be sure, Novavax is much riskier than Berkshire Hathaway or Amazon. But if clinical testing continues to go well for NVX‑CoV2373, this popular Robinhood stock should be an even bigger winner over the next few years than either of the two giants.