Please ensure Javascript is enabled for purposes of website accessibility
Log In Help Join The Motley Fool
Free Article Join Over 1 Million Premium Members And Get More In-Depth Stock Guidance and Research
By Evan Niu, CFA – Sep 1, 2020 at 9:20AM

The Mac maker grabs more share in a growing market.

The wearables market saw unit volumes jump by 14% in the second quarter, according to the latest estimates from IDC. While the COVID-19 pandemic has hurt discretionary spending, it's also driven heightened interest in being able to track health data. Hearables -- wearable audio gadgets that include additional functionalities -- continued to be the largest product category.

Apple expanded its leadership in the market even as the overall market grew. 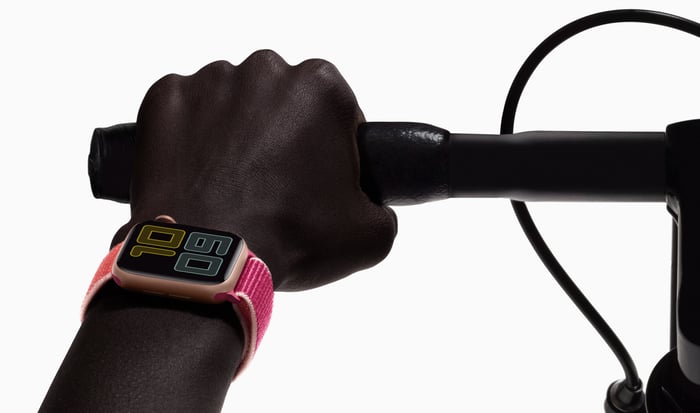 Most wearables are hearables

Worldwide wearables shipments were 86.2 million in the second quarter, and hearables represented 60% of all wearables. Watches and wristbands accounted for just under 40%, with other nascent categories like rings or connected clothing being little more than a rounding error following a 59% year-over-year decline.

Here were the top five vendors in the second quarter.

The majority of Apple's shipments were hearables. The Mac maker shipped an estimated 23.7 million AirPods and Beats products, representing over 80% of the Cupertino tech giant's total volumes. IDC says that demand for earworn wearables was bolstered by the ongoing shift to remote work and remote learning. Additionally, AirPods are more affordable than Apple Watch, and Apple launched its annual back-to-school promotion near the end of the quarter that included free AirPods with qualifying hardware purchases.

Wristbands and other wrist-worn wearables like smartwatches saw units decline by 4.4%. IDC notes that Fitbit has made progress in strengthening its brand by investing in different ways to detect disease. Last week, Fitbit unveiled its 2020 product lineup, including a new Sense smartwatch that will soon be able to take ECGs while utilizing an electrodermal activity (EDA) sensor to measure stress and anxiety levels. The company had already reported its 29% drop in shipments to 2.5 million when it announced earnings earlier this month.

China's Huawei continues to climb the rankings, posting the strongest growth (46%) in the wrist-worn category. Huawei launched its Watch GT last year and is expected to release a higher-end Watch GT 2 Pro as early as next month. Xiaomi continues to hold its own in wristbands thanks to its affordable Mi Band fitness trackers.

Apple Watch shipments increased 14% to an estimated 5.8 million. The older Apple Watch Series 3 continues to sell well at its lower price point, and the company is expected to unveil the Apple Watch Series 6 alongside the iPhone 12 soon. Apple is also reportedly working on third-generation AirPods that are scheduled to launch in early 2021.