Please ensure Javascript is enabled for purposes of website accessibility
Log In Help Join The Motley Fool
Free Article Join Over 1 Million Premium Members And Get More In-Depth Stock Guidance and Research
By Evan Niu, CFA – Aug 26, 2020 at 8:00AM

Fitbit's (FIT) most popular smartwatch to date has been the Versa, thanks in large part to a relatively affordable price tag. The Ionic, which flopped a few years back, had been more expensive in comparison. The wearable gadget maker has just unveiled its lineup heading into the holiday shopping season, which includes a new smartwatch that will try once again attempt to challenge Apple (AAPL -4.91%) directly.

Here's what investors need to know about the Fitbit Sense. 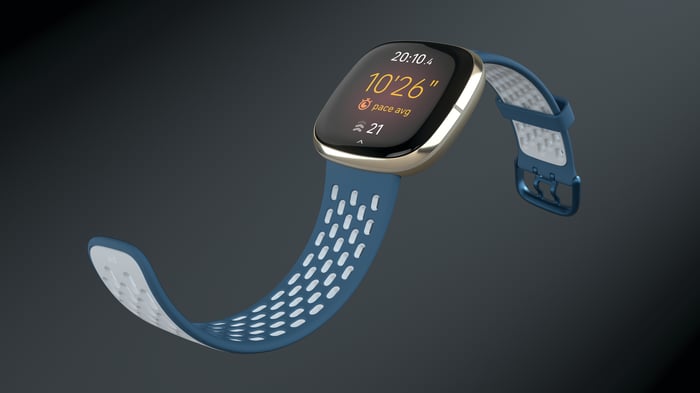 The Sense may borrow from the Versa's overall aesthetic, but Fitbit is packing in more features to justify the higher $330 price tag. That includes an electrodermal activity (EDA) sensor that the company says can help users manage stress levels and also has the ability to take an electrocardiogram (ECG) once the FDA clears the device for that functionality. Apple Watch added ECGs, which can help detect signs of atrial fibrillation (AFib), in 2018.

There will also be an on-wrist skin temperature sensor, as well as the same SpO2 sensor that Fitbit has been including on its products in recent years for blood oxygen monitoring. Apple Watch does not currently monitor stress, temperature, or blood oxygen levels. Placing your palm on the smartwatch face will activate the EDA sensor and look for minor electrical changes in the sweat on a user's skin. The Sense will then combine about a dozen biometric inputs, including heart rate, sleep, and activity data in order to calculate a Stress Management Score. 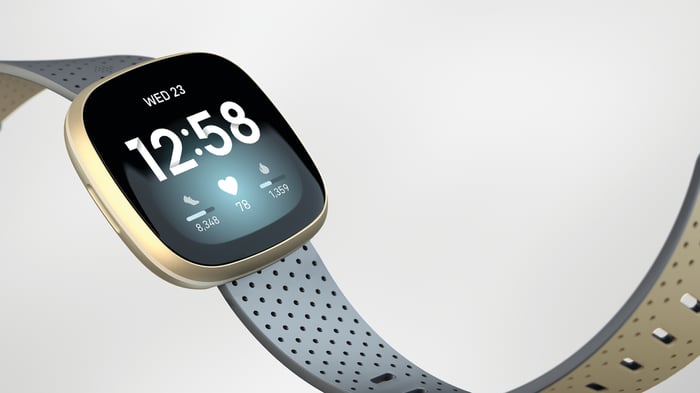 The wearable tech company is also refreshing the Versa with a third-generation model that has some fairly minor updates. The Versa 3 doesn't have as many sensors as the Sense, but Fitbit added a built-in speaker to make it easier to use virtual assistants and built-in GPS.

The Versa 2 had incorporated Amazon's Alexa, and the new model is adding Alphabet's (GOOG -2.63%) (GOOGL -2.63%) Google Assistant to the mix, which is unsurprising considering the search giant's pending acquisition of Fitbit. The Versa 3 is getting a slight price bump, now starting at $230 compared to its predecessor's $200 entry-level price point.

At the low end of the pricing spectrum, Fitbit is updating the Inspire 2, a basic tracker that will cost just $100. Inspire 2 is bundled with a one-year trial to Fitbit Premium (worth $80), a generous inclusion that offers a compelling value proposition.

The updated lineup will need to carry Fitbit through the holidays at a time when Fitbit's unit volumes have been slipping and Google works to secure regulatory approval amid a European Commission antitrust investigation that is scrutinizing the proposed acquisition. The concern is that Google will leverage sensitive health data for ad targeting, and Fitbit's progress in developing new wellness metrics will likely only give more ammo to critics.

Meanwhile, Apple -- which grabbed over half of global smartwatch revenue in the first half of the year -- will soon host its annual fall product event and show off Apple Watch Series 6, which is expected to add blood oxygen monitoring and features related to mental health.