Please ensure Javascript is enabled for purposes of website accessibility
Log In Help Join The Motley Fool
Free Article Join Over 1 Million Premium Members And Get More In-Depth Stock Guidance and Research
By John Bromels – Sep 3, 2020 at 9:46AM

But for some investors, it might actually be worth it.

Whether it's the big birthday present on my wishlist (currently the Oculus Quest VR headset, if any of my relatives are reading this) or just a free pen from a convention booth, I'm a huge fan of getting something for nothing.

So when I found out that Robinhood was offering a "free stock" to anyone who signed up for a new account, I was pretty excited. However, as with many things about Robinhood, the reality didn't live up to the hype. Here's what I discovered. 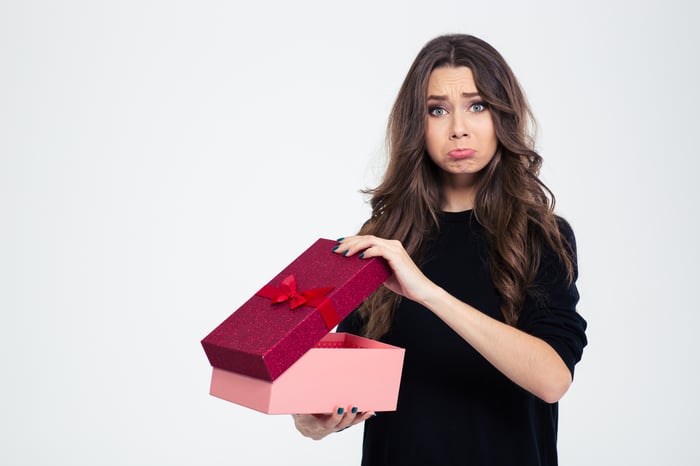 Robinhood is a pioneer of offering free stuff to investors. It was one of the first brokerages to offer commission-free trading in 2013. Now it's offering "free stock" (well, one free share of stock) to new account holders.

The offer itself is real: one lone share of stock automatically got added to my account, for free, immediately after I finished the setup process. It was that simple. However, Robinhood's ad said I could get a free stock "like Microsoft, Visa, or Johnson & Johnson." But that's misleading. Here's why.

Microsoft, Visa, and Johnson & Johnson are great companies. When I signed up for my Robinhood account, Johnson & Johnson's shares were trading just under $150/share, and Microsoft and Visa were at about $200/share.

I was funding my account with just $100, so a share of any of those three stocks would have more than doubled my money. However, like many things on Robinhood, there's fine print attached. That fine print lets you know that the odds are stacked against you:

At those odds, you have a less-than-1% chance of receiving a share of Microsoft, Visa, or Johnson & Johnson. That's why the ad copy says you can get a free stock "like" one of those companies. Even penny stock is "like" Visa stock in that, well, they're both stocks.

As you probably guessed, I didn't get a $200 share of Visa. Instead, I'm now the proud owner of a share of Helix Energy Solutions Group (HLX 6.97%). I had to laugh, because Helix is an oilfield services company, an underperforming sector I've been saying investors should avoid. Lucky me!

When I received the share on Aug. 11, it was worth $4.81. However, Robinhood doesn't let you trade your free stock until two days have passed, and of course Helix's shares dropped sharply on Aug. 12. Now it's worth about $3.60. Not-so-lucky me!

But hey, I really shouldn't complain. After all, I only funded my Robinhood account with $100. At $3.60, with no trading fees, selling that free share would have earned me a 3.6% return on my investment in just two days. It's no Oculus Quest headset, but it's something.

Robinhood isn't alone in advertising a too-good-to-be-true perk for signing up. Brokers Merrill Lynch and TradeStation both advertise cash rewards for new accounts, of "up to $600" and "up to $5,000," respectively. That sounds much better than a lousy $3.60 share of stock!

But again, there's fine print: At TradeStation, you can only get that $5,000 by putting $5 million into your account, and to get any reward at all ($50), you'd have to invest at least $5,000. That's better than stingy Merrill Lynch, which doesn't give you any cash rewards unless you put in at least $20,000! And both brokers require a long waiting period with no withdrawals (90 days for Merrill and 270 for TradeStation) before you ever see that cash.

So, even though it's not as good as it's cracked up to be, Robinhood's free stock share is actually a comparatively good deal. If you're interested, though, I suggest starting the setup process via a link or ad that mentions the "free stock" offer -- like the one here, at The Ascent --because I can't tell if it automatically applies to all new accounts.

And be sure to read all the fine print! Because next time, I'll tell you about how reading the wrong fine print on Robinhood came back to bite me.