Please ensure Javascript is enabled for purposes of website accessibility
Log In Help Join The Motley Fool
Free Article Join Over 1 Million Premium Members And Get More In-Depth Stock Guidance and Research
By Kailey Hagen – Sep 5, 2020 at 10:16AM

2020 is hurting you more than you realize.

What do Apple CEO Tim Cook, actress Jane Lynch, and Senator Amy Klobuchar have in common? They're just a few of the over 3.7 million Americans who will likely see their Social Security benefits reduced because they were born in 1960. If you were also born that year, you too could get less from Social Security through no fault of your own.

It's all to do with the way the government figures your Social Security benefit and an all-important calculation that takes place in the year you turn 60 -- that's 2020 for those born in 1960. Here's a closer look at why your benefits might suffer and what you can do about it. 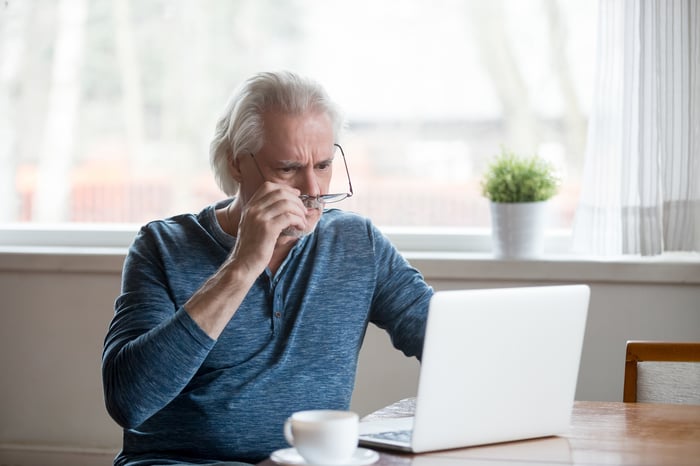 Problem No. 1: The AIME calculation

The reason those born in 1960 will likely see smaller Social Security checks is because of the average wage index (AWI). The government calculates this every year by dividing the total wages U.S. workers earned during the year by the number of W-2s that went out for that year.

The Social Security Administration uses the AWI in a couple of ways when figuring out your Social Security benefit, including the calculation of your average indexed monthly earnings (AIME). This is your average monthly earnings over your 35 highest-earning years, adjusted for inflation. The government determines your AIME by dividing your AWI from the year you turned 60 by the AWI from each year you earned income and multiplying this by your earned income for the year to get your annual indexed earnings. Then, it adds up your total indexed earnings from your 35 highest-earning years and divides this by 420 -- the number of months in 35 years -- to get your AIME. The Social Security Administration then plugs your AIME into the Primary Insurance Amount (PIA) formula explained below.

A higher AWI in the year you turn 60 translates to a higher AIME, which means a larger benefit for you. But those born in 1960 are at a disadvantage here because the 2020 AWI is going to be based on an unusual year. Unemployment hit a low of 3.5% in February 2020, which means a lot of Americans were working and earning income that will likely require them to submit a W-2 when they file their 2020 taxes. But then the pandemic hit and millions of Americans lost their jobs, meaning the total wages American workers earned are likely going to be lower than they have been in years past.

Fewer wages divided by a large number of W-2s will result in a lower AWI this year. That means the key indexing factor those born in 1960 use to calculate their AIMEs will likely be lower than it would've been if this had been a traditional year.

The government takes your AIME and applies it to the current Primary Insurance Amount (PIA) formula. This determines how much you get from Social Security if you claim your benefit at your full retirement age (FRA). This is somewhere between 66 and 67 for today's workers. If you begin benefits before or after your FRA, the Social Security Administration will adjust your benefit up or down accordingly. Here's a guide explaining how this works.

The PIA formula used to calculate your benefit is always the one that was in place in the year you turned 62. For 2020, the formula is as follows:

In the above example, $960 and $5,785 are called the bend points. They're the points that separate one percentage tier from the next and they change from year to year based on -- you guessed it -- the AWI for the year you turn 60.

Since the AWI for 2020 is likely going to be lower than projected, that means the bend points used in the PIA formula will also be lower than they would've been if 2020 had been a normal year. For those born in 1960, that means fewer of your AIME dollars will qualify for the 90% and 32% tiers, resulting in smaller benefit checks.

You can try reaching out to your congressional representatives to request that they develop an alternative means of calculating the 2020 AWI so it doesn't punish those born in 1960 quite so much. But there are also things you can do on a personal level to maximize your Social Security benefits.

First, work as long as you're able to. Aim for at least 35 years so you don't have zero-income years weighing down your AIME calculation. If you work even longer, your higher-earning years will replace your lower-earning years, resulting in a higher AIME and more money for you. Working longer can also give you more time to build up your personal savings, and it may shorten the length, and therefore the cost, of your retirement as well.

You can also try delaying your Social Security benefits. Every month you delay benefits increases your checks slightly until you reach your maximum benefit at 70. This is 124% of your scheduled benefit if your FRA is 67 or 132% if your FRA is 66. Here's a closer look at how delaying benefits can help you, assuming you're able to live without Social Security in the early years of your retirement.

The bottom line is that you shouldn't let this quirky Social Security rule get you down. One of the best things about Social Security is that, even though the government sets the rules, you still have a lot of latitude. Making the right choices can help you squeeze every penny out of the program.