Please ensure Javascript is enabled for purposes of website accessibility
Log In Help Join The Motley Fool
Free Article Join Over 1 Million Premium Members And Get More In-Depth Stock Guidance and Research
By Rachel Warren - Sep 7, 2020 at 7:30AM

The biopharmaceutical company is expensive, but its drugs' recent sales make the company an alluring option.

A tumultuous 2020 has revealed the strengths and weaknesses of companies across the stock market spectrum. While many businesses have struggled to adjust to pandemic highs and lows, others have reaffirmed their fortitude. Vertex Pharmaceuticals (VRTX 0.97%) is one such company. The biopharmaceutical is one of the top ten highest-performing healthcare stocks of the S&P 500 since the start of the year.

Given Vertex's increasingly prominent position in the cystic fibrosis therapeutics market with Trikafta and other approved treatments for the disease, it's not surprising that some analysts expect the company to increase its earnings by nearly 25% each year in the next five years. If you're thinking about adding some new stocks to your portfolio, here's why Vertex Pharmaceuticals ought to be one of them. The stock has been rising steadily for years

To illustrate the extent of the returns Vertex has generated for investors over the years, let's imagine you invested $5,000 in the company shortly after its stock split in 2000. At this time, shares were trading at about $80 each. If you had invested $5,000, you would have been able to purchase about 63 shares. Today, that investment would be worth approximately $16,930. 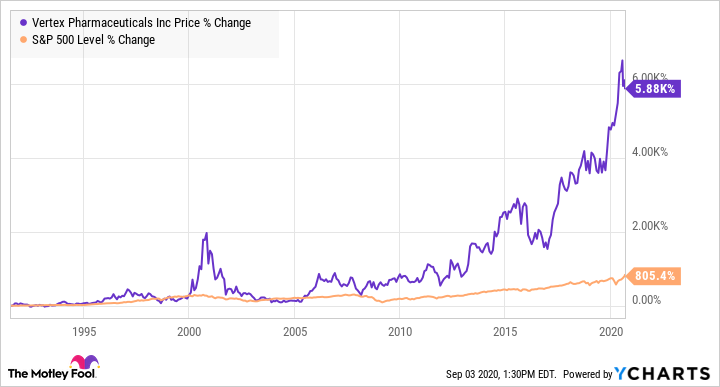 The cystic fibrosis market and beyond

During the first quarter of 2020, which ended March 31, Vertex achieved a 77% year-over-year increase in revenue to $1.515 billion. The company's impressive revenue increase in the first quarter of 2020 was a testament to the unprecedented success of Trikafta. The treatment amassed earnings of $895 million after it launched in the U.S. and was taken up as a treatment by over 18,000 patients.

Investors eagerly awaited Vertex Pharmaceuticals' second-quarter earnings release on July 30 to see whether the coronavirus pandemic had had any substantial effect on the company's top and bottom lines. Any concerns Vertex shareholders had were quickly quelled, as the company reported a substantial 62% year-over-year increase in its Q2 revenue, ringing in at $1.524 billion. The company's net income based on generally accepted accounting principles (GAAP) went up by 213% in Q2 from the year prior.

In addition to Trikafta, which contributed $918 million to Vertex's balance sheet in the second quarter, other cystic fibrosis drugs proved key sources of revenue. Symdeko/Symkevi brought in $172 million, Orkambi earned $232 million, and Kalydeco earned $203 million. Each of these drugs' sales, however, shrunk from Q2 2019, most likely due to the introduction of Trikafta to the U.S. market.

Vertex also has some exciting candidates in its development pipeline. These include an investigational gene-editing therapy in development with CRISPR Therapeutics (CRSP -3.96%), which aims to treat individuals with severe sickle cell disease (SCD) and a rare genetic disease called transfusion-dependent beta thalassemia (TDT). Also of note is Vertex's early stage program to develop a potential cell therapy for the treatment of type 1 diabetes, designed to replace insulin-producing islet cells within the body. Vertex plans to submit an Investigational New Drug (IND) application to the FDA by late 2020 to support studies of the potential therapy's effects on type 1 diabetes patients.

Vertex has raised its guidance for the full-year 2020. The company now expects revenue to fall in the range of $5.7 billion to $5.9 billion, up from an original predicted range of $5.3 billion to $5.6 billion.

Sitting at $269 per share and trading at over 34 times its earnings as of Sept. 3, Vertex Pharmaceuticals isn't a cheap stock by any means. But in this case, I would argue that Vertex is worth every penny. Between the company's dominance of the cystic fibrosis therapeutics space and its burgeoning pipeline, not to mention its solid history of earnings growth, this unstoppable growth stock is one you can buy and hold for years to come.