This e-commerce stock could be just starting to break out.

All of a sudden, tech stocks are getting walloped.

The tech-heavy Nasdaq (^IXIC) has sunk more than 10% in just three sessions, putting it in correction territory, while the sudden plunge in high-profile names like Tesla, Apple, and Zoom Video Communications has dragged down the S&P 500 and Dow Jones Industrial Average as well, which have fallen 7% and 5.5%, respectively.

While there was no specific news driving the high-growth sector lower, investors seemed to get jittery given the Nasdaq had climbed 34% prior to the recent pullbank, and news that Softbank had made billions of dollars in options bets on tech names only seemed to add to the skittishness.

The tech-based sell-off has taken down nearly every high-profile stock in the sector, from the FAAMNG group to cloud stocks to sectors that have been especially popular this year like e-commerce and electric cars. However, one company has bucked the trend over the last few days and actually made gains, even while the rest of the Nasdaq has imploded. Stitch Fix (SFIX 7.59%), the online personal stylist, has gained 3.4% over the last three sessions, making it a rare winner during the sell-off. 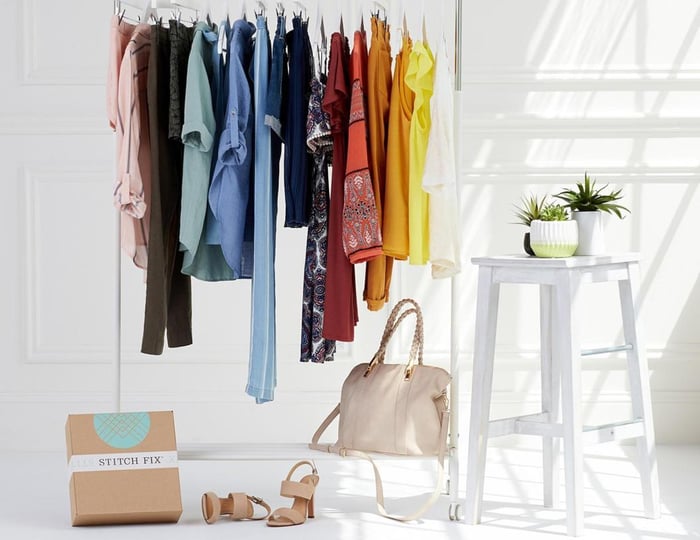 Stitch Fix's recent gains haven't come on any news. Rather, investors seem to be taking a second look at the e-commerce stock after it missed out on the rally in the subsector earlier this year. Take a look at how Stitch Fix, which is best known for sending customers curated boxes of clothing on a regular basis, has performed compared to other e-commerce stocks. 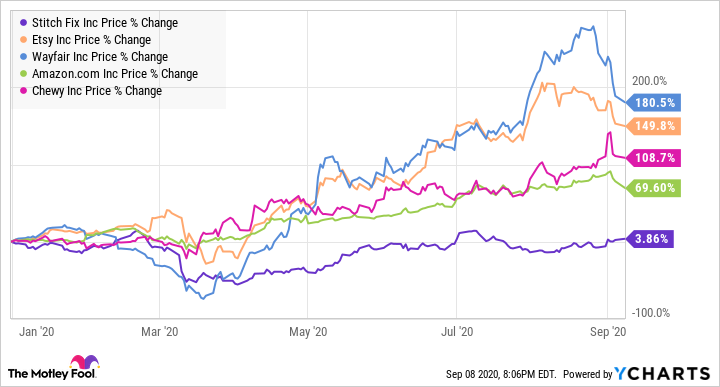 Clearly, Stitch Fix has been a laggard, but there's a good reason for that. Unlike its peers above, which offer pet products, essentials, or home goods, Stitch Fix sells clothing, the retail category that's been hardest hit by the pandemic. From March through July, according to the Census Bureau, sales at clothing and clothing accessories stores fell 48%. Much of the reason for that fallout is that clothing stores were closed during the lockdown period, and consumers have been reluctant to visit stores even since they've reopened. However, clothing has also been in low demand, as Americans have been mostly quarantining at home without the need to dress up for work or social events, and that's hurt Stitch Fix.

In the company's third quarter, which ended on May 2, revenue actually fell 9.1% to $371.7 million as the company was forced to temporarily shut down three of its fulfillment centers, leading to a backlog in order fulfillment -- which, combined with softer demand in the second half of the quarter, caused the decline in revenue. However, management believed that revenue would have grown had its distribution centers not closed.

Things have been looking up since the end of the lockdown period, as the company said it returned to net merchandise revenue growth in May, which could signal better-than-expected results in the fiscal fourth quarter, which the company will report on September 22. Analysts expect revenue to fall 3.7%, despite momentum that appears to favor Stitch Fix.

In one bullish sign for online retailer, overall e-commerce sales in the April-June quarter jumped 44.5%, up from 14.6% in the first quarter of the year, as Americans flooded websites to do their shopping, avoiding brick-and-mortar stores. Stitch Fix likely benefited from that trend, and its base of auto-ship customers has remained loyal -- auto-ship retention rates were at a three-year high as of the end of April.

Whether the correction in tech stocks continues or turns out to be just a blip remains to be seen, but investors are clearly treating Stitch Fix differently from its e-commerce peers. While the company missed out on the springtime jump in online retail stocks, it could make up for it now -- it looks like an undervalued e-commerce opportunity, especially if it can beat expectations in its earnings report later this month.

Beyond the fourth-quarter earnings report, a number of catalysts seem to favor the company, including a surge in e-commerce adoption, the bankruptcy of many brick-and-mortar apparel chains, and rapid growth in direct buy, the curated menu of items that shoppers can buy directly, which could prove to be the best use of the company's recommendation algorithm.

Management already called for a return to revenue growth in the fourth quarter and positive free cash flow. At a time when much of the apparel industry is still reeling, those results alone could jump start the stock from here.