It’s hard to talk about the general stock market without mentioning one or more FAANG stocks. The tech giants make up a sizable portion of the S&P 500 Index. That means many investors already have at least some exposure to them. Because the heavy weighting of FAANG stocks in indexes such as the S&P 500 gives them an outsized impact on the broader stock market, it’s worthwhile for investors to learn a bit more about them. 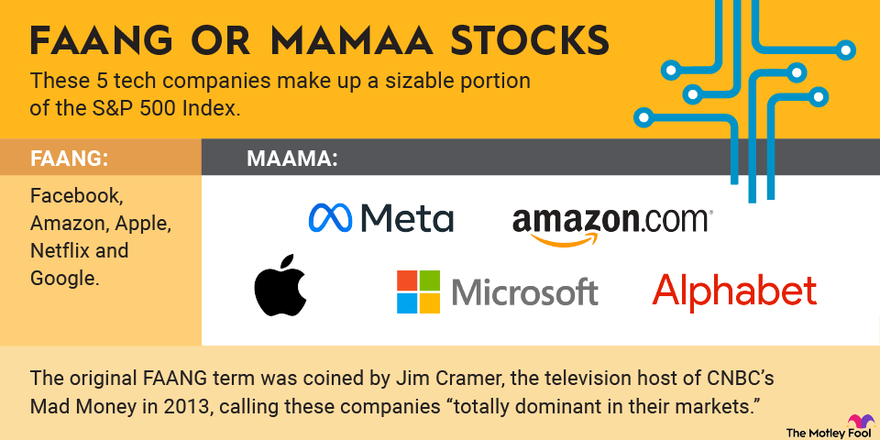 FAANG is an acronym used to describe some of the most prominent companies in the tech sector. Originally the acronym was FANG for Facebook, Amazon (NASDAQ:AMZN), Netflix (NASDAQ:NFLX), and Google. In 2017, investors started including Apple (NASDAQ:AAPL) in the group, turning the acronym into FAANG.

Despite some prominent company name changes -- Facebook is now Meta Platforms (NASDAQ:META) and Google is now Alphabet (NASDAQ:GOOGL) (NASDAQ:GOOG) -- the acronym stuck. But with Netflix falling out of favor with investors and the strength of another tech giant, Microsoft (NASDAQ:MSFT), some have started talking about a similar group of acronymed stocks -- MAMAA -- meaning Meta, Apple, Microsoft, Amazon, and Alphabet.

Over the past decade, the FAANG stocks and Microsoft shares have grown faster than the overall S&P 500 or the more technology-focused Nasdaq. The original four FANG stocks were all internet-based companies, but the later inclusion of Apple -- primarily a consumer hardware manufacturer -- made FAANG a broader group of technology stocks. The inclusion of Microsoft in MAMAA cements the mega-cap tech focus instead of the internet focus of the original group.

Microsoft started out licensing its Windows operating system to PC manufacturers, but it’s a much broader company 40 years later. Windows licensing sales are now dwarfed by its cloud computing operations, Azure, and its Office productivity suite. The company also operates a gaming segment led by Xbox and an advertising business across its search engine, web portal, and LinkedIn social network. It also operates a relatively small consumer device segment.

The five FAANG companies combined account for approximately 15% of the S&P 500 and about 30% of the Nasdaq 100 Index. Replacing Netflix with Microsoft bumps those percentages up to 21% and 40%, respectively.

As every investor should know, past results don’t guarantee future success. Indeed, the FAANG stocks and Microsoft all underperformed the S&P 500 in the first half of 2022 as we began a bear market. That said, FAANG companies exhibit several competitive advantages that make them appealing long-term investments. Most of the companies benefit from the network effect.

All five FAANG companies and Microsoft have intangible assets that should make them more profitable than their rivals. Facebook, Amazon, and Google have troves of user data they can tap into to target advertisements. Netflix’s move to original content and exclusive licenses makes its content library irreplicable. Apple is one of the few companies that makes both the hardware and the software for its devices -- and it is certainly the only one at its scale. It’s hard to find an enterprise operation that doesn’t use Microsoft’s Office suite. Switching costs are too high for a manager to risk his job over selecting another suite of services and retraining everyone on how to use it.

These competitive advantages can make the FAANG (or MAMAA) stocks great potential investments. Still, investors may want to examine each stock’s valuation relative to its own historical value and that of comparable competitors before buying.

Chips are the building blocks of the technology we use every day.

No fund or exchange-traded fund (ETF) contains FAANG or MAMAA stocks exclusively. However, the NYSE FANG+ index tracks the five FAANG stocks and five other tech and tech-enabled leaders, including Microsoft.

In November 2019, BMO Financial Group issued an exchange-traded note that tracks the FANG+ index. It trades on the NYSE Arca exchange under the ticker FNGS (NYSEARCA:FNGS). Owning it is the simplest way for investors to gain added exposure to the returns of FAANG stocks. The ETN has an expense ratio of 0.58%.

With such a small index, investors may be better off building their own portfolio of FAANG or MAMAA stocks and avoiding the ETN expenses -- especially now that most discount brokers charge no commissions and allow fractional share purchases. Building your own portfolio also allows you to optimize stock purchases and sales for your own unique capital gains tax situation.

Considering they’re a major component of the S&P 500, FAANG or MAMAA stocks probably already play at least a small role in your portfolio. But if you want additional exposure to these excellent companies, you can buy the FANG+ ETN or simply dedicate a portion of your portfolio to the stocks themselves.