Augmented reality (AR) aims to enhance our natural world through technology. The interactive experience uses computer-generated information to enrich what we perceive in the natural world.

The AR market is growing fast as more companies and people embrace this technology. According to data by research company Markets and Markets, the AR market will top $60 billion by 2023. That's up from only $4.2 billion in 2017.

Many companies are working toward capturing a slice of the AR market. Here's a look at some of the top augmented reality stocks.

Snap developed the popular social media app Snapchat. The tech stock has been making a big push into augmented reality. Snapchat created lenses, which are AR animations that can change the sound of a person's voice or their appearance as they move on a screen. More than 170 million people -- about three-quarters of the company's daily users -- access this feature each day.

Snap is aiming to push even deeper into AR with Spectacles. According to Snap co-founder and CEO Evan Spiegel, Spectacles will be the "first pair of glasses that bring augmented reality to life." They represent an upgrade from its prior attempts at AR glasses, featuring 30 minutes of operating time and an immersive lens experience.

Etsy is an online marketplace where people can buy and sell a variety of handcrafted products. The internet and direct marketing retail stock wants to use AR to allow shoppers to test out products before buying them. They can now see how artwork such as paintings, photography, and prints will look on their walls using the AR feature on their Etsy iPhone app.

While the company is initially using AR for wall art, it aims to expand its AR feature into other product categories. Further, it plans to eventually make it available to Android users. By providing customers with a more visual shopping experience, AR should enable Etsy to convert more sales because customers will have more confidence about how a piece might work in their space.

Google is using AR in various ways. For example, Live View on Google Maps allows users to quickly orient themselves to the area around them and know which way to go via directions overlaid on the live screen of their surroundings. Meanwhile, Google Lens allows users to search what they see. They can scan and translate text, search for an item that caught their eye, or identify plants and animals. The company's AR technology is making it easier for people to discover the world around them. 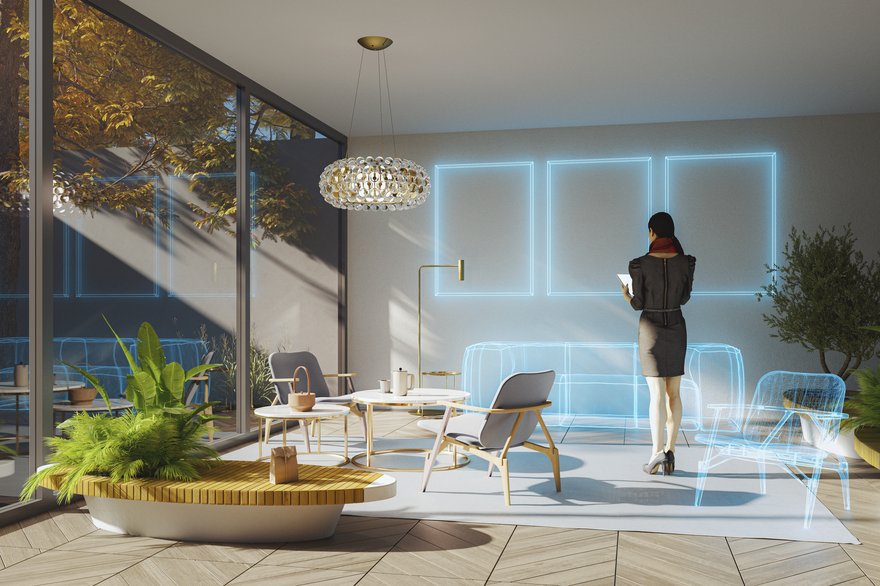 Apple is a leader in developing technology with the goal of making life easier. It's increasingly using AR to enhance the physical world. Apple has the world's largest AR platform, with hundreds of millions of AR-enabled devices, as well as thousands of AR apps available on its Apps Store. Users can download AR-enabled apps such as Snapchat, IKEA place, iScape, and others that enhance the physical world through an iPhone or iPad.

In addition, the company is exploring many ways to use virtual reality (VR) and augmented reality. For example, like Snap, Apple is developing wearable computing technology. It could launch its first AR product, Apple Glasses, in 2022.

Nintendo was an early leader in using AR for video games. It helped bring AR to the masses through Pokemon Go. In addition, its Nintendo 3DS family system allows users to play AR games. Users place an AR card on a flat surface, point the outer camera of the system at the AR card, and the card will bring new worlds to life in 3D.

Nintendo is continuing to roll out AR-enabled games. One of its latest is Mario Kart Live: Home Circuit on the Nintendo Switch. It has also partnered with Niantic, a Google spinoff that initially developed Pokemon Go, to develop AR smartphone apps. That venture aims to create new AR games so Nintendo doesn't lose gaming time to other smartphone apps.

Qualcomm is working to build the foundational technology needed to make AR a reality. This technological base includes immersive 3D graphics, computer vision, machine learning, intuitive security, and 5G technologies. The company's Snapdragon XR1 Platform is an end-to-end computing solution that can power the AR world.

Nvidia is also working on the technology needed to make VR a reality. For example, Nvidia Cloud RX delivers VR and AR across 5G and Wi-Fi networks. It allows users to stream AR through devices without using wires.

Nvidia is also developing technology that incorporates AR into cars. The Nvidia Drive AR processor gathers information and displays it for a driver using AR. The system will show things such as driving stats, points of interest, alerts, and other information.

Augmented reality is quickly becoming more mainstream as companies develop new uses for the technology. Because of that, AR-focused companies could be big winners in the coming years. That makes the space one that investors won't want to overlook.

What Is a Market Maker?