Please ensure Javascript is enabled for purposes of website accessibility
Log In Help Join The Motley Fool
Free Article Join Over 1 Million Premium Members And Get More In-Depth Stock Guidance and Research
By Leo Sun – Sep 9, 2020 at 8:30AM

The COVID-19 crisis is lighting a fire under the big box retailer's business.

Back in 2012, Best Buy (BBY) was in serious trouble. It was losing customers to Amazon (AMZN -0.19%) as shoppers used its stores as "showrooms" to test out products before buying them online. CEO Brian Dunn, who led the retailer for three years, also abruptly resigned due to an inappropriate relationship with an employee.

At the time, Best Buy seemed destined to become another victim of the retail apocalypse. But Dunn's successor, Hubert Joly, turned the struggling retailer around by fixing broken inventory systems, investing heavily in employee training, matching Amazon's prices, and embracing its "showroom" reputation by renting out its space to top brands like Apple and Samsung. 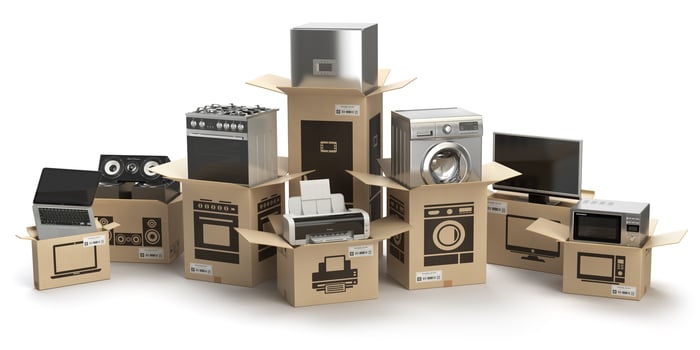 Like Walmart (WMT) and Target (TGT 0.68%), Best Buy expanded its e-commerce platform and turned its network of brick-and-mortar stores into pick-up and delivery points for online orders. These aggressive "Renew Blue" strategies reversed Best Buy's decline, and its stock rallied over 260% under Joly's seven-year tenure, which ended last June.

Joly's successor, Corie Barry, stuck to that playbook and led Best Buy through the COVID-19 crisis relatively unscathed. Many of its stores stayed open, its online orders surged, and the shift toward remote work and online education boosted its sales of PCs and other consumer electronics.

Those tailwinds lifted Best Buy's stock more than 60% over the past 12 months. But does Best Buy's stock still have room to run in this frothy market? Let's take a fresh look at the retailer to see where its stock could be headed over the next year.

Best Buy classifies its total revenue as "enterprise" revenue. It generated 92% of its enterprise revenue domestically last year, and the remaining 8% came from international markets. Best Buy also reports its online domestic sales separately from its total domestic sales. Here's how it performed, based on those four core metrics, over the past five quarters:

The COVID-19 crisis took a big bite out of Best Buy's comps growth in the first quarter of 2021, which ended on May 2. That slowdown wasn't surprising, since the pandemic forced Best Buy to temporarily close some stores and only provide curbside pickup options for its open locations. Nonetheless, its international business remained stable and its online sales surged, fueled by robust demand for its curbside pickups.

In the second quarter, which ended on June 30, Best Buy reopened most of its stores with social distancing and mask requirements. The pent-up demand for new home electronics, amplified by stay-at-home, remote work, and online education needs, sparked a significant acceleration in both its brick-and-mortar and online comps throughout the second quarter.

But can it maintain that momentum for another year?

Best Buy didn't provide any guidance for the rest of the year, but CFO Matt Bilunas noted that there was still "heightened demand" for its products and services in the third quarter during its second-quarter conference call.

Bilunas expects Best Buy's sales to grow year-over-year in the third quarter but warned that its sales would probably not continue rising at its rate of "approximately 20%" in the first three weeks of August, which was still being amplified by remote work and online education needs. Bilunas warned it was still "difficult" to gauge "how sustainable these sales trends" were, since the ongoing pandemic, future government stimulus measures, and volatile employment and spending trends could all impact its sales.

Best Buy's surging online sales notably reduced its domestic gross profit margin year-over-year in the first half of 2020, due to higher fulfillment expenses, and could continue throttling its earnings in the second half of the year. In short, its online business is a double-edged sword that sacrifices its gross margins for stronger revenue growth -- but it widens its moat against Amazon, Walmart, and other rivals.

That slowdown wouldn't be surprising, and Best Buy's long-term prospects remain bright. The pandemic tested the resilience of Joly's "Renew Blue" strategies, but Best Buy is clearly weathering the storm much better than many of its retail peers.

The stock still looks surprisingly cheap at 16 times forward earnings, so I believe it could head higher over the next 12 months as its sales normalize, the margin pressure from its feverish online business eases, and it resumes the buybacks it suspended earlier this year.

How to Score a Cheap TV This Holiday Season