Recent gains by Chewy and FreshPet show there may be potential in the plan.

Petco Animal Supplies, a privately held pet retailer which sells small animals as well as pet food and other pet supplies, may be put on sale or launch an IPO in 2021, according to news first broken yesterday by Bloomberg. The enterprise, which has 25,000 employees and 1,500 locations across North America, is said to have a value (including debt) of approximately $6 billion, making its IPO or sale a potentially major event in the pet retail industry.

In addition to its sale of supplies and small pets such as hamsters, many of its locations feature veterinary services, which are integrated with a digital pet medical advice service, PetCoach. While Petco is headquartered in San Diego, it is currently jointly owned by the Canada Pension Plan Investment Board and Luxembourg-based private equity firm CVC Capital Partners. 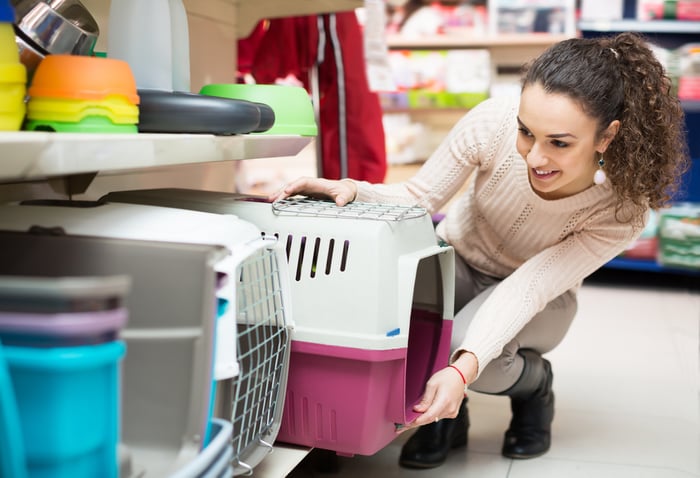 The fortunes of competitors Chewy (CHWY 2.83%) and FreshPet (FRPT -3.10%), among other pet suppliers, show that pet retail is currently on the upswing following the initial COVID-19 downturn. Both companies have recently seen their shares trade at their highest prices ever.

Strongly positive tailwinds in the pet retail industry may make this a good time for Petco to launch an IPO. According to figures reported by Seeking Alpha, Chewy has seen its share prices soar 113% during 2020, while FreshPet has gained 600% since its own 2014 IPO. However, Petco will also face stiff competition, such as that offered by privately held pet retail giant PetSmart, which recently inked a same-day delivery deal with DoorDash and is currently the biggest North American company in the sector, with billions in annual revenue.

Why Shares of Baidu, RLX Technology, and Lufax Holding Are Rising This Week