Please ensure Javascript is enabled for purposes of website accessibility
Log In Help Join The Motley Fool
Free Article Join Over 1 Million Premium Members And Get More In-Depth Stock Guidance and Research
By Adria Cimino – Sep 11, 2020 at 9:05AM

Robinhood investors may be looking for a near-term gain -- but these shares make an even better long-term investment.

Although there are bargains around after last week's market sell-off, I'm looking now at two stocks that actually resisted the movement, ending the week little changed. Why? Because that, along with their gains in weeks prior, are signs they are on the way to recovery after losses earlier in the year. I'm not alone in favoring these two stocks -- they are among the top 100 stocks most purchased by investors on the Robinhood platform.

Robinhood investors often bet on shares they think might offer a quick gain. But in this case, they've selected two solid long-term players that will benefit as business in the U.S. picks up again. 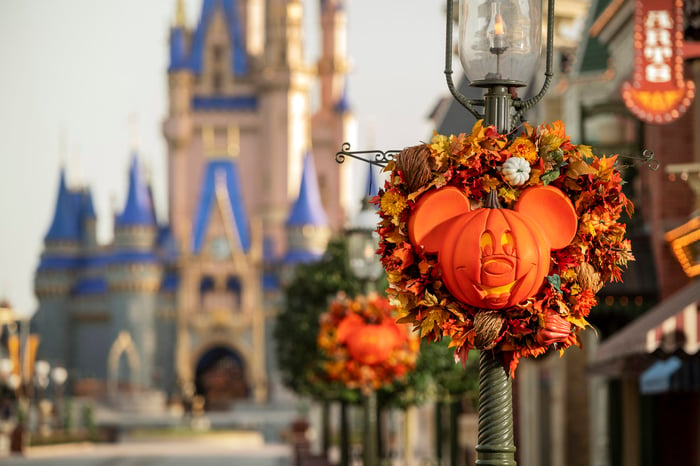 I wasn't ready to recommend Disney (DIS -0.53%) a couple of months ago. Right before the company reopened its Orlando, Florida theme parks, the state reported a spike in COVID-19 cases. In fact, Florida became the U.S. epicenter.

Though social media reports showed crowds at the Magic Kingdom and Disney's other parks over the recent Labor Day weekend, this doesn't mean the parks are out of the woods yet. We should expect lower attendance into the foreseeable future as the rest of the coronavirus pandemic plays out. In the fiscal third-quarter report, Disney said the adverse impact of the outbreak on segment operating income across the company's four businesses totaled $2.9 billion.

Recovery at the parks will take time. But gains in the direct-to-consumer and international business as well as the media networks business may be quicker. The recently launched streaming service Disney+ is part of direct-to-consumer, and has helped bolster the company through these difficult times. The service was launched last November and now has more than 60.5 million paid subscribers worldwide. That puts Disney way ahead of its original goal of at least 60 million subscribers by the end of fiscal 2024. As for media networks, the return of live sporting events should offer a near-term boost to revenue. Disney said ad sales in the fourth quarter -- especially from the NBA -- should benefit its sports channel, ESPN.

So, while the theme park situation will be slow to recover, Disney's other businesses may get the ball rolling. The stock has gradually rebounded 59% from its low in March. From a long-term investment perspective, now is a good time to begin adding Disney shares to your portfolio.

Nike (NKE 0.22%) had a rough time during the coronavirus outbreak -- most stores temporarily closed and sporting events worldwide were cancelled or postponed. During the fiscal fourth quarter, 90% of Nike stores across major regions of operations were closed for two months, and total sales fell 38%. Still, this favorite among athletes and sports fans managed to score big when it came to online sales. Nike's digital sales climbed 75% and represented 30% of total revenue.

The maker of athletic gear plans to report first-quarter earnings on Sept. 22. As of June 25, 90% of Nike stores worldwide had reopened, so we clearly can expect an improvement in physical store sales in the upcoming report. And some athletic events have resumed, offering another boost as fans buy souvenirs and other gear.

Last quarter, Nike said it was launching its Consumer Direct Acceleration strategy to build on the original direct-to-consumer effort that began in 2017. The plan is to connect data, inventory, and membership to offer the customer the best experience. We might expect digital sales growth to slow after quarters when stores were closed. But this new plan should keep any slowdown to a minimum.

Overall, recovery won't happen overnight. Consumers are still staying close to home as the coronavirus pandemic continues across the country, and job losses mean some people may be limiting purchases of discretionary items. Still, investors have begun betting on a recovery. Nike's shares have rebounded 79% from their March low. The stock trades at 71 times trailing 12-month earnings -- but at 47 times forward earnings. So if Nike can meet or beat earnings estimates, today's level offers a reasonable entry point for the long-term investor.