A successful digital strategy and the release of new, innovative footwear help to prepare the sports giant up for a strong recovery once the pandemic recedes.

Shares of Nike (NKE 1.29%) rose 14.6% in August, according to data provided by S&P Global Market Intelligence.

The sports footwear company's shares hit an all-time high back in February before plunging when the coronavirus pandemic spread across the globe. Six months later, the shares have now recovered to hit another all-time high. 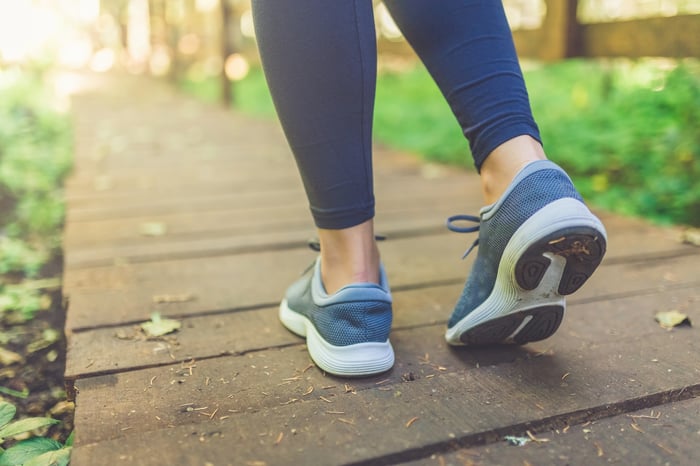 As economies and countries slowly began opening up, Nike reported that by late June, around 90% of Nike-owned stores had reopened. Yet despite the closures, the company has shown that it has managed to successfully leverage its digital platform to replace lost sales. Impressively, digital sales jumped 75% year over year in Nike's latest quarter, a testament to its brand strength and investments in boosting its digital presence.

And, of course, there is Nike's crown jewel: its now-famous ZoomX Vaporfly Next%, which is now at the top of the list of most desirable running shoes for athletes and shoe collectors. Nike has set the bar even higher by allowing customization of these shoes for a slightly higher price point of $270.

CEO John Donahoe has emphasized that Nike's new digital strategy, aptly named "Consumer Direct Acceleration," can help the company to streamline its operations and encourage greater customer engagement. The company has reached its goal of 30% digital penetration two years earlier than expected, and its goal is to reach 50% digital penetration soon.

The continued release of innovative new products and a pivot of its corporate strategy will help to realign Nike for a strong recovery once the pandemic has passed. The company's strong competitive position stands it in good stead to weather this crisis and emerge stronger.