Please ensure Javascript is enabled for purposes of website accessibility
Log In Help Join The Motley Fool
Free Article Join Over 1 Million Premium Members And Get More In-Depth Stock Guidance and Research
By Jim Halley - Sep 13, 2020 at 8:08AM

The company's share price is down more than 60% for the year, but could positive news on its new nonalcoholic steatohepatitis (NASH) drug make an investor a millionaire?

Intercept Pharmaceuticals (ICPT -0.66%) is like a lot of biopharmaceutical stocks: It's not making money, but all it takes is one major drug to turn things around.

Intercept, founded in 2002 and headquartered in New York City, focuses on the treatment of progressive non-viral liver diseases. It may have a blockbuster drug in Ocaliva (obeticholic acid), which is a once-daily pill currently used to treat primary biliary cholangitis (PBC), a disease caused by damage to the liver's bile ducts. PBC is relatively rare -- 65 of every 100,000 women and 10 of every 100,000 men in the U.S. have the disease, according to the National Institute of Diabetes and Digestive and Kidney Diseases (NIDDK).

However, Ocaliva is also being looked at to treat nonalcoholic steatohepatitis (NASH), a type of non-alcoholic fatty liver disease. According to the NIDDK, there is no drug that has yet been approved to treat NASH; for the most part, physicians treat it by asking patients to lose weight to reduce body fat and diminish symptoms. 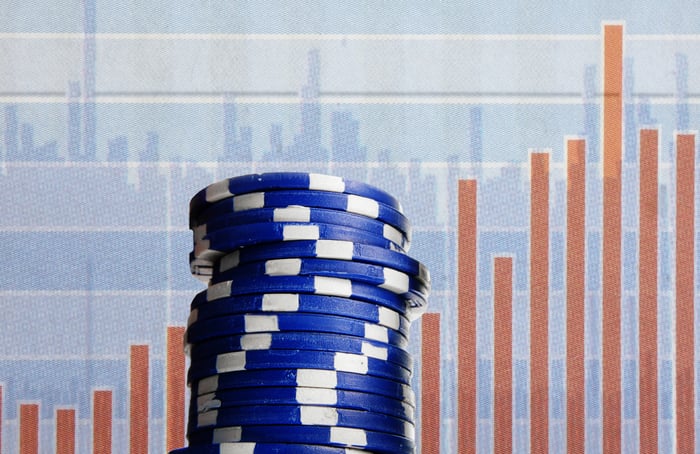 If Intercept gets approval to treat NASH patients with Ocaliva, that would be a huge deal -- 12% of the U.S. population, or almost 40 million people, have the disease, according to the NASH Education Program. The global NASH market could reach $18.3 billion in six years, according to a report by GlobalData.

Plenty of warning signs around the stock

The second concern for Intercept is that it is still losing money -- $63.3 million in the second quarter, to be specific. That's an improvement over the $74.4 million it lost in the same period last year, but still a problem. The third concern is that Intercept has only one profitable drug at this point in Ocaliva, which was responsible for all of the company's revenue in the second quarter.

However, those who see the glass as half full can find positive signs in Intercept's financials. Revenue growth is the most important metric for any growth stock, and Intercept's Q2 revenue of $77.2 million was up 16% year over year. It also marked the third consecutive quarter in which the biotech company has improved revenue, and it will likely be part of the sixth consecutive year of revenue growth for Intercept.

Management also noted that they've cut some expenses; at the company's burn rate of $63.3 million a quarter, its current $540.6 million in cash should last more than two years. 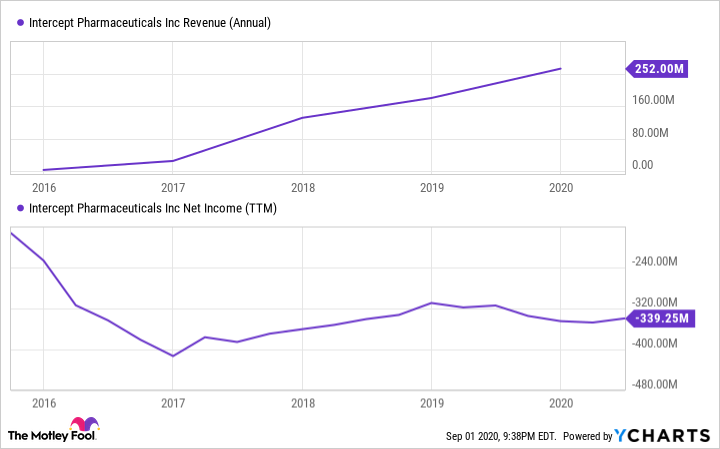 The battle in getting Ocaliva approved for NASH

On June 29, Intercept received a response from the U.S. Food and Drug Administration (FDA) regarding Ocaliva's use in treating NASH. It said the FDA had reviewed the drug's phase 3 study but was holding off on accelerated approval, noting that in the agency's view, the drug's benefits were uncertain and did not outweigh its risks, and more study was required. (Some of the known risks for Ocaliva in treatment of PBC are fatigue, severe itching, rash, and abdominal pain.)

Last week, Intercept fired back, saying that a further look at the data from the study in question showed that NASH patients using Ocaliva saw long-lasting liver chemistry improvement and less liver fibrosis (scarring) over two years of treatment. It added that while the most common side effect of the drug was extreme itching, there were few serious, consistent side effects.

Could the stock be a millionaire-maker?

The short answer is yes. The company has one year to respond and address the FDA's concerns about Ocaliva. If it can satisfy the FDA and the agency approves Ocaliva for treatment of NASH, Intercept's stock price would climb immediately and considerably. Even without the approval, the stock has been as high as $125 in the past 52 weeks, and it certainly could go higher than that.

However, this is clearly a risky play. There are at least 20 other drugs that are in trials for the treatment of NASH. Ocaliva would need to overcome not only the concerns about its side effects, but the FDA's desireto make sure the first drug it approves for NASH is the best one. That's a high bar. The company itself showed how risky things might be by laying off 170 workers -- 25% of its workforce -- on Thursday. Investors looking at Intercept should realize the investment may not pan out and proceed with caution.