It's easy to understand the visceral temptation of investing in penny stocks. Because they trade for less than $5 a share -- and sometimes less than a buck -- relatively small increases in their share prices may produce large percentage gains for those who hold them. And at those prices, even investors without a large amount of money to deploy can buy a fair number of shares.

However, it's important to remember why penny stocks are so cheap in the first place. These companies may be young and unproven. Or such a low-priced company may have been in operation for years, but have experienced significant deterioration in its business, or lost its competitive edge.

Contrast this with larger, well-established companies that are trading at higher prices. Although in a strictly per-share sense, such stocks are less affordable, their businesses are more likely to be on a strong growth trajectory, justifying their higher valuations.

You would be well-advised not to waste their time and money on risky penny stocks. Instead, I'd recommend turning your attention to these three promising companies. 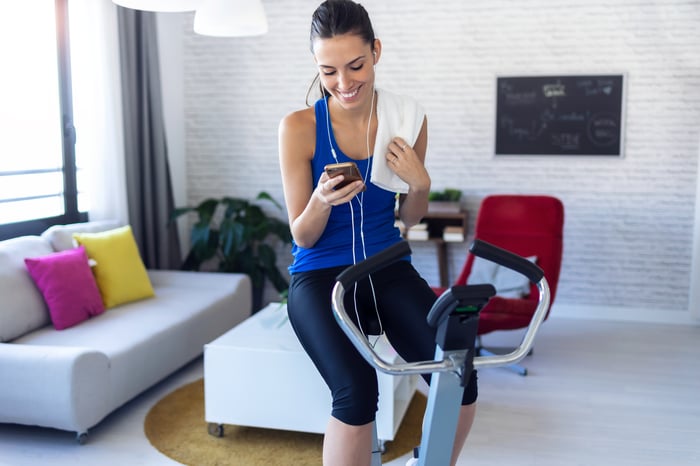 Peloton (NASDAQ:PTON) sells high-end, internet-connected home exercise equipment such as stationary bicycles and treadmills, as well as a subscription service that gives people access to online workout routines conducted by professional trainers. The COVID-19 pandemic, which shut down gyms across the country, created a surge in demand for Peloton's wares; for the fiscal year that ended June 30, the company's subscription revenue doubled from $181.1 million to $363.7 million.

Sale of connected fitness products jumped three-fold for Peloton to $485.9 million in its fiscal fourth quarter, and for the first time turned a profit, with net income of $89.1 million. The number of fitness subscriptions almost doubled from a year ago to 1.1 million, while total workouts in the quarter soared more than four-fold to 76.8 million.

With wide-scale telecommuting seemingly becoming a permanent fixture of the working world, Peloton's business looks set to continue booming. In just one year, Peloton's membership base more than doubled from 1.4 million to 3.1 million members, and this momentum seems set to continue into its next fiscal year. In response to all this, the company recently announced an expansion in its product suite.

Peloton has a strong edge when it comes to home fitness, as it's been in the business for eight years and has built up a loyal following to boot. Upscale fitness lifestyle brand competitor Lululemon (NASDAQ: LULU) recently purchased home-fitness start-up Mirror for $500 million to break into this market, likely in an attempt to snap up the attractive and up-and-coming market share. However, Mirror has a lot of catching up to do, as it was only founded back in 2018 and has "tens of thousands of subscribers" according to chief executive Brynn Putnam. Peloton's over 3 million membership base looks poised to capture more market share as the home exercise trend demand grows.

The company's valuation may seem lofty at around 76 times annualized fourth-quarter earnings, but note that this is because the company just turned profitable in its latest quarter and with the surge in members and a new, expanded product line, future earnings may rise significantly.

Financial services giant Mastercard (NYSE:MA) has a total of 2.6 billion debit and credit cards in circulation globally. But the COVID-19 pandemic has reduced consumer spending and business activity worldwide, and as a result, the gross dollar volume of transactions across the company's network fell by 10% year over year in the second quarter to $1.4 trillion.

The company is keeping close tabs on how the pandemic is evolving and the actions taken by various governments, though. It publishes weekly operating metrics on switched volume and cross-border volume. Switched volume refers to the number of transactions logged by the company that uses Mastercard branded cards, while cross-border volume refers to transactions where the country code of the merchant differs from the country code of the cardholder. According to its latest report, for the week that ended Aug. 28, switched volume globally was up 3% year over year, although cross-border volumes remain weak -- down 35% year over year. These numbers show a recovery in spending across various regions of the world, not just in the US. However, it's natural for cross-border volumes to stay depressed as countries still have travel curbs to prevent the spread of the virus. This points to a gradual but sustained improvement for Mastercard's business.

Mastercard is also actively partnering with banks and other companies to grow its business as it waits for a sustained recovery in spending. Last week, it partnered with HSBC to develop an approach to green financing around sustainable infrastructure projects, expanding on the global alliance to mobilize transit financing that was launched last fall. And in early September, Mastercard partnered with TSYS, now part of financial giant Global Payments, to offer consumers more payment choices for installment plans that help to simplify the payment process for them. Essentially, this collaboration allows customers more flexibility to choose when they wish to take up an instalment plan, whether it be at pre-sale, point of sale, or post-sale.  The company devised this arrangement when its own research uncovered the fact that 75% of Americans who have tried installment plans for the first time plan to continue using them even after the pandemic is over.

Apple (NASDAQ:AAPL) needs no introduction, a veteran computer company that was also one of the pioneers in the smartphone space, essentially opening up an entirely new industry since it launched the first iPhone in 2007. In its fiscal third quarter, Apple achieved year-over-year growth in all of its product and service categories, pushing total sales up by 11% to $59.7 billion.

The Services division, which consists of a variety of services such as iCloud, Apple Music and the App Store, grew by around 15%, and provided 22% of Apple's total revenue for the quarter, up from 21.3% a year ago. As the segment's gross profit margin is above 60%, the growing contribution from it should help slowly lift the entire company's gross margin. With services working on a subscription model, this means that Apple can build up a sturdy base of recurring income, a definite plus point for investors who are worried about the lumpiness of product sales for its iPhone, Macs and iPads.

Services also has much more room to grow as Apple broadens its offerings to include Apple TV, News+ and Apple Card. While these services may not contribute much to Apple's revenue or bottom-line at the moment, its huge customer base means the potential for higher contributions in future cannot be ruled out. Although competition remains keen with companies such as Disney (NYSE: DIS) coming up with Disney+, Apple should be able to hold its own as it taps on its strong ecosystem and loyal fans.

Investors are eagerly anticipating a special announcement this week, where Apple is expected to announce the company's first 5G smartphone, the iPhone 12, as well as new Apple Watches and an updated iPad Air, among other things. With the company being known for its cutting-edge products and cool designs, investors should anticipate healthy demand for its stable of new products.