The cloud software behemoth exhibited an opportunistic bent over the summer.

Some of the highest-quality technology stocks deliver double-digit revenue and earnings growth on such a dependable schedule that investors can be easily lulled into following numbers alone; that is, we can focus too much on the quarterly cadence of earnings results versus expectations and ignore the narrative behind a company's sustained success.

This is never quite a safe practice, as losing a grip on why a dominant company outperforms can set investors up for unpleasant surprises if its competitive advantages and market position begin to erode. It's especially critical to delve into outperformance during such an anomalous year as 2020.

Take the ubiquitous provider of cloud-based creativity and document tools, Adobe (ADBE -0.69%), which reported on its fiscal third quarter of 2020 on Sept. 17. Adobe recorded year-over-year top-line growth of 14% in the last three months, notching a record $3.2 billion in revenue. The company's digital media segment, which includes its "Creative Cloud" and "Document Cloud" software suites, expanded by 19%. This momentum made up for a more modest 7% revenue advance in the smaller "Digital Experience" segment, which continued to experience weaker advertising sales. Adobe was able to transfer its sales success directly to the bottom line: Net income jumped 20% against the prior-year period, to $955 million. 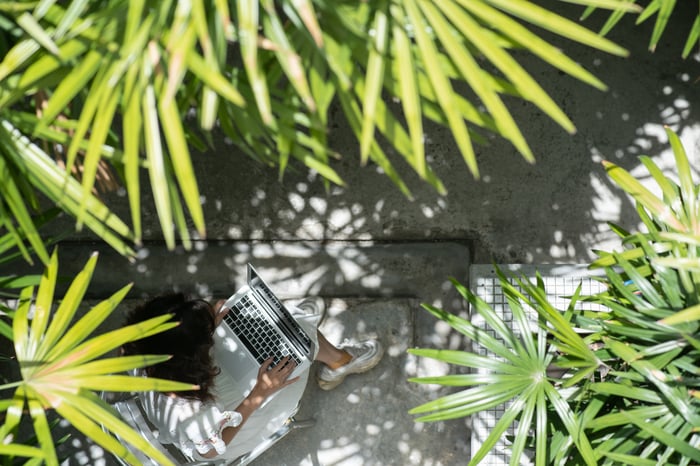 Normally, the fiscal third quarter is a seasonally soft period for Adobe, as it stretches over the summer months of June, July, and August. This summer, the company benefited from a much bigger pool of potential retail and corporate purchasers than normal, as U.S. businesses remained for the most part in remote-work mode, and typical levels of summer vacation travel were curbed over the last few months.

Adobe reacted aggressively to changed conditions during these months, utilizing internal technology to take full advantage of the sales opportunity arising from more home-bound prospects. In prepared remarks during the quarterly earnings conference call, CFO John Murphy noted that Adobe's data-driven operating model provided it with real-time insights to understand where it could reap the highest return on investments, and the methods by which it could drive engagement and sales conversions online.

More specifically, Adobe utilized its proprietary "attribution" technology to drive results. Attribution is an analytics-based marketing tool that follows a user's engagement across multiple channels, and pinpoints the various images and content structures the user has dwelled on or otherwise interacted with. Over a large sample of users, trends emerge and predictive steps are formulated that can increase conversion if acted upon. Murphy stated the following:

Utilizing our proprietary attribution technologies, we made variable marketing investments that enabled us to attract and engage new customers, delivering the strongest Q3 on record for Adobe, while at the same time maintaining fiscal discipline to accelerate earnings growth.

A quick check of Adobe's supplementary earnings materials for the quarter backs up Murphy's claim that the data-driven marketing investments were efficient and promoted earnings growth. Cost of revenue in the digital media segment grew by 17.5% year over year during Q3 2020, which is lower than the segment's revenue expansion rate of 19% mentioned above. Adobe certainly reaped leverage from its marketing investments this quarter.

By relentlessly pursuing higher sales of its already-dominant creative and document products, the software-as-service giant is beginning to accrue significant financial advantages. Operating cash flow hit a record $1.4 billion this quarter. Equally impressive, remaining performance obligation (RPO), which is the sum of deferred revenue and future contracted revenue not yet billed, grew 18% over Q3 2019 to $10.3 billion. This backlog is essentially equal to nearly three business quarters of future revenue recognition.

Investors may not be alone in noticing Adobe's torrid revenue expansion during a normally muted period. Potential mid-size and enterprise customers could benefit from the company's sophisticated marketing arsenal: A version of the same attribution technology used internally is available to customers as part of the growing "Adobe Analytics" software offering. Perhaps Adobe should use its own success story this quarter to promote its analytics subscription packages.