The Mac maker is taking a shot at Spotify.

Apple (AAPL 4.86%) unveiled its long-anticipated Apple One subscription bundle earlier this week, offering discounts for consumers that sign up for multiple services, with pricing ranging from $15 to $30 per month. Bundling services together is a time-tested strategy to boost retention and reduce churn, while encouraging new users to sign up for the savings.

Apple Music is the clear anchor for Apple One, overshadowing the other included services. Here's why. 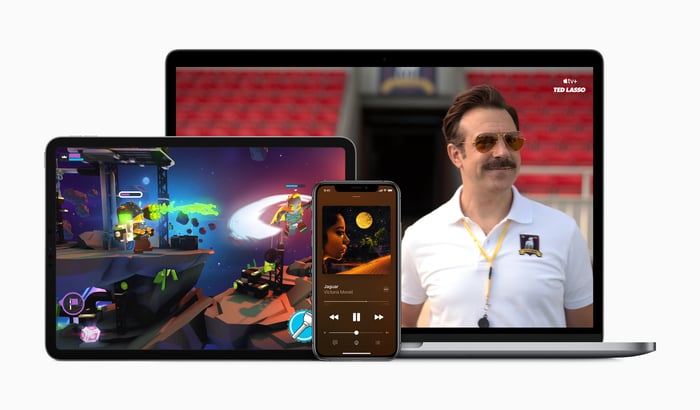 Music streaming plus a bunch of mediocre services

For starters, here's a breakdown of the different tiers.

If you look at the services other than Apple Music, the simple truth is that they're not particularly competitive or they lack broad appeal.

The Cupertino tech juggernaut gave away a free year of Apple TV+ in 2019, acknowledging that it didn't stack up well even at the aggressive price of just $5 per month. Apple Arcade is compelling at the same price point, but mobile gaming has a relatively niche audience and not everyone plays games on their phones. Cloud storage is extremely commoditized and table stakes. Nobody really signs up for Apple News+ and publishers are disenchanted. It's too early to know what Apple Fitness+, which launches later this year, will look like.

On the other hand, everybody listens to music. Apple has been a prominent stakeholder in the music industry for the past two decades and prides itself on having revolutionized digital distribution with iTunes, but Spotify (SPOT 5.75%) was an early mover in music streaming and has become the global leader in paid music-streaming subscriptions. Apple Music is mostly competitive with Spotify on its merits.

In addition to competitive implications, there are cost concerns. Standalone Apple TV+ and Apple Arcade subscriptions already support Family Sharing at no additional charge, allowing those services to be shared with up to six family members. Those services have no incremental costs associated with increased usage and engagement, unlike all music-streaming services, which must pay per-stream royalties. That's why the Family plan costs $5 more than the Individual plan per month (the costs of the extra cloud storage are negligible).

Taking a shot at Spotify

Another way to frame Apple One is that the offering is really a way to sell more Apple Music subscriptions by drastically discounting the less competitive services that are included. While Spotify reports paid subscriptions quarterly because music streaming is its core business, Apple has been suspiciously silent. 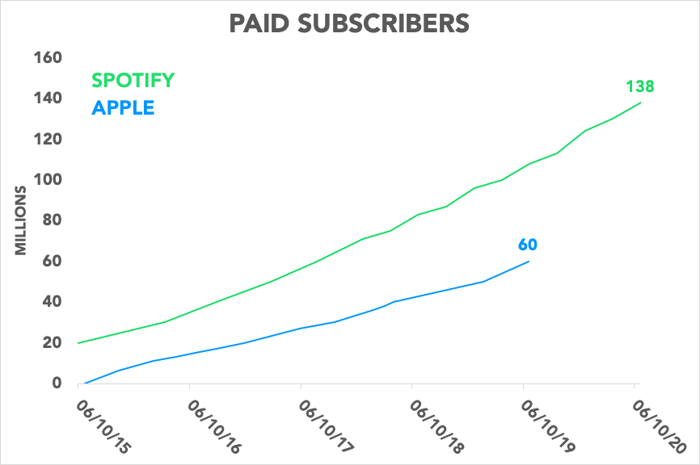 There might be some other reason why Apple hasn't given investors any updates around Apple Music subscribers. Regardless, Spotify sees Apple One as a direct threat.

"Once again, Apple is using its dominant position and unfair practices to disadvantage competitors and deprive consumers by favoring its own services," the Swedish company said in a statement following the unveiling. "We call on competition authorities to act urgently to restrict Apple's anti-competitive behavior, which if left unchecked, will cause irreparable harm to the developer community and threaten our collective freedoms to listen, learn, create, and connect."