Please ensure Javascript is enabled for purposes of website accessibility
Log In Help Join The Motley Fool
Free Article Join Over 1 Million Premium Members And Get More In-Depth Stock Guidance and Research
By Evan Niu, CFA - Updated Jun 28, 2019 at 10:21AM

The Cupertino tech giant is starting to catch up with its Swedish rival.

Apple (AAPL -0.09%) doesn't provide updates regarding its Apple Music paid subscriber base on a regular schedule. Instead, the company typically prefers to only disclose when it reaches certain milestones, like when it hit 50 million paid subscribers in January. Apple can get away with infrequent disclosures because music-streaming is not its primary business, unlike rivals such as Spotify (SPOT -2.04%), which provide quarterly updates to investors. The Swedish company said in April that it had hit 100 million premium subscribers. The future of Apple Music

French media outlet Numerama reports that Cue made the disclosure during an interview at the Apple Store Champs-Elysees in Paris, with Cue discussing other aspects of Apple Music's future. Apple Music is getting a slew of improvements in iOS 13 and MacOS Catalina, the next versions of Apple's main operating system platforms, including time-synced lyrics and an improved interface. On the Mac, the company is finally unbundling iTunes into three separate apps (Apple Music, Podcasts, and Apple TV), which should make it easier to access different types of content while providing a more focused user experience. 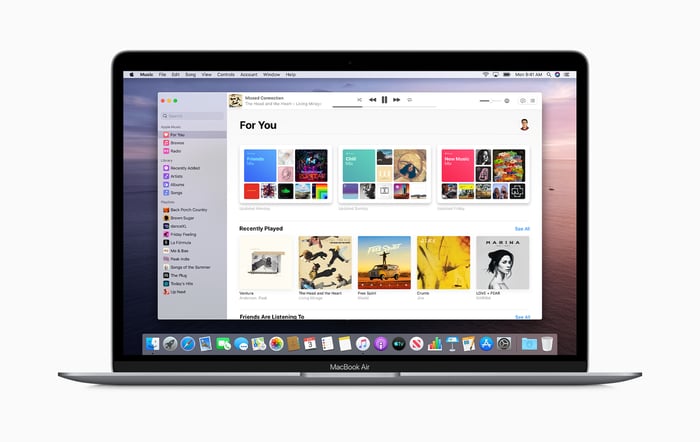 Cue said that the next release of Apple Music shows that there is always work to be done to keep improving the service. Apple is taking a hands-on approach to manually inputting lyrics as opposed to automating the process, a possible reference to recent allegations that Alphabet subsidiary Google was copying lyrics from third-party site Genius without proper attribution.

Apple is also still betting on exclusivity windows for differentiation, announcing that French rap duo PNL will release four exclusive titles on Apple Music tomorrow, according to the report. The exclusivity window will only last a week, though. Exclusivity windows in the music industry are generally quite small, as artists prefer to make their content available across platforms to boost their exposure and royalty earnings.

Regarding iTunes' forthcoming unbundling, Cue told the outlet that having three dedicated apps will make the experience much simpler, even though he is admittedly somewhat biased. Cue played an instrumental role in launching the original iTunes Store and has overseen its development and evolution for nearly two decades. The services chief notes that users don't typically switch between podcasts and music, so having separate apps is a more seamless experience.

Cue also disclosed that Apple Music is the company's largest first-party service, while declining to disclose how many subscribers other services have. Apple has been launching a bevy of new services on its march to hit $50 billion in services revenue by 2020. Earlier this year, the Mac maker also set a goal of hitting 500 million paid subscriptions at some point in 2020, after finishing the first quarter with 390 million paid subscriptions.