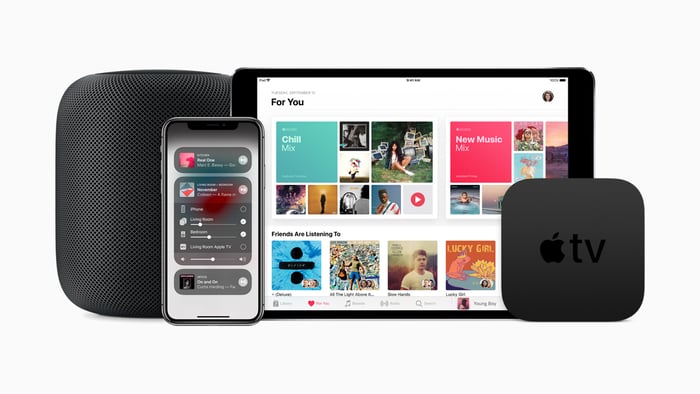 Keeping up with Spotify (relatively)

Historically, it's typically taken Apple around nine to 10 months to add 10 million paid subscribers, although it went from 30 million to 40 million in about six months. That particular growth spurt could be attributable to launching in additional countries and expanding availability of the discounted student tier to over 80 markets in early 2018. Overall, you can see Apple maintaining a relatively stable trajectory since launching the service in 2015. 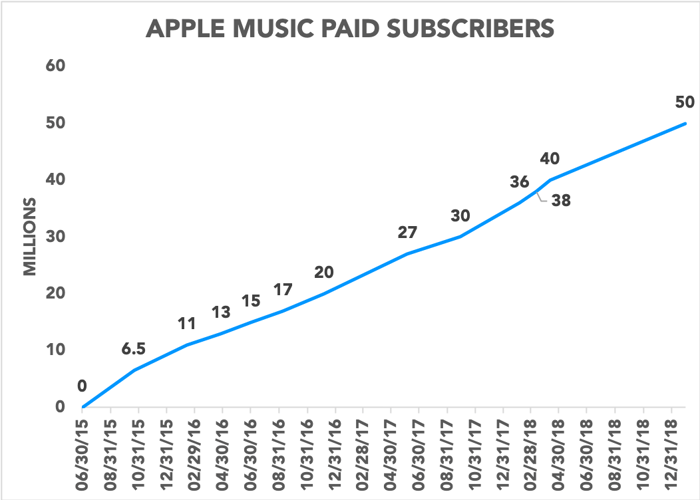 Here are a few other ways to look at the subscriber base. If Apple had 50 million total users in May 2018, it would have hit 50 million paid subscribers by no later than August 2018 if it was able to convert all of the three-month free trials into paid subscriptions. That was five months ago, suggesting that there is a meaningful proportion of free trials that cancel before billing kicks in. Don't expect Apple to provide any official churn metrics, though.

In contrast, Spotify (NYSE:SPOT) finished 2018 with 200 million total monthly active users (MAUs). The Swedish company has not reported full fourth-quarter earnings (due out next week), which will include its premium subscriber count, but Spotify expected to end the year with 93 million to 96 million premium subscribers. Both services are growing, with Apple maintaining around half as many paid subscribers at any given time.

That also means Apple Music alone represents around 14% of the 360 million total paid subscriptions that Apple has on its platforms. An individual plan costs $10 per month, which could imply that Apple Music generates $6 billion annually. However, we don't know the average revenue per user (ARPU), and Apple also offers a student plan for $5 per month and a family plan for $15 per month.

Spotify has seen ARPU trend lower for years as more subscribers take advantage of family plans, which allow up to six users. Last quarter, Spotify reported ARPU of 4.73 euros, or about $5.43 per month. If Apple Music's ARPU is in that ballpark, the annual revenue run rate would be closer to $3.3 billion.

That says nothing of profitability. Apple's services segment enjoyed a gross margin of 63% last quarter, but there's no way Apple Music profitability is anywhere near that average. Spotify's cost of premium subscriber revenue ate up nearly 75% of sales in the third quarter, for example, mostly due to licensing and royalty costs. It's common knowledge that Apple pays artists more than Spotify does, so Apple Music's gross margin could very well be even lower than its rival's, potentially closer to 20%.