Investors came back to the biotech's shares early this week. But will the optimism stick?

Although Inovio's (INO 1.09%) shares lost half of their value in a little over a month this summer, shareholders have since given the biotech company a glimmer of hope. The stock soared 20% in one trading session this week on optimism that details from Inovio's coronavirus vaccine trials will soon be revealed and that extra funding could follow. Inovio began to fall out of favor with investors in late June when it reported interim results from its phase 1 study, from which investors had expected more detailed data than they got.

Now, investors are wondering if Inovio shares may be back on the path to major gains. From the start of the year through the June peak, the stock surged 860%. And for good reason: Inovio was one of the first players to start human trials for its vaccine candidate. Since then, other players have outpaced the clinical stage biotech from a timeline perspective. Let's take a look at where Inovio stands in the coronavirus vaccine race for some clues about the stock's prospects. 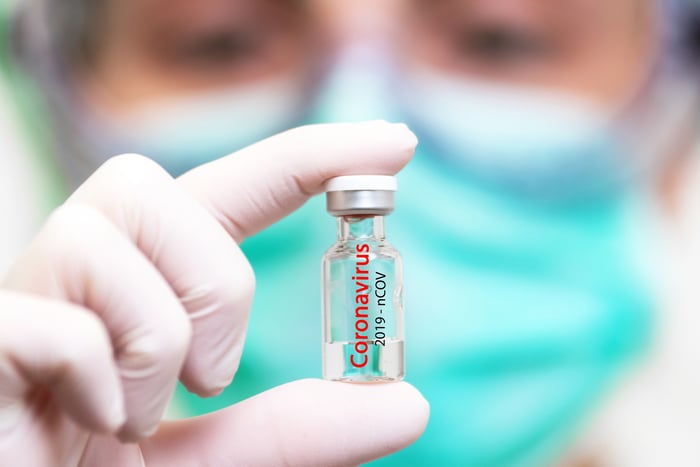 Making headlines from the beginning

Inovio made headlines earlier this year after reporting that it had designed its vaccine candidate based on the novel coronavirus' genetic sequence in a matter of hours -- three, to be exact. The company began its phase 1 clinical study in April and reported initial results in June. Investors hoped for details on the production of neutralizing antibodies, which do the work of defending healthy cells from pathogens. But Inovio simply said that 94% of trial participants produced immune response as measured by neutralizing antibody and T-cell activity. (The company more recently updated investors to say that 100% of volunteers showed immune response.)

At a conference earlier this week, Inovio's CEO Dr. J. Joseph Kim said that a peer-reviewed paper on the results would soon be available. Investors will look to that release in order to determine how Inovio's investigational vaccine measures up to those of its rivals.

Speaking of rivals, another reason for Inovio's share price woes has to do with the fact that other vaccine candidates that have moved farther ahead in clinical trials. Inovio expects to start its phase 2/3 clinical trial this month, but nine rival programs already have entered phase 3 studies. Considering the timeline alone, Inovio is unlikely to reach the finish line first or even second.

That said, if Inovio's trial results are strong, a late arrival at the finish line won't matter in the long term. Several companies' drugs will be needed to meet demand for the vaccine. For example, a big player like Pfizer (PFE -0.39%) can only supply and distribute up to 1.3 billion doses by the end of next year. Even if we only vaccinate 70% of the world population -- the percentage that is needed in order to achieve herd immunity -- that means we would need to vaccinate a whopping 5.4 billion people. Despite that reality, many investors are solely focused on who will cross the finish line first. And this could weigh on Inovio's shares in the near term.

To continue on the subject of manufacturing, Inovio shows weakness in the production area too. For instance, Moderna (MRNA 0.46%), also a clinical stage biotech company, plans on producing 500 million to 1 billion doses by next year. Inovio only aims to manufacture 100 million. This means that even if Inovio's potential vaccine is approved, the company is unlikely to capture a large portion of the market based on the number of doses it's able to distribute.

Another point of concern for Inovio is funding. Operation Warp Speed (OWS), the federal government program with a goal to deliver 300 million doses of a safe, effective vaccine for COVID-19 by Jan. 2021, has offered billions of dollars to companies, including Moderna and pharma giant AstraZeneca (AZN 1.21%). But so far, OWS has glossed over Inovio. If OWS offers Inovio funding in the coming weeks, expect share gains. If it doesn't, shares may stagnate as investors worry about Inovio's ability to pay for its coronavirus program. So far, Inovio's outside funding from other government organizations including the Department of Defense (DoD) and the Coalition for Epidemic Preparedness Innovations (CEPI) totals $110 million. Inovio's cash, cash equivalents, and short-term investments totaled $371.7 million as of June 30.

All of these weaknesses aren't totally devastating for Inovio's program or share price. In some cases, they represent opportunity. Positive detailed trial data or an announcement of outside funding clearly would put Inovio back in the news in a positive way and may push its share price higher.

As we look ahead to the vaccine approval stage, investors must acknowledge that a failure could be a serious blow to Inovio's share price. Since the company doesn't have other products on the market, investors can't rely on another source of immediate revenue to keep the company above water.

Conversely, an approval -- even one that comes after rivals have gained approval -- would be a positive catalyst for the shares. All of Inovio's candidates (including the potential coronavirus vaccine) use the same technology. Inovio's process involves encoding a DNA sequence for a specific monoclonal antibody in a DNA plasmid and delivering those plasmids intramuscularly or intradermally through a handheld CELLECTRA device. Once the plasmids enter the body's cells, the cells are enabled to produce monoclonal antibodies on their own. An approval of the investigational coronavirus vaccine may be seen as a validation of this unique method.

If you're saying to yourself, "Hm...there are a lot of 'ifs' here," you're right. That's why I say that Inovio remains a risky investment. Nonetheless, I don't think that Inovio's gains are over if the biotech company presents trial data that satisfies investors and wins more external funding. Again, more "ifs." And when there are too many "ifs," I worry that short-term boosts in share price won't turn into lasting, long-term gains.